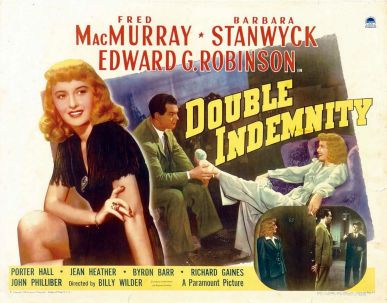 A dark Los Angeles night. A reckless speeding car is seen racing through the streets running a red light. When it comes to a screeching stop, a hunched over man gets out and enters the Pacific All Risk Insurance Co. Building. After looking at row after row of desk after repetitive desk, he goes into his private office. The man is hurt badly. Hunched over, perspiration running down his face, he begins to tell his tale into a dictaphone. His name is Walter Neff, and he is about to make a confession.

James M. Cain based his pulp fiction novella on the real life 1927 murder involving Ruth Snyder and her lover Judd Gray. Just like in the Cain story, and the Wilder film, Snyder the first woman executed in New York convinces Gray to kill her husband after she took out an insurance policy on him with a double indemnity clause. The two lovers were quickly caught. The murder became infamous when the New York Daily News published a front-page photo of Snyder strapped in an electric chair.

Cain’s story was first serialized in Liberty magazine back in 1935. His first seedy tale, The Postman Always Rings Twice, was a best seller just the year before. Various studios were interested in bringing Postman to the screen. However, by now, the powerful Production Code, headed up by Will Hays, found the material coarse and unacceptable for movie audiences. Postman would eventually make it to the screen in 1946. Similarly, Double Indemnity first met with rejection from Mr. Hays and company. In the 1940’s, Cain’s novella was published in book form with two other Cain stories. Once again the studios became interested. Some eight years after it first appeared in print, Billy Wilder found a way to make it acceptable to the guardians of moral outrage, along with some loosening of the screws from the Hays office. It turned out to be one of the greatest film noirs of all time. It’s a dark story of greed, self-righteousness, murder and sexual desires gone sour.  It’s a film filled with unlikeable characters and not one who the audience can cheer.

Wilder’s co-writer was Raymond Chandler, himself a successful author of the mean streets of noir novels like The Big Sleep and Farewell, My Lovely. On the surface, it seemed like a perfect match, but Wilder and Chandler did not work well together. Chandler was about 20 years older than Wilder and knew nothing about writing a screenplay. Wilder had to “teach” the novelist the art of screenwriting. It’s also interesting that Chandler did not think much of his fellow pulp author James M. Cain as a writer. Chandler’s distaste for Cain might have been due to jealousy with Cain’s success of his first novel The Postman Always Rings Twice. Additionally, some habits of Billy’s annoyed the elder Chandler. For example, Wilder received many phone calls from young women during the day which Chandler seemed to have resented. It was a relationship that had nowhere to go but down.

The plot focuses on Walter Neff (Fred MacMurray), an insurance salesman, who after a routine visit to the home of Mr. and Mrs. Dietrichson quickly finds himself attracted to Mrs. Dietrichson, Phyllis (Barbara Stanwyck). The discussion quickly moves from a typical car insurance policy to a fifty thousand dollar life insurance policy with a clause about double indemnity if the insurer’s death was accidental.

Phyllis is the kind of dame you can tell is trouble from the start. When Walter first meets her, she’s wearing nothing but a towel wrapped around her body. Neff quickly realizes she’s a danger zone he should not trespass on, but like a lamb to the slaughter, Walter finds himself sucked into her web of deadly sexuality. It’s all made believable by the snappy, suggestive dialogue the actors deliver with rapid speed and an edgy manner. Like Neff, we the audience are drawn in for the ride.

They are soon planning on how to murder Mr. Dietrichson and make it look like an accident. The opportunity arises when Dietrichson schedules a business trip by train.  Walter hides in the back of the Dietrichson car and kills the unsuspecting husband on the way to the train station. Walter then boards the train disguising himself as Dietrichson. At a previously arranged point on the trip, Walter jumps off the last car of the train. Phyllis is waiting nearby in the car with her dead husband in the back. They dump his body on the tracks to complete the ruse that their victim accidentally fell off the train. 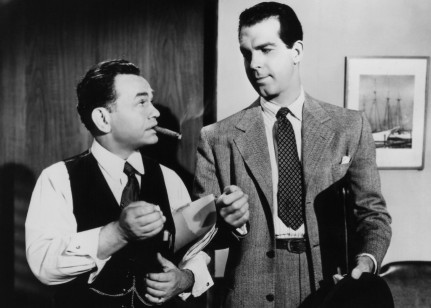 It all goes perfectly, or so it seems. The police are satisfied it was all an unfortunate accident, and close the case. However, Barton Keyes (Edward G. Robinson) the insurance company’s claims manager, and Neff’s close friend is not happy. It doesn’t feel right. His “little man” living inside his stomach tells him so, and the “little man” is never wrong.

It quickly begins to unravel when Phyllis gets anxious to claim the insurance money. Walter tells her they can’t rush; Keyes suspects something is not right. One evening when Keyes visits Walter’s apartment, he almost runs into Phyllis. Then there is Phyllis’ stepdaughter Lola (Jean Heather) who visits Walter telling him about the strange circumstances of her mother’s death in a hospital. At the time, Phyllis was the nurse in charge of Lola’s ill mother. She tells Walter how she always suspected that somehow Phyllis was involved in her mother’s death. Walter tries to convince Lola she should not say anything about this to anyone. Meanwhile, the tension between Walter and Phyllis increases when Phyllis pushes to sue for the insurance money. Soon Lola is back telling Walter she thinks her boyfriend Nino (Byron Barr) and Phyllis have been seeing each other and probably planned the murder of her father together.

Keyes and his “little man” continue to investigate soon informing Walter he has broken the case wide open with the conclusion Phyllis and Nino together killed Dietrichson. Walter goes to Phyllis’ house. Having lost all trust in Phyllis, and looking to save himself, he is intent on killing her. Killing Phyllis he hopes will put the blame for both murders right in Nino’s lap. However, before Walter can shoot her, Phyllis produces her own pistol and shoots Walter wounding him severely. He tells her to go ahead and finish him off, but she can’t do it. For the first time in the film, Phyllis shows she cares about someone. She hugs him, and tells him she loves him. Walter doesn’t buy it. Coldly, with the two still embraced, Walter, no expression on his face, shoots her. Walter makes his way back to the insurance company where he uses the Dictaphone to confess the entire tale to Keyes.  We have come full circle. Like many film noirs, the movie is told in flashback opening and closing with Walter’s confession.

As previously mentioned, there are no likable characters in the film. Walter Neff is a user. He was a crackerjack insurance agent and knew the system inside out. Overconfident in his ability, Neff felt he could beat the system. Lacking a moral compass, Neff smoothly, and coolly felt he could do anything and get away with it. Though they were close friends, Barton Keyes admired Walter for his work; they were at the opposite ends of the pole in viewpoints. Keyes is all ethics and morality. He sees no middle ground. For him, life is all black or white. He is unforgiving and narrow-minded. Forgiveness is not in his vocabulary. As for Phyllis Dietrichson, well she is one the screen’s great femme fatales, a user of men. Sexy, seductive, money hungry, willing to ruin anyone who gets in her way, a hardened, unfeeling, cold-blooded dame.

In Kevin Lally’s biography, Wilder Times the author states that Wilder called Double Indemnity a love story, but not between Walter and Phyllis, “rather, it’s the bond between Walter and his mentor.” Keyes sees Walter as an up and comer, a man with great possibilities in the insurance game. A man who can climb the corporate ladder, a man like himself. The film’s ending shows the strong bond between the two men. Walter, lying there, dying with Keyes by his side.

“Know why you couldn’t figure this one out, Keyes?” Walter says. “I’ll tell ya. ‘Cause the guy you were looking for was too close, right across the desk from ya.”

“Closer than that, Walter” Keyes tells him.

“I love you, too,” Walter replies.