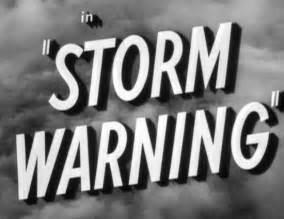 Storm Warning is not a perfect film, however, more than 60 years after its release, it still has the power and social significance to resonate with us today. Ronald Reagan reveals shades of the politician he would become later, and both Ginger Rogers and Doris Day in her first dramatic role, are admirable in the roles of sisters caught in a doomed triangle.

While it is assumed the film takes place in the Deep South, few specifics mentioned, and Southern accents are decidedly absent. To be fair, Klu Klux Klan activity was not limited to the South.  Missing in the film is the Klan’s racial hostility and religious bias. Here they seemed most concerned with keeping outsiders out of their town and their business. One has to bear in mind; Storm Warning was released in 1951 and studios did not like to offend anyone. Most likely, the Jim Crow states where racial segregation laws were still strictly enforced would have banned the film, subsequently cutting into the studio’s profits. It’s difficult to determine how hard hitting the original story and screenplay would have been before being water downed and stripped of much of its social impact. One could call the studio cowardly for such acts, but the reality is, filmmaking is a business. That said, it still took a lot of guts to make this film at the time. Like Warner Brothers earlier film, Black Legion, you just have to read between the lines.

What remains is still a tense thriller. Ginger Rogers is Marsha Mitchell a top model from New York, who while on her way to another assignment decides to stop and visit her kid sister Lucy (Doris Day) who lives in a small town.  After getting off the bus, Marsha witnesses the brutal and senseless killing of a man by the Ku Klux Klan; one of whom she soon learns turns out to be Hank Rice, her kid sister’s new husband.  Marsha soon finds herself in a dilemma as to whether help the local District Attorney, played by Ronald Reagan, by identifying Hank in court; wrecking her sister’s marriage in the process and endangering her own life or say nothing. The husband, portrayed by Steve Cochran, is a lowlife without much of a brain in his simple head. At the time the film was made, Marlon Brando’s performance as Stanley Kowalski was influencing just about every actor in Hollywood, and you can see shades of Stanley in Cochran’s portrayal of Hank even to the point where in one scene he attempts to assault his sister in law sexually. The real acting highlight though is Ginger Rogers whose portrayal of the sophisticated Marsha drives the film. Ronald Reagan, who I always considered a lightweight actor, actually fits his part as the crusading D.A. Burt Rainey and does fairly well. The same year this film was released came Reagan’s cheesy and tacky Bedtime for Bonzo. Doris Day as Lucy, in her first non-musical role holds her own, blindly ignoring her husband’s Neanderthal behavior. Cochran’s Hank is a sleazy character filled with hate and ignorance. One has to wonder what Lucy saw in this guy. Lucy comes across as an innocent in all ways, and Hank is just animalistic, perhaps seducing the naive and innocent younger sister into the dead end marriage.

The film’s finale is still potent. As the trial ends, Marsha is kidnapped and taken to a private area where the KKK hold their rallies. Once there, Marsha is condemned and flogged. She is saved from a worst whipping thanks to the arrival of Reagan’s D.A. along with police backup. Reagan’s big moment in the film comes as he denounces the hooded outlaws telling them he knows who they are despite their hoods and robes, and demands answers. The Imperial Wizard sacrifices Hank naming him as the murderer. In a desperate act, Hank grabs a sidearm from a fellow Klansman and panicking he shoots wildly, accidently hitting Lucy. The other Klan members panic and run off into the night.

While director Stuart Heisler does a fine job with the dramatics and visuals, the watering down of the screenplay does make the film come across as less than this kind of tale demanded. It lacks the substance a subject this volatile should command. Knowing that Richard Brooks (Brute Force, The Blackboard Jungle) was one of the screenwriters make this even more troubling considering his strong social conscience in other films. That said, as diluted as Storm Warning is, the filmmakers could not suck out all of the strength in the story. Yes, it comes across at times like a standard, ‘we’re not going to tolerate this kind of behavior any longer’ however, it’s still impressive enough to be given a watch.