One of neo-noirs most underrated and little talked about films is George Armitage’s Miami Blues. The 1990 film is based on Charles Willeford’s 1986 novel, the first in his series featuring the dysfunctional detective, Hoke Moseley. Willeford was a prolific writer, and not just of crime fiction. He was a poet and biographer. His crime novels are darkly humorous tales juxtaposing violence and humor keeping you off balance all the way.  Three of his novels have been turned into films: The Woman Chaser, Cockfighter and Miami Blues. All are unconventional, dark and eccentric which may account for why his work has not been mined for further screen adventures. 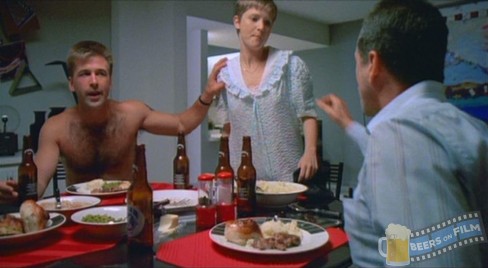 Fortunately, Director Armitage, who also adapted the screenplay, is in-synch with the author’s eccentric style. He did not indulge or take the typical safe Hollywood conventional route by watering the material down in an attempt to make it more palpable to the masses. Instead, we get, unique, fresh characters who are as entertaining as they are sometimes uncomfortable to be around.

Frederick J. Frenger Jr. aka Junior (Alec Baldwin) is a psychopathic ex-con. Just released from San Quentin prison, Frenger, flies cross country to Miami where he is supposed to start a new life. However, he is a habitual lowlife and quickly becomes a one-man crime wave. At the airport, Frenger is approached by a Hare Krishna who won’t leave him alone. Annoyed, he bends backward one of the Krishna’s finger’s breaking it, leaving him on the airport floor in agony. The victim soon goes into shock and dies. When Hoyt Moseley (Fred Ward) and his partner arrive at the scene, they discover the victim is dead. Dying from a broken finger? The cops look at each other and laugh.

Frenger meanwhile checks in at a hotel after having stolen some baggage and money. He immediately asks the bellboy, Pablo (Jose Perez) if he can hook him up with a female companion. Hey, he hasn’t been with a woman in years. She arrives in the form of a young and naive college student who works as a hooker on the side. Her name is Susie (Jennifer Jason Leigh), and they become involved, soon setting up a household living together. While Susie attends a community college, Frenger begins a community wide crime spree;  Susie remaining completely unaware of his activity.

As the police investigate the Hara Krishna’s murder, they become aware of Frenger, and Hoke, a cantankerous false teeth wearing detective, comes paying a visit. Susie naively asked the detective to have dinner with them. Alluding to Frenger’s criminal record, and eventually, subtlety suggesting he come down to the police station and be part of a lineup, Frenger realizes the cop may be on to him.  Later, being a preemptive kind of guy, Frenger breaks into the Hoke’s dumpy apartment and severely up beats him up, taking his gun, badge, and his dentures!  The career criminal now goes on a spree of crimes posing as a police officer. He breaks up robberies, only to steal the money himself! All this while Hoke is in the hospital recuperating.

As Hoke recovers, Frenger’s luck begins to head southward. At a grocery store, he attempts to talk a small time thief from robbing the place and out of a life of crime. Not in any mood to be reformed, the criminal runs Frenger down with his truck. Frenger comes to believe, being “honest” is not for him. In one final attempt at a scam he tries to sell coins, he stole, to a pawn shop. The female owner, Shirley Stoler (The Honeymoon Killers, Klute) suspicious at what he is up too, chops off three of his fingers. Outside, the pawnshop, Hoke, now back on the job, has been following Susie (she innocently drove Frenger to the store not knowing about his real plan) is waiting. Frenger’s come out, and a final shootout begins.

1990 was Alec Baldwin’s breakout year. A month before the release of this film, he portrayed Jack Ryan in The Hunt for Red October, and would also appear in Woody Allen’s Alice. These three films combined with recent supporting roles in Great Balls of Fire, Talk Radio, Working Girl and Married to the Mob would solidify his staying power. It’s worth mentioning that Jonathan Demme who directed Married to the Mob was the producer of Miami Blues. The film has a great soundtrack that includes, Pete Townsend’s Let My Love Open the Door, Jimmy Reed’s Big Boss Man, David Bowie’s Under Pressure and The Clash’s Armagideon Time.

Miami Blues is pure Florida noir. The heat makes tempers boil and the craziness rise to the top.