One Hour Photo is a sobering introspective look on why we are a world addicted to taking pictures. Today even more than ever we have this passion, desire, this need to record almost everything we do with a photograph. Many of us photograph as a sort of visual diary of family, friends, place we have been. For some of us, we take pictures to capture a fleeting moment that will never happen again. It could be a person’s expression or clouds patterns or waves crashing; they only happen once, and the camera catches it forever. For others taking photographs is a validation of sorts that yes we live, we exist. For Seymour “Sy” Parrish (Robin Williams) though, photographs are an escape from his painful past and an imaginary lifeline to a normal life.

The Yorkin family, Nina (Connie Neilson) and Will (Michael Vartan), take a lot of pictures; family stuff with their young boy Jake (Dylan Smith). Nina drops her rolls of film off at Savemart where Sy Parrish works at the photo concession stand where he has been developing film and printing photos for twenty years. Sy is a lonely man who lives his life through the photographs he prints for his customers, particularly the Yorkin family who he sees as the perfect family. Nina is pretty and has a friendly outgoing personality. Will is a clean cut regular guy. Jake is just as cute as can be. They are a picture-perfect family, ideal for the cover of Family Circle magazine. They are Sy’s favorite customers.

Sy has been processing the Yorkin’s film since young Jake was born, Every time, Nina comes in with a new roll or two of film, Sy makes an extra print of their photos for himself which we later learn he tapes to a wall in his dingy apartment located in a poor section of town. Sy’s has hundreds of Yorkin family pictures covering the entire wall.

Some days, Sy parks his car across the street from the Yorkin home. He watches them living out their lives, and yes taking an occasional photograph for his collection. With no family of his own, nor any friends, Sy vicariously imagines himself as part of the Yorkin family with young Jake calling him Uncle Sy. 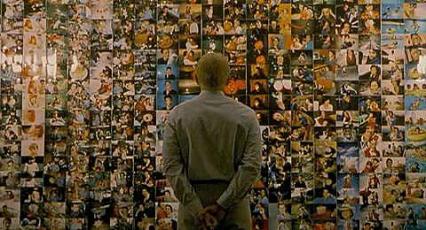 Sy’s world eventually begins to fall apart. It starts when his boss Bill Owens (Gary Cole) begins to suspect his longtime perfect employee may not be as perfect as he thinks. Long lunches, an argument with the photo machine repairman, and after reviewing his inventory report, Owens notices stock in the photo paper does not match the number of sales. Additionally, on Sy’s imaginary family home front, our troubled anti-hero notices Will may not be the perfect husband he assumed. Will is never at his son’s soccer practices and is emotionally cold toward Nina. These two ticking bombs in Sy’s life ignite when pretty Myra Burson (Erin Daniels), another customer, drops off a roll of film to be developed and Sy discovers while printing them they are mostly photos of Myra romantically kissing a man – Will Yorkin. Upset by this family betrayal, Will slips the revealing photos in with Nina’s next pick up of pictures. The second blow comes when Owens fires Sy from his longtime job. Any sense of emotional security holding Sy in check has disappeared. He is about to spiral out of control and into a dangerous and disturbing descent. 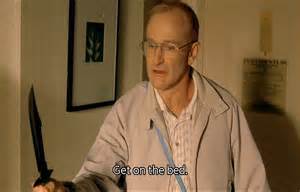 One Hour Photo works thanks to Mark Romanek’s excellent script and superb subtle direction, and thanks to Robin Williams who delivers one of the creepiest performances imaginable. To say Sy is just another lonely guy living a fantasy life through the images he meticulously develops and prints with care is not enough. One Hour Photo is a character study of a man who’s been barely holding on or trying to hold on to his sanity by living a fantasy life via, to all intents and purposes, a seemingly typical young All American family.

Watching the film, the question I kept asking myself is what happened to Sy in his life that led him down this disturbing path? What turmoil, anguish and hurt, has been held in check, behind his fragile façade of calm. What happened that once broken, (his firing and Will’s cheating,) makes all that hurt and anger building up inside comes exploding out. Sy is the sort of guy you pass by on the street and never notice. He’s bland, nondescript; a nonentity left alone with his inner pain buried deep, that is until he explodes. We eventually do learn the reasons for Sy’s fantasy life; the denial of the perfect family life he always craved and desired.

Robin Williams gives what may be his most masterful and controlled performance. As Sy, he’s a bland, overweight, repressed middle-aged bachelor living a solitary life. His apartment is minimally furnished, he eats alone;  his only contact with people is via his job developing film. He lives a make believe life through the photographs of other people.

One Hour Photo was made at a time just before cellphone photography became as common as eating popcorn at a movie. Early cellphones with photographic capability were in their infancy and photographically of mediocre quality. Most people were still using cameras and printing their photos, good and bad. It was the only way you could see what you had. Today, with the newest smartphones like iphone8 and iphone8 plus, photo quality is in many cases close to or on par with some DSLR’s. People take tons of pictures, more than ever. They are kept on the phone or up in the cloud, others are shared via social media platforms, blogs or websites. Only a few are printed for family albums or to hang on a wall in the home. Most likely, Sy Parrish would have been out of a job.