Photography was in its infancy when Abraham Lincoln was running for President. It was a cumbersome and deliberate process. Cameras were these large boxes, set upon sturdy bulky tripods, using wet plates and a slow exposure making the possibilities of the sort of images captured limited.

Mathew Brady was one best-known photographers’ at the time. In 1850 ten years before Lincoln became President, Brady published his first book, The Gallery of Illustrious Americans that included photographs he took of famous Americans like Edgar Allan Poe and Henry Clay. So when the Republican Party wanted someone to do a formal portrait of Lincoln, they went to his New York studio where Brady photographed the candidate and soon to be President for the first time. It was in February of 1860. Two years earlier, Brady opened up a gallery in His subjects included Dolly Madison, James Fennimore Cooper, Ulysses S. Grant, Robert E. Lee, George Custer, Edwin Booth and his brother John Wilkes Booth.

Scottish born photographer Alexander Gardner migrated permanently to the United States in 1856.(1) In New York, he made contact with the already well-known Mathew Brady and soon began working for him. By 1858, with Brady’s eyesight starting to fail, he put Gardner in charge of his Washington D.C. gallery. Gardner became a well-known photographer himself in the Capitol. After the war broke out, Brady, through his various contacts, requested to President Lincoln he be allowed to document the war photographically. Using his own money, Brady created a traveling darkroom personally photographing some of the grizzliest battles up to that point in time. He even came under fire at the First Battle of Bull Run, Fredericksburg and Petersburg. However, Brady’s eyesight was not good, and it limited his time behind the camera. Along with Gardner, Brady hired Timothy O’Sullivan, Thomas Roche, James Gardner and more than twenty others, providing each man with their own traveling darkroom to go out and photograph the war.

In 1962, Gardner quit working for Brady. The problem was Brady did not keep good records of which photographer shot what photographs and subsequently took credit for much more than his share of pictures. When exhibited, they were all signed Photographed by Brady. It’s also possible Brady did this purposely taking credit where it was not due. There’s no proof what his thinking or motives were. While there are specific photographs known to be made by individual photographers, there are thousands of images with no record as to which photo belongs to what photographer.

While I have not been able to find a non-documentary film that has Mathew Brady as a character, Alexander Gardner appeared in three movies. Not surprisingly they are all Lincoln related. His appearances are minor, but from a photographic point of view, there are a few interesting things to point out. 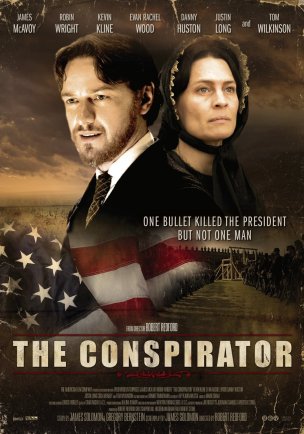 Gardner first appeared in Robert Redford’s The Conspirator (2010), the story of Mary Surratt the only female charged in the assassination of Abraham Lincoln. It’s the best of the three films Alexander Gardner appears in as a character. Portrayed by John Bankson, it is also the smallest and least significant role of the three films. We see him in only two quick shots during the scene where the four conspirators sentenced to hang, await their fate on the gallows. Gardner was the only photographer permitted to photograph the execution.

In 2013, Alexander Gardner appeared in two films, Saving Lincoln and the made for TV film Killing Lincoln; the latter based on Bill O’Reilly’s bestselling book. In Killing Lincoln, a National Geographic docudrama, Gardner is portrayed by Greg Cooper. Like the real-life photographer, Gardner is on the heavy side and bearded. It’s the closest physical resemblance of all three films. The movie, like the book, offers no significant revelations about the assassination. Narrated by an appropriately solemn Tom Hanks, we get to see Gardner in three scenes; the first when President Lincoln meets with General George McClellan just after the Union victory at Antietam. The battle was the bloodiest fought on American soil costing more than 22,000 lives. Lincoln and McClellan are more than just talking they are arguing over the failure of McClellan in not pursuing Confederate General Lee’s army after the Union victory. In the middle of their argument, Gardner interrupts the two men requesting they and others remain still and pose while he takes a photograph. While the men remain still,  Gardner counts to ten and then allows the two men to continue. The scene provides you with an idea of how slow the collodion wet plate photographic process was at the time. A short time later, Lincoln relieved McClellan of his command. Later on, we see Gardner doing a formal portrait, the President’s last, again doing the ten count. While waiting for Gardner to develop the plate, the President views some of the earliest battle scene photographs of dead soldiers lying dead on the battlefield, through a stereoscopic viewer. The photos are presumably Gardner’s. 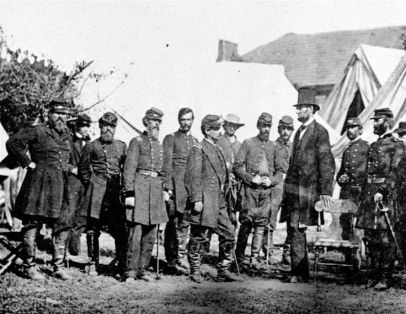 Alexander Gardner photograph of Lincoln and Gen. George McClellan after the Union Victory at Antietam.

The photographer’s next appearance is near the end of the film when we see him photographing five of the co-conspirators, Lewis Powell, George Atzerolt, David Herold, Michael O’Laughlen and Samuel Arnold aboard the U.S.S. Saugus docked at the Washington Navy Yard. Sime days later, Gardner photographs, at the request of Secretary of War Stanton, the corpse of John Wilkes Booth. The glass plate photo was developed, most likely by Gardner’s assistant Timothy O’Sullivan. One photograph was made from the one plate and given to James A. Wardell, a government detective assigned to stay with the photographers. After Wardell received the plate and the print he gave both to Colonel Layfette Baker. From that point on it becomes a mystery what happened to them both. The plate and print disappeared and never seen since. On July 7th, Gardner and O’Sullivan were given sole access to the military tribunal where they will photograph the hanging of Lewis Powell, George Atzerodt, David Herold and Mary Surratt, the four conspirators sentenced to hang. 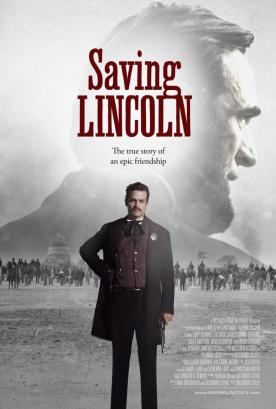 That same year, Alexander Gardner, portrayed by Nick George, appears in Saving Lincoln a small film about the friendship between the President and his bodyguard, U.S Marshall Ward Hill Lamon, a man who was by his side all the time except for the fateful day of the assassination. The film is terrible. It is like watching a highlights reel as it jumps from one moment to another with little attempt at depth into its characters. It is best, and the only reason to watch it, when the filmmakers’ blend, via the green screen process, the actors directly into archival Civil War photographs made by Gardner, Matthew Brady, Timothy O’Sullivan and others from the Library of Congress.

Of the three films, Killing Lincoln gives us not only the most substantial role on screen for the photographer, but it also provides an interesting look at what it was like to have been a war photographer in those early days of photography. There is also a one-hour documentary made for the History Channel’s Civil War Journal called Alexander Gardner: War Photographer which I have not seen.

The thousands of photographs made by Mathew Brady, Alexander Gardner, Timothy O’Sullivan and the other photographers employed by Brady are the essential visual documentation we have of the Civil War and of that era in general. If you have seen a photograph of the Civil War, it is most likely by one of the photographers in the Brady Collection.

One comment on “From Real to Reel: Real Life Photographers in the Movies – Alexander Gardner”