When I lived in New York City, I rode the subway from Brooklyn to Manhattan every workday. The ride from where I lived to 23rd street in Manhattan took about forty-five minutes to an hour each way. It was perfect reading time. There was nothing else to do but stare at other passengers and that could only get you in trouble. I cannot count the number of books I read during that daily trek. One of them was John Godey’s bestselling urban thriller, The Taking of Pelham One, Two, Three.   Both the book and the 1974 film exploit the always present fears New Yorkers internally experience when they find themselves caught in enclosed spaces and escape is out of your hands. 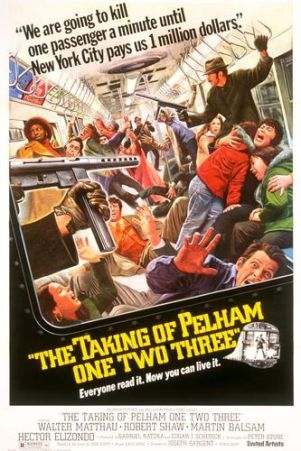 Directed by Joseph Sargent from a dark and witty screenplay by Peter Stone (Mirage, Skin Game, Arabesque) the 1974 film, and the book’s concept, the hijacking of a subway train seems ridiculous. You can hijack a plane or a bus, but a subway? However, the four hijackers have a plan that as its slowly revealed seems conceivable.

On what is a typical day in New York City, the IRT Pelham Bay line is making its way toward downtown Manhattan when three men board the subway train at different stations. At the 28th street station, a fourth man approaches the motorman, points a gun through the window ordering him to unlock the door to his cab and let the man standing outside his door enter. Meanwhile, one of the other men is now pointing a gun at the conductor ordering him to hold the doors open until the man talking to the motorman gets on board. Once all are aboard, they allow the motorman to move the train out of the station stopping it between stations. Meanwhile, Lt. Zack Garber, a droll Walter Matthau, of the New York Transit Authority police is conducting a tour of the command center, showing four executives from the Japanese Transit Authority the massive layout of the subway system. His day will soon go from mundane to way out of the ordinary.

The film is one of the most economical action-oriented films ever made. There is no time wasted on introducing the characters. From the very opening scene, we the audience are integrated into the heist. The characters develop as the story progresses; no sub-stories or romantic interludes, no unnecessary explosions or violent close-ups of people being shot and no resorting to special effects as so many films do today. Director Sargent leans on the story, acting and good solid film making, he shoots the story straight as an arrow.

The hijackers are led by Robert Shaw as Bernard Ryder, aka Mr. Blue the cold, unemotional former British mercenary. Mr. Blue’s fellow hijackers include Martin Balsam as Harold Longman, aka Mr. Green, a former disgruntled subway employee, and crucial member with the inside knowledge to operate the train. Hector Elizondo is Giuseppe Benvenuto, aka Mr. Grey, the trigger-happy gunman who “can’t wait to get on the scoreboard.” and Earl Hindman as George Steever aka Mr. Brown.   In addition to the hijackers, Matthau’s transit cop has to deal with a hot-headed dispatcher (Dick O’Neill)  whose priority is to keep the rest of the subway system moving and be damned if any of the hostages get killed (“Screw the passengers, what do they expect for 35 cent, to live forever!“). The cast also includes Jerry Stiller as police Lt, Rico Patrone, James Broderick as the train’s unlucky conductor, Tony Roberts as the Mayor’s aide and a young Doris Roberts as the Mayor’s wife.

The Mayor, portrayed by Lee Wallace is an ineffective, cowardly politician who comes across as a combination of former Mayors Abe Beam and John Lindsay though author Godey never stated whom the character was based on. In 1974, the city was in bad shape and John Lindsay who was in the final months of his administration when the film was made insisted that the filmmakers use graffiti free train cars so the image of New York would not look too bad.

The Taking of Pelham One, Two Three is one of the great New York City films. Shot on location, it captures the feel, the grime, the dress, the speech, the attitude of 1970’s New York. Sharp observers will recognize the famed Belmore cafeteria on Park Avenue South from Martin Scorsese’s Taxi Driver. It was the cabbie hangout where Travis (Robert DeNiro) meets fellow driver Wizard (Peter Boyle). The Belmore, now long gone, was a real-life hangout of NYC cabbies. In this film, it is seemed in some background shots.

The cinematography by Owen Roizman captures the gritty look of the subway system and the city in brilliant detail. Jerry Greenberg’s sharp editing keeps the pace of the film moving at a quick speed. Greenberg’s other works include The French Connection, Apocalypse Now, Dressed to Kill and Scarface Finally, there’s David Shire’s exciting 12 tone funk/jazz style score which jump kicks the film right from the beginning. Shire was on a roll at this period producing some of his best work in films with works like Farewell, My Lovely, The Conversation and All the President’s Men.

The 2009 remake[1] with Denzel Washington, restored the part of Lt. Garber to an African-American as it was in the novel,[2] and John Travolta as the lead hijacker had a lot to live up to. It’s a decent film, but not on the same level as the original.

[1] A 1998 made for TV movie starred Edward James Olmos, Donnie Wahlberg, and Vincent D’Onofrio. Unlike the original, it was shot in Toronto.

[2]  The role of Lt. Garber was initially written in the novel with a thirty-two-year-old African-American in mind.  Walter Matthau read the script, liked it and told United Artists he wanted to do it. After Matthau signed on, the script was changed to accommodate the star.