In the opening scenes of Seven Days in May we find picketers from both sides demonstrating outside the White House. Tempers are high. A riot breaks out, and the police come in attempting to break up what has turned into a free for all. Those divisive times were more than fifty years ago. It’s amazing how times have not changed. Today it is no different, tolerance and respect are in short supply. For many of us, emotions are driven by fear. We live in a period where Americans fear foreigners, terrorists, North Korea, Iran, Nuclear war and more. Fear drives irrational behavior. 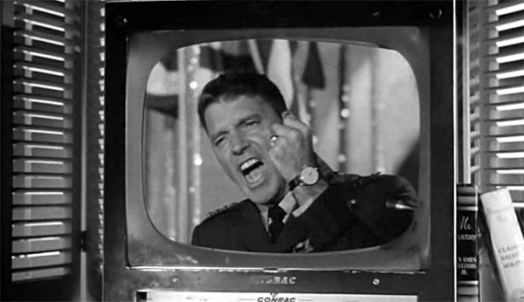 Based on the book written by Fletcher Knebel and Charles W. Bailey, and published during the Kennedy administration, the roots of Seven Days in May go back to the late 1950’s and one Major General Edwin Walker. Walker was a staunch anti-communist with strong political views which he had no problem sharing with those under his command. He labeled former President Truman, former First Lady Eleanor Roosevelt and others including then-current President Eisenhower communists. He protested to President Eisenhower about sending Federal troops to Little Rock, Arkansas to assist with the integration of schools. Walker was a follower of Rev. Billy James Hargis who believed the Civil Rights Movement was a communist plot. Walker was also an acquaintance of Robert Welsh, a co-founder of the John Birch Society. Walker submitted a resignation letter to Eisenhower which the President refused to accept. After the election of J.F.K., Walker once again sent a letter of resignation. Kennedy accepted it. Walker was out, though his ties to Kennedy did not end there.  The novel’s authors used Walker as a major inspiration for the character of U.S. Air Force General and Chairman of the Joint Chief of Staff, James Matton Scott, portrayed by Burt Lancaster in the film.

Kirk Douglas purchased the film rights to the book and in spite of Pentagon objections received the blessings of then President Kennedy to make the film. Burt Lancaster agreed to play Scott, and John Frankenheimer to direct, this despite his misgivings of working with Lancaster again after having problems during the making of Birdman of Alcatraz. 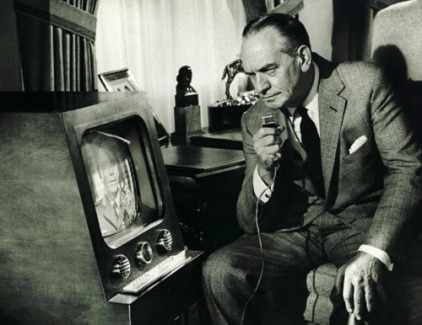 President Jordan Lyman (Frederick March) recently signed a nuclear disarmament treaty with the Soviet Union going against the advice and recommendations of his military advisors. Scott is especially perturbed and considers the President’s move, an act of treason. The American public has reacted by giving Lyman a twenty-nine percent approval rating. Colonel “Jiggs” Casey (Kirk Douglas), Scott’s aide, comes across some strange inexplicable information: various cryptic data sent between Joint Chief staff members, a secret military base located in a barren area of Texas. Suspicious, “Jiggs” begins to suspect that Scott and a group of other senior military are planning a coup. The military takeover is scheduled for the following Sunday when the President will be isolated during a military practice alert. Though he has no definitive proof, “Jiggs” goes to the President who gathers a group of trusted advisers to investigate the claims. The President sends faithful Georgia Senator Raymond Clark (Edmond O’Brien) to Texas to investigate the secret military base. He finds it and ends up held in confinement. Presidential aide Paul Girard (Martin Balsam) is sent to the Mediterranean to “talk,” basically draw out a written confession from Vice Admiral Barnswell (John Houseman).  Girard gets it, but on his way home is killed in a plane crash over Spain. The confession, tucked in a cigarette case, a gift from the President, lies in the wreckage. Additionally, “Jiggs” obtains some discriminating letters from Scott’s former lover, Eleanor Holbrook (Ava Gardner) to use against Scott. The President does not want to use the letters, we’re never told what they contain, though he is encouraged by his staff to use them because Scott must be stopped by any means necessary. When the President confronts Scott, the General denies it all. He is convinced the public is behind him and not a weak President. Leyman is about to confront Scott with the letters, but at the last minute stops himself. Later, after a meeting with the other Joint Chiefs, Scott tells them of his meeting with the President, and that he has no solid evidence. They need to stay united and move on with their plan on Sunday. However, before the plot is put in motion, the President holds a press conference demanding the resignation of Scott and the other Chiefs of Staff. During the press conference, the President is informed that Girard’s cigarette case was found and contained Barnwell’s handwritten admission of the plot. He orders copies be made and sent to Scott and the others. The coup is over. The President addresses the nation saying, “There’s been abroad in this land in recent months a whisper that we have somehow lost our greatness, that we do not have the strength to win without war the struggles for liberty throughout the world. This is slander because our country is strong, strong enough to be a peacemaker. It is proud, proud enough to be patient. The whisperers and the detractors, the violent men, are wrong. We will remain strong and proud, peaceful and patient, and we will see a day when on this earth all men will walk out of the long tunnels of tyranny into the bright sunshine of freedom.” 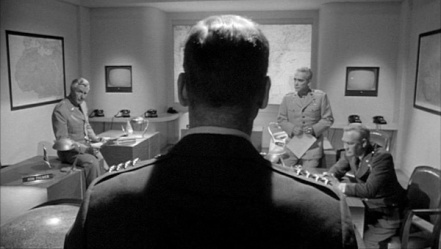 Though made a half a century ago, Lyman’s film ending speech remains thought provoking and  a powerful indictment on those who believe the only road to peace is through bigger and bigger bombs. War is the answer. As Lyman says, “our country is strong, strong enough to be a peacemaker.”

Seven Days in May was a perfect companion piece to director John Frankenheimer’s previous paranoid/political film,  The Manchurian Candidate. In both cases, Frankenheimer remains faithful to the respective sources. Frankenheimer’s sharp direction is nicely complemented by Ellsworth Fredericks low-key, almost noir-like cinematography, and Jerry Goldsmith’s menacing score magnificently assists in setting the mood. The entire cast is impressive: Burt Lancaster is like a tightly wound clock, and far more evil than had he been his loud, typical over-acting self; Kirk Douglas had the tough role of blowing the whistle on his boss, a man he admired; Frederic March makes for an admirable President who has lost the confidence of the American public, but must stick to the principals he believes are right, and Edmond O’Brien gives a typically steady performance as the boozy Senator from Georgia. If there is a weak spot in the film, it is in the scenes with Ava Gardner. Not her performance, but the entire subplot about the letters. If the letters were romantic, that in itself, even back in the 60’s, would not be enough to turn the public against Scott, at least I doubt it. Others in the cast include Andrew Duggan, George Macready, Whit Bissell, Hugh Marlowe, and Richard Anderson.

President John F. Kennedy read the novel and found it credible enough to believe it could happen here. Assassinated in November 1963, Kennedy never did get to see the film. Still, there is one more connection between J.F.K. and Seven Days in May.  On April 10th, 1963, retired General Edwin Walker whom Lancaster’s character was inspired by, was in his home sitting at a desk when a bullet came through his window, fragments from the shattered window wounding Walker. While there is no definitive proof the shooter was Lee Harvey Oswald, he was known to hate Walker considering him a fascist. Oswald’s wife Marina later testified after the Kennedy assassination that her husband told her he was going to shoot Walker. However, by the time the FBI found out about this connection Lee Harvey Oswald was shot and killed by Jack Ruby.