As a kid, some of my favorite TV shows included The Honeymooner’s, The Abbott and Costello. Show and The Little Rascals. The Rascals were on in the afternoon, and I was religious in watching them unless my mother forced me to do my homework which she always did. I would tell her, “the show’s almost over!” That was always my official reply even if the show just began.

The Rascal’s series began life as Hal Roach’s Our Gang back in 1922. Roach eventually sold the Our Gang series to MGM who continued to produced the series of shorts. In 1955, MGM sold the TV rights however, they had to change the name to The Little Rascals since MGM continued to hold the right to the Our Gang trademark.

The series of shorts began to hit its peak with the advent of sound in the late 20’s/early 30’s. As the first wave of kids (Joe Cobb, Chubby, Farina and others) became too big, they were replaced by other kids. In 1934, Carl Switzer and his older brother Harold with their family were on vacation in California. One of their stops was the Hal Roach studio. They stopped to eat at the Our Gang commissary while touring the studio. The two kids began fooling around as kids do. Hal Roach happened to be eating there at the same time and was impressed. Very impressed. He signed both boys up baptizing Carl, as Alfalfa and Harold as Slim. Their first film was Beginner’s Luck.

Alfalfa quickly became one of the most popular members of the Rascals. Instantly identifiable with his face full of freckles, large expressive eyes as well as his dress; clothes that were always a size or two too small. Then there was his greasy slicked down hair, and the most impressive cowlick in the history of cinema. Finally, there was his voice, a squeaky and Southern rural combination you cannot forget. His voice was no threat to recording artists of the day yet his versions of I’m in the Mood for Love, I’m Through with Love, and I’m the Barber of Seville are memorably etched in the mind of all fanatical Rascals fans. Other than Spanky McFarland, Alfalfa was The Little Rascals biggest star.

Like most child stars, Carl post-Little Rascals career was a struggle though he fared better than most child stars. One of his earliest non-Rascal roles was a small part in the Bob Hope comedy, My Favorite Blonde. Other films, always small or bit parts included Rosie the Riveter, Going My Way, Pat and Mike, State of the Union, Cause for Alarm, Track of the Cat, Motorcycle Gang, and The Ten Commandments, among others. His last film was The Defiant Ones. He also had a few TV roles, most notably on The Roy Rogers Show. He reprised his role as Alfalfa in two of three Gas House Kids films his appeared in (Gas House Kids in Hollywood and Gas House Kids Go West). 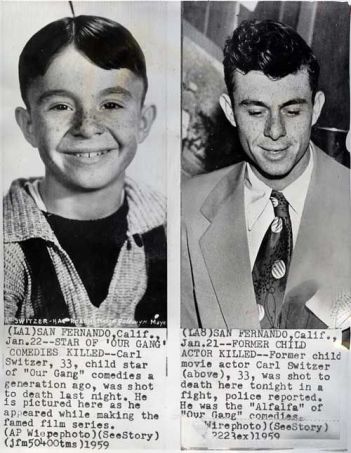 All of these post Rascals roles did not generate much money. Carl needed to supplement his income by training and breeding hunting dogs. Among his clients were Roy Rogers and James Stewart. The decision to train and breed dogs would unknowingly turn out to lead to his death. Carl was shot, in the groin, by Moses Samuel Stiltz, one of his clients. An argument ensued over a $50 payment. The shooting was considered self-defense at the time but has been questioned since. Carl Switzer was 31 years old.

17 comments on “The One and Only Alfalfa”