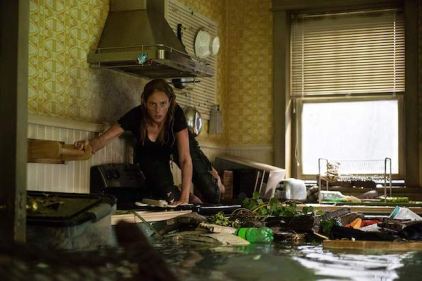 I live in Florida and every year for six months starting on June 1st and going through November 30th we are inundated us with hurricane preparation news and fears by our local weather gurus. They beg us to prepare, know your evacuation routes, have plenty of water, food and be sure important papers are wrapped in plastic bags, all just in case. While tracking hurricane paths has improved tremendously Mother Nature has a way of doing its own thing. Preparation is important, but six months of it is emotionally draining. We’re now in November and the season is almost officially over. By November you can start breathing a sigh of relief for six months before it all starts again. This hurricane season Cat. 5 Dorian devastated the Bahamas and just last season Hurricane Michael massacred the Florida Panhandle. The point is, hurricanes are not to be taken lightly.

This brings me to Crawl, deftly directed by Alexandre Aja. If you’re looking for realism, you have come to the wrong place, but if you looking for an entertaining, cheesy, old-style monsters gone wild flick, Crawl is a perfect way to kill 90 minutes.

Against all rationality, University of Florida student (the Gators) and top-notch team swimmer Haley, insists on driving straight toward the heart and soul of a killer Cat. 5 hurricane to her hometown to check on her father, Dave, who no one can contact. She arrives in town and slips past the sheriff deputies who are ordering everyone to evacuate and arrives at her father’s dilapidated house that is already beginning to take in water. She finds her Dad hurt and trapped in the home’s huge, and I mean huge crawl space. As you are already thinking, they are not alone. Oversized alligators have come to visit and are holding them hostage.  Can they escape? Will they be eaten alive?

For those who will criticize the film’s credibility, there is plenty to scream about: helicopters flying during a hurricane, Both Haley and Dave are bitten severely twice by the gators and not only survive but kick ass! Then there’s the scene where both father and daughter are convinced UF Gator star swimmer, Haley, can swim faster than the killer gators and reach a boat that would help them escape.

Director Alexandre Aja provides some great Jaws like tense moments that will make you jump in your seat. This is no work of art but it’s a terrific fun film if you don’t let the facts get in your way, and the use of Bill Haley’s and the Comet’s See You Later, Alligator during the closing credits reflects the filmmakers are not taking the film or themselves seriously.

My thanks to Pam at All Things Thriller whose previous review gave me the inspiration to take a look at Crawl.

4 comments on “Crawl: Gators and a Hurricane Are a Wild Combination”