This is my contribution to CMBA’s CLASSICS FOR COMFORT BLOGATHON.

A few years back, I wrote a post entitled Celluloid Comfort Food. My opening paragraph read like this, there is a certain reassurance in watching your favorite films over and over again. The act of repeated watching is like getting together with an old friend you haven’t seen in a long time. You talk about the same old stories; you laugh or maybe even cry about those bygone glory days. Similarly, when watching a favorite movie, you know where the jokes are. You can expect those laughs long before they come on screen. If it’s an old gangster film, you know you have to watch just one more time as James Cagney takes that long last walk toward the electric chair. Either way, there is a level of contentment that flows in you with the familiarity of repeatedly watching a favorite film. You forget about the world outside, the troubles inside your head, for two hours, and relax with pure celluloid comfort food.

I wrote about five films that I found comfort in watching: Being There, Stagecoach, Buck Privates, Adam’s Rib, and My Favorite Brunette. During these days of “stay home, stay safe” I have had to look further into my cinematic archives and discovered I have many, many other films that I can find comfort in and shelter me from this ongoing pandemic storm.

My days today are different to an extent due to the pandemic. My photography has definitely decreased, and going out to a restaurant or anywhere, except for food has ceased, but my writing and movie watching has increased. Here’s a typical day: watch and read the morning news, review emails, and social media. From there I work on my writing. My wife and I go out for a daily walk in our neighborhood, keeping socially distant if we run into neighbors. In the afternoon, I watch a movie and/or read, sometimes both. The next day is the same as before, but different.

So what movies have I been watching? So far, nothing that I have not seen at least once before. After all, I am looking for comfort, and there is comfort in the familiar. It doesn’t matter what the genre as long as there is a sense of “yeah, I know I’ll enjoy watching this again.”

Coming up with a list of only five was the hard part. When I first began working on this, my list of titles kept changing. I was getting nowhere. I knew Hitchcock had to be in the final five. But what else? I wrote the names of about twenty films on paper and slowly with much tribulation crossed out all but five.

As I looked at the five remaining films I realized these are movies, I’ve watched so many times and enjoyed them more and more with each viewing. There were others, but for today this is it. Narrowing my list down to five films was tough, but I did it. Come back tomorrow, and my list may be completely different.

Anyway, below is my list. Please stay safe, don’t take this virus lightly. Be careful for yourself and for others. 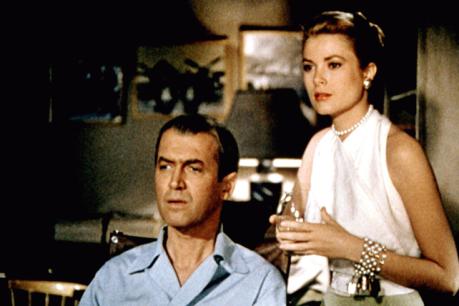 What can be more comforting than watching an Alfred Hitchcock classic? Rear Window is one of my all-time favorite films and my top Hitchcock film with Psycho, Strangers on a Train, North by Northwest, Dial M for Murder, The 39 Steps, and Vertigo not far behind. I’m sure I will watch these soon. Rear Window is a film with a lesson on why you shouldn’t spy on your neighbors. You never know what you may discover. James Stewart is L.B. Jeffries, a temporarily wheelchair-bound photojournalist for a LIFE type magazine. At first, he finds nothing out of the ordinary: a struggling musical, a lonely woman, a young dancer, a newlywed couple with high energy for sex (shades are drawn) and a salesman (Raymond Burr) who may have murdered his wife, chopped up her body to help easily dispose of her remains. You know, the standard stuff. With the help of his girlfriend, a stunning Grace Kelly, and his nurse a sassy scene-stealing Thelma Ritter, Jeffries seeks the truth. 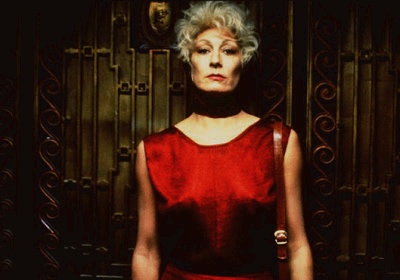 Anjelica Huston’s Lily Dillon with never win any “Mother of the Year” award but, in Stephen Frears The Grifters, based on Jim Thompson’s pulp fiction classic, she gives a superb performance as one of the nastiest Mom’s on screen. After a scam gone wrong, and her son Roy (John Cusack) gets beat up badly, she tells the ambulance medic “He’s gonna be all right ain’t he? If not, I’m going to kill you.” Yet, she has no problem stealing her son’s money at the same time. Ah, motherly love.

With a screenplay by novelist Donald Westlake, The Grifters is a great neo-noir. John Cusack as the son and Annette Bening round out a perfect cast.

A Slight Case of Murder

Back in 1977, author Donald Westlake published a book called Enough (recently re-released by HARD CASE CRIME under the title Double Feature). It consists of two novellas, the longer of the two called A Travesty, and the second, shorter story, Orb. At the time, Enough was one of the toughest of Westlake’s works to find a copy. I was fortunate enough back then to discover a copy at a local library. A Travesty is a dark, comic tale involving a sexually insatiable film critic, Corey Thorpe, who during a heated argument with one of his lovers accidentally kills her. Having seen too many movies, instead of calling the police, Thorpe decides to cover up his involvement in the transgression. Unfortunately, Thorpe’s lover was under surveillance by a blackmailing private investigator. Additionally, the investigating police detective takes a liking to our “hero,” and admires his amateur detective instincts. He’s also a frustrated screenwriter and would like Corey to look at what he wrote. Along the way, Carey is “forced” to commit a couple of more murders. Regrettably, for the film critic, his voracious appetite for sex does him in when he spurns the wrong woman.

Let’s fast forward over 30 years to 1999 and the premiere on TNT of a film called A Slight Case of Murder. Don’t confuse it with the 1938 Edward G Robinson film with the same title, but a made for TV film starring William H. Macy, Felicity Huffman, James Cromwell, and Adam Arkin. The film is based on A Travesty and adapted for the screen by Macy and director Steven Schachter. The duo faithfully captures the humorous essence of Westlake’s novella. The film critic’s name was changed in the movie from Corey to Terry, but much of the tale stays close to Westlake’s original work. It’s smart with plenty of visual and verbal nods to the noir films it’s sending up, including Terry talking at times directly to the camera (in place of a voice-over). It’s filled with murders, sleazy characters and plenty of twists wrapped up in a funny script that film lovers, like myself, will especially love.

The performances by the four principal actors are all of high quality, though William H. Macy gets a special nod in a role that some may find reminiscent of his Jerry Lundgaard role in Fargo. Also noteworthy is Julia Campbell’s work as Arkin’s amorous wife, whose affair with Macy leads to his downfall.

Manhattan Murder Mystery is one of my favorites and maybe is my all-time favorite Woody Allen film. Like many, I am a fan of The Thin Man movies and other amateur sleuth husband and wife type films that have appeared over the years. Think The Ex-Mrs. Bradford or There is Always a Woman or Mr. and Mrs. North. They’re light, entertaining and if you’re lucky, there is a good mystery and some laughs.

Manhattan Murder Mystery is a throwback to some extent of Allen’s earlier work, which make sense since the script was written by Woody and his former partner Marshall Brickman years ago and tossed in a draw only to be excavated after the trials, tribulations, and accusations of his former lover Mia Farrow. Mia was originally scheduled to play the part of Carol, but due to all the personal animosity, Allen wisely sought former lover and screen co-star Diane Keaton.  And Keaton is a marvel here, the driving force of the entire story. The duo look as comfortable working together as a pair of well-worn shoes.

A few years back, North Carolina had a sharp increase in “shark attacks” during the hot summer season. The local politicians, instead of doing the right thing, announced “The beaches will remain open.” It was the same way the local politicians and business owners in Spielberg’s classic film reacted. It’s the 4th of July weekend, one of the biggest moneymaking times of the year. Closing the beaches will ruin the local economy. Public safety, sure that’s needed, but hey, business first. North Carolina had already experienced seven shark attacks that year. Yet, it was business over public safety that won out. Sadly, the same thing is happening today with the pandemic. Somehow the pandemic has become a political issue. A business versus public health issue. Jaws was never meant to be a socially conscience film. It was never meant to be more than a fun, scary horror film, and that it remains.

I saw Jaws for the first time during that sweltering summer of 1976. The audience was hooked right from the beginning. Word spread quickly that it was the film to see. Like everyone else in the Brooklyn Theater that day, I was on the edge of my seat throughout. It changed the way films were distributed, arguably not for the better. I watch Jaws at least once a year, and as corny as it may sound, it’s usually on or around the Fourth of July weekend. It just seems appropriate.

You can check out the many other excellent contributors by clicking here.

12 comments on “Classics for Comfort Blogathon”