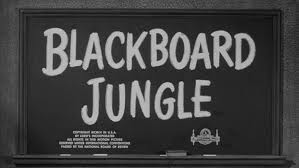 The pounding beat of Billy Haley’s Rock Around the Clock as the screen darkens got teens of the day up and dancing in the aisles. Theater owners in various cities throughout the country were nervous. Some theaters shut off the sound system during those opening credits fearing teens would quickly get out of control.  Censors, parents groups, religious groups and law enforcement all had their say in speaking out against the film. One censor in Memphis, called the film, “the vilest picture I have ever seen in twenty six years as a censor.” Rock Around the Clock was originally released in mid-1954 by Haley as a B-side to the song Thirteen Women (And the Only Man in Town). It was not until director Richard Brooks wanted the song for the film’s opening and closing credits that it rocked to the top of the charts selling more than two million copies. Rock Around the Clock was not the first rock and roll record, nor was it the first hit. It was the first to hit number one on the record charts. Its social impact was massive, helping pave the way for another southern boy, a sexy, better looking boy than the chubby, curly twirled haired Haley, to explode on to the national scene. Despite the film’s opening and closing credits filled with the early rock classic, most of the soundtrack is jazz. END_OF_DOCUMENT_TOKEN_TO_BE_REPLACED