Selecting a favorite film is not easy, at least for me. I am always jumping back between two or three films; Alfred Hitchcock’s Rear Window or two films by Billy Wilder, Double Indemnity and Some Like it Hot. These two directors were there almost from the beginning of my love affair with film. So when it came to choosing a favorite film for this blogathon or any reason it becomes one more time where I have to make a torturous choice. That’s because in a week, a day, a minute from now I will be doubting myself for not going with one of the others. I have written about Rear Window in two different articles and once about Some Like it Hot. Surprisingly, at least to myself, I have yet to write about Double Indemnity. From the title of this article you can easily surmise that I still haven’t. I decided to go with Wilder’s 1959 farce, a reposting of an article I wrote some time back, primarily because of what  you are about to read in the following paragraph. I was a young teen when I did what I discuss and have always felt a visceral connection to this film.  The humor, the writing, the pacing, Jack Lemmon and Marilyn. it all came together. Anyway, here is the original article. END_OF_DOCUMENT_TOKEN_TO_BE_REPLACED 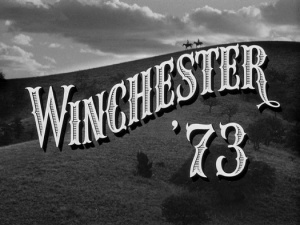 Was it his personal war experiences that changed James Stewart? Did he come back a changed manl; most men do.  Many of Stewart’s post World War II roles began to take on a darker side with haunted ambiguous characters motivated by revenge or other desires. Maybe a steady diet of Frank Capra’s Capra-corn did not have enough substance anymore, after all life was not that simple (Stewart’s darker side was touched upon slightly in “It’s a Wonderful Life” but he was soon back to his sweet genteel self).  “Winchester ’73” was the first Mann/Stewart collaboration, a joint effort that would produce some of the most mature westerns ever made. 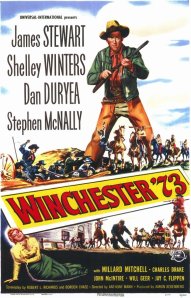 Fritz Lang was originally on board to make this film, however soon bowed out. After a screening of Devil’s Doorway Mann’s first western starring Robert Taylor, Stewart agreed to work with Mann.   The Winchester of the title was a special, “one of a thousand” type made in 1873. President Grant owned one, so did Buffalo Bill, and now Lin McAdams (Stewart), He wins one in a 4th of July celebration shoot out exhibition in Dodge City. His closest competitor is Dutch Henry Brown (Stephen McNally), his brother who shot their father in the back, though we do not find this out until toward the end of the film. For most of the story we never understand why Lin is so determined in going after Dutch.

The rifle itself gets passed around throughout the film becoming almost a character, or a link, in the film as it moves on from Lin, who won it in the shooting contest, to Dutch who steals it in a fight with Lin, to  an Indian gun runner, to an Indian Chief (Rock Hudson) to the cowardly fiancé (Charles Drake) of Lola (Shelley Winters) the only female in the cast, to gunfighter Waco Johnny Dean (Dan Duryea) then back to Dutch and finally back to Lin.

Just about every male character in the film drools over the perfect piece of equipment, an obvious symbol of virile masculinity. The men who possess it show it off, and the men who want it are envious. Guns in general are seen as phallic symbols. Later after successfully fending an attack by Indians, Lola returns to Lin a pistol he gave her to defend herself during the attack  with the understanding that the last bullet she should use on herself rather than fall into the hands of the Indians. Returning the gun and the bullet Lin suggest she may want to  keep the bullet. Without hesitation she says “I want it!” leaving no  uncertainty in her tone and look that she is talking more about sex and a life with Lin than just an old bullet.

Though the story is fiction, original screenwriter Robert L. Richards, later Mann brought in Borden Chase to do a rewrite in the first of their collaborative efforts, surrounds the story in real western mythology; Dodge City where an elderly though respected Wyatt Earp (Will Geer), Doc Holiday and company run a tight ship allowing no one to carry guns while in town. The Civil War has recently ended and General George Armstrong Custer was most recently overrun at Little Big Horn all of this invoking a strong sense of time and place in history.

This was the only western collaboration of Mann and Stewart filmed in black and white which may account for some of the noirish lighting in a few scenes, particularly in the fight between the two brothers in the hotel room where Dutch and his boys take the Winchester from Lin and beat it out of town.

As with “The Naked Spur” the theme of revenge is significant in this film as it motivates Lin in going after his brother. Family or the sense of family is also important here, the two brothers whose family was destroyed by the actions of one. Also between the prostitute Lola who is thrown out of town by Wyatt Earp, and the cowardly Steve. Both are outcasts who attempt to have a life together. Finally, and most prominently in Dodge City where an older Wyatt Earp is the friendly but strong willed patriarch (no guns allowed in town) who oversees the family friendly 4th of July celebration where the shooting contest is held with the winner getting the Winchester ’73.

This western is far from the type generally made at the time, more psychological, character driven with a conflicted dark hero. An excellent example occurs early in the film in Dodge City, after Lin surrenders his gun to Wyatt Earp, he enters a bar and finds his nemeses and brother at a card table. The reaction of both brothers to seeing each other is to crouch down and draw their guns. Thanks to Earp neither man has a weapon and a shooting is adverted but it is a disturbing scene as we watch the “hero” react in a way no better than the villain. Still, there is plenty of the standard action audiences would expect, Indian attack on the Calvary, cheating at cards, gunfights, Indian gun trader, a planned bank robbery and a woman in distress.

With this film Anthony Mann found his own John Wayne in James Stewart. Stewart collaborated with other directors (Hitchcock and Capra notably) but in Mann he found his alternate mantra that of an ambiguous hero verging on obsessed, unhinged, psychologically driven behavior.  Ford’s heroes were generally more straight forward white hat types though late in his career Wayne’s Ethan Edwards in “The Searchers” and to a lesser extent Tom Doniphon in “The Man Who Shot Liberty Valance” are certainly characters who struggle with life’s complexities and Edwards specifically is a man driven by traits that are both good and bad. 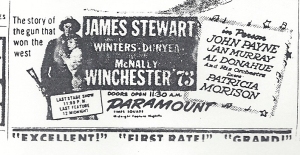 Stephen McNally as Lin’s evil brother is convincingly evil and just about as driven as his sibling. Noir favorite Dan Duryea also is adept at playing a malicious outlaw who hooks up with McNally for a bank robbery.   Look for newcomers Rock Hudson as the Indian chief who for a while is in possession of the Winchester and another unknown actor at the time , one Anthony “Tony” Curtis who has a small role as a Calvary solider prominently seen during the Indian raid scenes. James Best also has a small role.