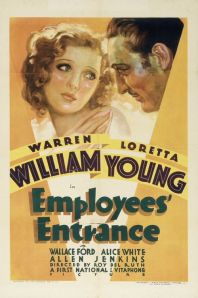 “Employees’ Entrance” is a classic! Not because of any artistic merit which there is little of but like most pre-code films for what is shown, said or at least insinuated. Themes that one year later after this film was released would be banned from the screen. With the enforcement of the production code, by Will Hays and company, the movie screen would be cleansed of nudity, loose women, drugs, cursing, homosexuals, sympathy for the poor and other so called vices and undesirable characters. American movies would be scrubbed clean of this kind of “filth” and homogenized into a world of celluloid unreality. And if and when they did appear, whores, murderers and their ilk would now be punished for their sins before the closing credits appeared on the screen. Even so called decent people, say for example married couples, could no longer sleep in the same bed. The baring of a female shoulder or a bit of leg was about as much nudity as you were going to get.

Of all the studios, Warner Brothers was the king of pre-code. The best, and again we are not talking artistic quality here, came from Warner Brothers/First National. Films like “Baby Face,” “Night Nurse,” “Blessed Event,” “The Public Enemy,” “Gold Diggers of 1933” are just a few of the Warner Brothers/First National films incorporating soon to be forbidden topics. While some of these films may seem dated, even quaint today, a few still pack a punch and even remain relevant in our current society. “Five Star Final” deals with the lack of integrity and exploitation in the newspaper world and “Employees’ Entrance” gives us a bird’s eye view of big business, corporate greed, profits at any cost mentality which certainly still exist today. From the exploited topless photos of Kate Middleton to greed on Wall Street these films, made more than eighty years ago, still resonates with us in our present day. END_OF_DOCUMENT_TOKEN_TO_BE_REPLACED