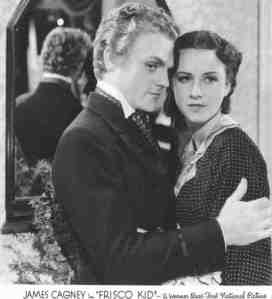 Unlike “The Oklahoma Kid” starring James Cagney and directed by Lloyd Bacon, “Frisco Kid” starring James Cagney and directed by Lloyd Bacon is not a western. “Frisco Kid” takes place in San Francisco’s vice and violent teeming Barbary Coast. Here Bat Morgan (James Cagney) is a sailor just arriving in town fresh from another voyage. He soon is shanghaied by powerful gang leader Spider Burke (Barton McLane). With the help of a friendly Jewish tailor, Bat overcomes Spider and sends him off to sea instead. Bat returns to the saloon run by the crooked Paul Morra (Ricardo Cortez) where he meets up with Shanghai Duck (Fred Kohler) who arranged the deal for Bat to be shanghaied. He confronts Shanghai, who has a lethal hook in place of his missing right hand, and they get into a ferocious fight that is one of the highlights of the film. Bat kills Shanghai, impressing Morra who offers him a job as a bouncer working in his saloon.  However, Bat has bigger ideas and soon becomes the boss of the Barbary Coast running a crooked casino and getting in with crooked politicians to take over the city. Bat meets Jean Barret (Margaret Lindsay) who runs the San Francisco newspaper and is trying to clean up the Barbary Coast along with the help of Judge Crawford.   Judge Crawford (Robert McWade) who seems to be the only honest man in town is soon murdered resulting in Bat being accused of the murder. Barbary Coast citizens are now outraged by the murder they want to clean up the city and resorting to a murderous mob rule, they hang Morra. Bat is spared the same faith with when Jean Barret realizes, after numerous denials that she love hooligan Bat and pleads for his life.

When the film opened in 1935 at the Strand Theater on Broadway, the New York Times gave it a good review calling Cagney’s character “a violent Irishmen who became the Al Capone of San Francisco’s vice district.” However, many critics were not impressed comparing it unfavorable to Howard Hawk’s “Barbary Coast” with Edward G. Robinson  and Miriam Hopkins which opened a month earlier the same year. ” “Frisco Kid” is a typical Warner Brothers programmer and not one of their best efforts. The film starts okay but is uneven and at times seems rushed. Bat Morgan’s rise to the top and the building of his grand saloon seem to happen quickly. Cagney and Margaret Lindsay do not seem to have much spark between them.  Most of their scenes fall flat. Director Lloyd Bacon and his crew do a nice job of creating the salty fog bound atmosphere of the Barbary Coast and the scenes of the fiery lynch mob are exiting and well done. Other cast members include Barton McLane, Lili Damita and Ricardo Cortez whose performance as rotten saloon owner Paul Morra is worth watching this film for by itself.