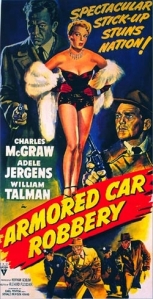 Director Richard Fleischer had a paranoid career as a moviemaker. There was the Richard Fleischer who made all those overblown big studio special effect abominations like “Dr. Doolittle,” “Amityville 3-D,” “The Jazz Singer,” and “Fantastic Voyage.” Then there was the Richard Fleischer who made some of the tightest nifty crime thrillers like “The Boston Strangler,” “10 Rillington Street,” “Follow Me, Quietly,” “The Narrow Margin,” “The Clay Pigeon” and “Armored Car Robbery.” Fleischer was no auteur but he was a solid craftsman. Over the course of his career his output was erratic and his later years films like, “The Don is Dead” were generally poorly received and of deteriorating quality.