I have always hesitated to watch this film because I, for whatever reason on my part, lacked any attraction to the two leading stars Betty Hutton and Eddie Bracken.  Well, I finally bit the bullet, smacked myself a couple of times and said this is a Preston Sturges film, just watch it! Subsequently I finally picked up a copy at the local library and happily report how foolish I have been to have avoided this clever work.

Trudy Klockenlocker (Betty Hutton) is a war time victory girl who dates soldiers about to leave for the war.  She sees this as her patriotic duty! On one of these wild evenings Trudy gets drunk, marrying one of the unknown soldiers she partied with and the next morning cannot remember a damn thing about how it all happened. Complications ensue when she soon finds out she is pregnant. Local 4-F Norval Jones (Eddie Bracken) is in love with Trudy tries to help (she borrows his car to go out and party while he goes alone to a movie) but cannot compete with the soldiers and constantly find himself in trouble with Trudy’s hyper protective father (William Demarest). False identities, jail time for Norval and the birth of sextuplets all contribute to the surprisingly miraculous and controversial going ons.

For the time period this has to be one of the most audacious comedies ever made, a bold satire making sophisticated fun of marriage, small town life, soldiers, and the government all the while pushing the buttons of the production code. Sturges takes on small town values, the sanctity of soldiers going off to war, local politics presenting an almost anti-Capraesque view of America reminding one that he was one of the best screenwriters of his time and now. 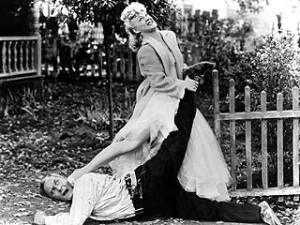 The film was held up from release for about a year resulting in Sturges having three films released in 1944 (Hail, The Conquering Hero and The Great Moment being the other two).  The film was a big hit with audiences when it hit the screens in January becoming Paramount’s biggest money maker for the year.
The cast includes fifteen year old Diana Lynn as Trudy’s kid sister along with many of Sturges regulars including Demarest, Chester Conklin, and Porter Hall among others. Reprising their roles from “The Great McGinty” are Brian Donlevy as the Governor, and Akim Tamiroff as the Boss in cameos.

Sturges received an Oscar nomination for Best Original Screenplay that year (he was also nominated the same year for “Hail the Conquering Hero”) losing to Lamar Trotti for “Wilson.” The Jerry Lewis/Frank Tashlin 1958 film “Rock a Bye Baby” is a loose remake of this film for which Sturges received a screenwriting credit.