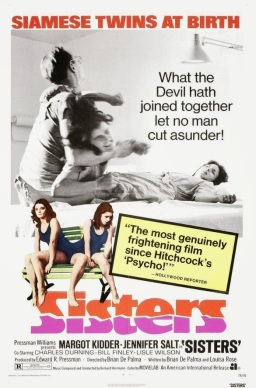 Brian De Palma admittedly has been tapping into Alfred Hitchcock since his earliest works going back as far as Murder a la Mod in 1968. However, many other filmmakers have drawn inspiration from or just plain copied the master of suspense over the years including Henri-Georges Clouzot (Diabolique), Jonathan Demme (Last Embrace), Francois Truffaut (Mississippi Mermaid), David Fincher (Panic Room), D.J. Caruso (Disturbia) and  Woody Allen (Match Point) just to name a few. It’s difficult to make a suspense film without leaning at least a bit on the master.  De Palma’s second foray into Hitchcock’s world came in 1973 with Sisters. After a series of low budget independent films: the previously mentioned Murder a la Mod, The Wedding Party, Greetings and Hi Mom! De Palma signed up with Warner Brothers to make the social satire, Get to Know You Rabbit. Creatively and financially it was a dud. END_OF_DOCUMENT_TOKEN_TO_BE_REPLACED