Phil Karlson made a string of crime films in the 1950’s that few could equal in volume and quality. One of his earliest and best is 1952’s “Kansas City Confidential,” a hard fisted noir thriller that never lets up in tension for its entire running time. Joe Rolfe (John Payne), is an ex-con, now gone straight, working as a florist delivery driver who is set up to take the fall for a $1.2 million bank robbery. The gang of four split up until the heat is off with plans to meet in Mexico where the money will be divided up. Through sheer perseverance, Rolfe pursues the robbers in order to clear his name; however,  but after the death of one of the crooks, shot by the police, he decides to muscle himself in on a share of the money.

The film is shot in a straight forward style with a grittiness and hard hitting violence, rare for its time. It also has the good fortune to have three of the 1950’s nastiest looking criminal character actors, Jack Elam, Neville Brand and Lee Van Cleef in the kind of roles they do best. Heading up the gang is Preston Foster, who plays Tim Foster, an ex-cop, gone bad, contemptuous that after twenty years on the force, his pension is so small. His plan included having his three heavies wear face masks at all times when they meet obscuring their identities from one another, lessening the chances one will squeal on the other if they should get caught by the law. Pete Harris (Jack Elam) is first, a nervous slimy looking gun happy thug. Next is borderline psychotic, the  stone faced Boyd Kane (Neville Brand) and the last member is Tony Romano portrayed by the snake like Lee Van Cleef. It’s a rogue’s gallery of menacing ugliness.

The heist goes off as planned except that the cops pick up Rolfe as part of the gang. The truck used by the robbers was an exact replicate of Rolfe’s flower delivery truck and the police quickly come to the conclusion he was in on the job. He is eventually proven innocent however, not before one sadistic cop applies third degree tactics for three straight days in an effort to beat the “truth” out of him. Rolfe is enraged that he has been unknowingly used as a sap in the robbery. He sets out to find the criminals and seek revenge. He finds them in Mexico and assumes the identity of one of Pete Harris, after he is shot dead by Mexican police. With other gang members unaware Harris is dead, Rolfe manages  to works his way into the gang posing as the dead gang member. However, it becomes complicated with the arrival of the gang leader, along with a woman, Helen (Coleen Gray), with who Rolfe begins a relationship. Helen, it turns out, is the gang  leader’s daughter.

“Kansas City Confidential” was one of the most brutal films to come out of the U.S. at the time and not surprisingly met with some censorship problems. It also met with wicked condemnation from critics including The New York Times’ Bosley Crowthers whose review consisted of nothing but complaining about the seedy characters and the violence. Crowthers also found it extremely hard to swallow that there could ever be a police officer who would be so brutally sadistic in attempting to coerce a confession out of a suspect.  “There is an obvious and sickening implication,” he writes,” that the Kansas City police are not only rough when they capture a suspect, but they exercise a wicked ‘third degree.’ There is one character in this little run-down, supposedly a plainclothes cop, who is as nasty and sadistic in behavior as the hero or any of the thugs. This, of course, does not lend a climate of hope or moral uplift to the film.”

The “one character” who is “supposedly a plainclothes cop” is no doubt a police officer. Mr. Crowthers inability to admit that this type of behavior sometimes exist is extraordinarily quaint.

John Payne who transitioned himself, career wise, from Mr. Nice Guy on screen played a similar role the following year in “99 River Street,” and again in “Hell’s Island,” two other edgy Karlson crime films  and suitable follow ups to this film. 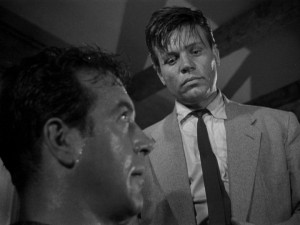 Phil Karlson made his way up from Poverty Row where he worked on the cheapest of  low budget fare like “The Shanghi Cobra” and “Dark Alibi,” two Charlie Chan mysteries,  and the Bowery Boys epics “Live Wires” and “Bowery Bombshell.” He was just moving into his golden age period with a series of films in the 1950’s that would cement his reputation as a fixture of classic low budget crime films. His works during this period included, “Scandal Sheet,” “99 River Street,” “Tight Spot,” “Five Against the House,” “The Phenix City Story” and  “The Brothers Rico.” He would also direct the two part TV premiere episodes, later combined and released in movie theaters, called “The Scarface Mob” from the TV show, “The Untouchables.”

Karlson’s later work would vary in quality ranging from the soap opera like “The Young Doctors” with an eclectic cast that included Dick Clark and Aline McMahon, an Elvis Presley remake of “Kid Galahad,” two Matt Helm films,  “The Silencers” and “The Wrecking Crew” featuring Dean Martin, the odd ball creepy horror fest about a young boy and his pet rat, “Ben” (sequel to Willard) and the red neck law and order anthem of the 1970’s, “Walking Tall.”

Richard Widmark in his screen debut dominates “Kiss of Death”, a fairly suspenseful film noir crime drama. As the crazed psychotic Tommy Udo, Widmark’s portrayal is just plain creepy and his performance alone makes this film a must see. The classic scene where Udo tosses wheelchair bound Mildred Dunnock down a flight of stairs still packs one a hell of a punch. The film stars Victor Mature as Nick Bianco, a small time crook who is caught after a Christmas Eve jewel robbery and sent to jail. Assistant D.A. D’Angelo (Brian Donlevy) tries to persuade Bianco to name his two partners in the robbery but Nick is no stoolie. This typical hoodlum stance however results in a twenty year sentence. Three years later after a visit from Nettie Cavello, a former babysitter for Nick’s family, Nick finds out his wife committed suicide after she was attacked by Pete Rizzo, one of Nick’s accomplices in the jewel robbery. Distraught Nick decides to tell the D’Angelo everything in exchange for a visit to see his two daughters. D’Angelo arranges for Nick to tell his crooked lawyer Howser that Rizzo squealed on him. Howser hires the now free crazed killer Udo to murder Rizzo. When Tommy gets to Rizzo’s apartment, he has already fled and the only person there is his wheelchair bound mother. Upset that Rizzo escaped, Udo ties mother Rizzo to the wheelchair with telephone cord and tosses her down a flight of stairs. Now released from jail, with the help of D’Angelo, Nick marries Nettie and with the two kids, they are living an honest and clean life. However, Nick still has some debt to be paid. D’Angelo wants him to get the goods on Udo. Nick meets with Udo who takes Tommy around the town introducing him to underworld characters, revealing enough information for Nick to tell D’Angelo who can now prosecute Udo. D’Angelo wants Nick who is living under an assumed name with his family, to testify against Udo, swearing that a conviction is a sure thing. Reluctantly Nick testifies however, Udo is found not guilty and released. Now knowing that Nick was a turn coat and squealed Udo is out to kill Nick. The confrontation that follows has Nick setting up a meeting with Udo who despises squealers so much he wants to shoot Nick personally, ignoring his cohorts advise about him being a three time loser if he is caught with a fire arm.  The films ending is fairly standard stuff. Nick survives the shootout and Udo goes to jail.

In addition, a large problem is its conflicting moral view. First, we are to root for Bianco living the criminal code and not squealing, a position most crime movies take. Then after finding out about his wife’s tragic death Nick turns stoolie and sings his way out of jail. At this point, the film now wants us to accept Nick the canary as the hero of the story.  Maybe this is the reason Udo was made such an evil despicable character so that is Nick’s canary singing does not look that bad when compared to the psychotic Tommy Udo tossing a sick old lady down a flight of stairs.

Victor Mature is a pretty stiff actor and gives one of his typical performances as Nick Bianco. For Coleen Gray, this was the first time she received screen credit and is decent as the adoring baby sitter with a crush on Nick. Coleen had previously appeared in a couple of other films unbilled. However, as mentioned earlier this is all Richard Widmark’s film. He is just amazing as the crazed wide eyed disturbed Tommy Udo, for which he was nominated for a Best Supporting Actor award. Listen and look at Widmark as Udo, the high pitched giggling voice. The hat he wears. It looks like the young Widmark here was auditioning for the role of The Joker for the next upcoming Batman movie.