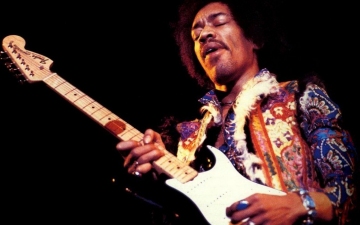 When Jimi Hendrix arrived back in the states from England, he along with his new backup musicians, Noel Redding and Mitch Mitchell, came back as rock stars. In Britain, The Jimi Hendrix Experience recorded a series of singles including, Hey Joe and Purple Haze. In 1967, the Experience came to America and really hit it big at the Monterey Pop Festival with Hendrix famously setting his guitar on fire. After the festival, the band went on tour with  the headlining teen pop group, The Monkees, which Hendrix nicknamed, the Plastic Beatles. It was an odd pairing to say the least. The crowds were mostly fans of The Monkees, young teenybopper girls and their mothers. The site of the psychedelic rock threesome with their wild clothes, permed hair and hard rock music must have shocked the mothers in the audience out of this house dresses. They must of thought the group ranked to the left of obscene.    END_OF_DOCUMENT_TOKEN_TO_BE_REPLACED