In the film’s pre-title opening sequence, the viewer finds himself in the middle of the ocean on a dark night. A Coast Guard boat pulls up to an anchored Yacht. Two men dressed in Coast Guard uniforms, armed with machine guns, come on board. Quickly and efficiently they kill everyone on the boat including a high level big shot named Julio Scolotti (Lincoln Demyan). Just as quickly we then segue to the classic Henry Mancini theme as the credits roll…Peter Gunn is back!

Daisy Jane (Marion Marshall), a Madame at a swank bordello, hires Gunn (Craig Stevens) to investigate the murder of crime boss Julio Scolotti believing it was the work of another criminal big shot named Nick Mancuso (Albert Paulson) looking to muscle in on Scolotti’s territory. By the end of the ninety minutes or so of bloodshed, corpses and women, Gunn proves he is as persuasive, slick and deadly as ever to both enemies and the ladies. This includes Laura Devon as Edie, his main squeeze, and an almost always semi-clad Sherry Jackson (Make Room for Daddy) who throws in her towel for Gunn time and time again.  After an additional few murders and some attempts on our heroe’s life, along with some twist and turns, Gunn uncovers the surprising truth. END_OF_DOCUMENT_TOKEN_TO_BE_REPLACED 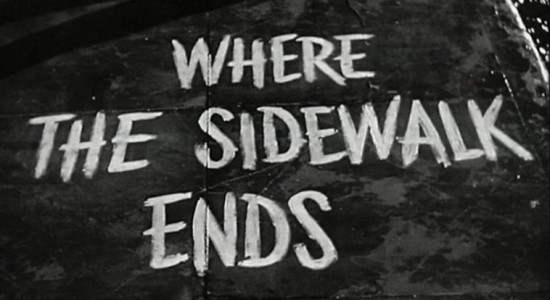 Detective Mark Dixon (Dana Andrews) is a cop whose head is filled with demons. He loathes criminals having had a father who was in the life. A bitter, brutal cop who does not like to follow the rules, he had no problem smacking around a potential suspect to get him to talk. A predecessor to Dirty Harry, Dixon’s views the law as way too soft on criminals.

Set in a New York filled with underworld thugs, the film is a dark look at Dixon’s obsessive pursuit of gangster Tommy Scalise, a former associate of his father. Preminger portrays Dixon as a loner, haunted by the past without any moral compass. 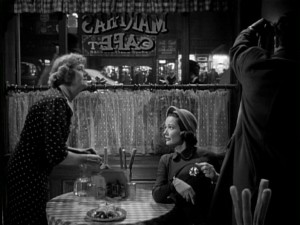 Kenneth Paine (Craig Stevens), a gambler and a decorated war hero gets into a fight with another gambler while gambling at one of Scalise joints. While investigating the murder Dixon accidently kills Paine. Dixon makes the crucial mistake of covering up the murder, even allowing Paine’s former father in law (Tom Tully) to be arrested for the crime, this after he begins a relationship with Morgan (Gene Tierney), a fashion model and Paine’s widow. As his life spirals out of control, Dixon attempts to frame Scalise for the two murders however, Dixon’s superiors see Morgan’s Dad as the prime suspect and it looks like he is going to take the fall. When convinced that Morgan will wait for him, love forces Dixon to face his demons and confess.

From the mid 1940’s to the early 1950’s Preminger directed a series of noir films that cement his reputation, starting with “Laura”, his most successful work. “Fallen Angel”, “Whirlpool”, “Angel Face” and “Where the Sidewalk Ends” followed. Working with cinematographer Joseph LaShelle in “Where the Sidewalks End”, they created a claustrophobic bleak seedy post world war two vision of 1950’s America. 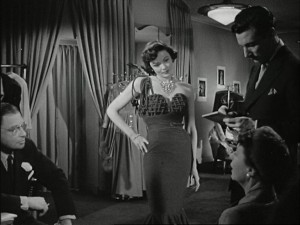 One of the most noteworthy shots takes place approximately 19 minutes into the film when Dixon goes to Paine’s apartment, apparently located on Pike Street in Manhattan. This is where Preminger and LaShelle recreate the famous Benenice Abbott photograph of the Manhattan Bridge framed by tenements on both sides. Modern audiences will recognize this shot as Sergio Leone recreated it once again in his own 1984 epic, “Once Upon a Time in America.”

The film is based on a novel called “Night Cry” by William L. Stuart. It was originally purchased by an independent producer named Frank P. Rosenberg Jr. who would eventually sell the rights to 20h Century Fox. Ben Hecht, who worked with Preminger previously, was assigned to write the screenplay. Apparently, earlier versions of the script had gangster Scalise as a drug addict but that was dropped from the script on orders from the censors. Still, Scalise throughout the film is seen using a nose inhaler that could suggest many things. Preminger shot for three weeks on location in New York before moving to Hollywood for the remainder of the shoot. 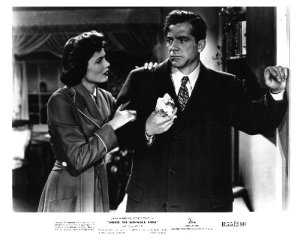 Dana Andrews and Gene Tierney were both veterans who worked with Preminger before, together in “Laura” some six years earlier, and separately. Andrews starred in “Fallen Angel” and “Daisy Kenyon” and Tierney previously worked on “Whirlpool.” Andrews plays Dixon as a loner (note how many shots Preminger has Dixon stand alone isolated from everyone else), a tight lipped, rage filled, yet vulnerable detective whose only outlet is taking it out on the gangster scum controlling the grimy streets. Tierney is very good as Morgan, a kind gentle woman forced to face unfortunate disastrous life situations that are out of her control. The cast also includes Gary Merrill, an interesting choice, as Scalise, Karl Malden as Dixon’s superior Detective Lt. Thomas, Neville Brand as one of Scalise’s hoods and Ruth Donnelly as a local restaurant owner/match maker. “Where The Sidewalk Ends” is just one of many superb film noirs released in 1950, a year that included Wilder’s “Sunset Blvd”, Dassin’s “Night and the City”, Kazan’s “Panic in the Streets”, Joseph H. Lewis’  “Gun Crazy” and Huston’s “The Asphalt Jungle.”