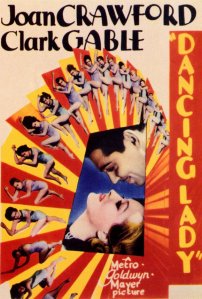 The same year Warner Brothers released 42nd Street (1933) MGM came out with Dancing Lady, a backstage musical complete with a Busby Berkeley style finale. If you had to compare the two, the win would certainly go to 42nd Street, one the great Warner Brother musicals of all time. However,  Dancing Lady is entertaining if not exactly a knockout, the film can certainly hold its head high. It is just not in the stratosphere of great musicals like its better known counterpart.

The film has a pedigree cast with Joan Crawford, Clark Gable and Franchot Tone in the leading roles. Joan is Janie “Duchess” Barlow, a virtuous downtown burlesque dancer whose dream is to make it to the big time on Broadway. Slumming one evening with his multiple girlfriends is millionaire playboy Tod Newton (Franchot Tone). The Burlesque house is raided that same evening and Janie and the other girls are all hauled off into court. Tod and his entourage decide to go to court for the entertainment value of the proceedings. Once there Tod suddenly takes a surprising interest in Janie and ends up paying her bail. END_OF_DOCUMENT_TOKEN_TO_BE_REPLACED