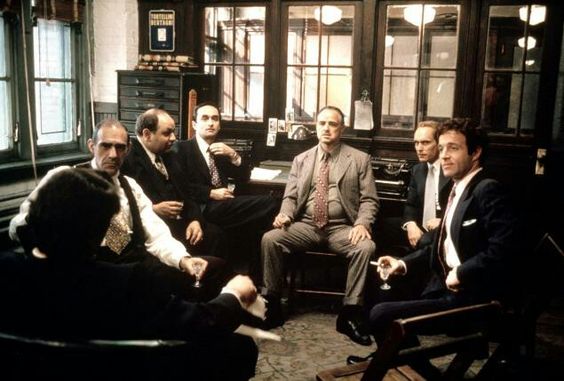 Over the last several days I have been watching the approximately 423 minute version of The Godfather and The Godfather 2 entitled The Godfather Epic. It’s a re-edited version of the first two films in chronological order with some deleted footage included.  The Godfather Epic was originally released in 1990 as a box set on VHS. A similar version, running slightly longer at 434 minutes, known as The Godfather: The Complete Novel for Television, aka The Godfather Saga was broadcast on NBC back in November 1977.[1] As mentioned, both versions include scenes not in the final films such as  Michael’s first meeting with his father after returning from Sicily and Sonny’s taking charge of the family after his father was severely shot in an attempted assassination. In total, the Novel for Television/Saga included approximately 75 minutes of unseen footage. Since it was made for broadcast television some scenes of violence and nudity were trimmed to meet the commercial TV standards of the day. END_OF_DOCUMENT_TOKEN_TO_BE_REPLACED 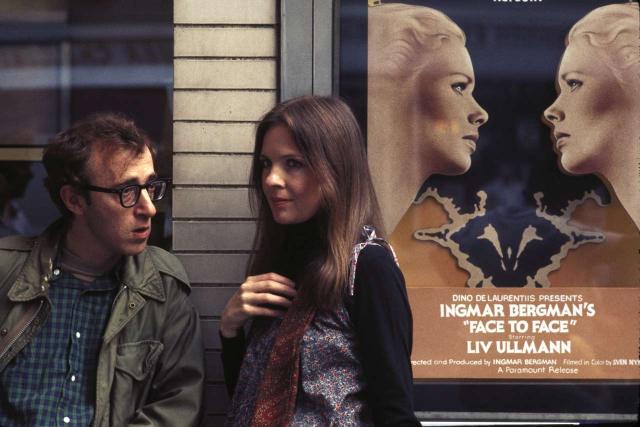 The 1970’s were not a good time for romantic comedy, that is, until 1977 when Woody Allen, who had been making films since 1966 (What’s Up, Tiger Lily), released a little film called Annie Hall. Woody had been directing and writing films throughout the decade. They started off episodic and even visually sloppy; however, they all had one thing in common, they were funny. But with each film Woody’s visual style improved, he kept getting better and better. Then in 1977 came a giant leap. END_OF_DOCUMENT_TOKEN_TO_BE_REPLACED 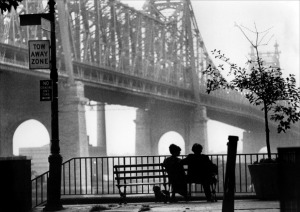 “You have to have a little faith in people” – Tracy.

In “Manhattan,” Woody Allen’s New York is a world filled with artists, poets, musicians, writers, intellectuals and psychoanalyst. It’s an oasis of art galleries, museums, books and neurosis. Gershwin’s “Rhapsody in Blue” fills the air as Gordon Willis’ superb black and white photography paints a majestic world of urban beauty. Filmed in Cinemascope, the black and white images instill a sense of character with every image we see. The city itself is the main character in this film with everyone else in a supporting role.   John Baxter in his excellent biography on Woody states accurately, “While the opening montage recalls the unblinking succession of images with which Antonioni closed L’Eclisse in 1962, Allen’s use of the city as a character exactly parallel’s Fellini’s treatment of Rome in La Dolce Vita.” Baxter also notes other similarities including the ending “in which Marcello Mastroianni tries to talk to the girl on the beach, only to find they can’t communicate.” This easily parallels Isaac’s attempt to mend his relationship with Tracy just as she is leaving for London. END_OF_DOCUMENT_TOKEN_TO_BE_REPLACED 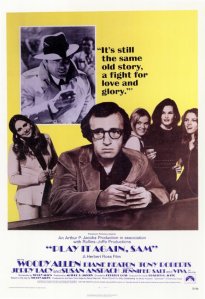 “Play it Again, Sam” is the Woody Allen film that is not really a Woody Allen film but then again…it really is. Huh? This is just my convoluted way of saying that Woody did not direct the film, but and that is a big but, the script and the play the film is based is pure Mr. Allen.  So why didn’t Woody direct this film? Made in 1972, it was still early in his directing career and “Sam” is more of a character driven script than his previous directorial efforts up to that time (Bananas, Take the Money and Run and What’s Up Tiger Lily). Still unsure of himself, he agreed to have Herbert Ross direct.

I have been a big Woody Allen fan since I first saw him do his stand up act on the Ed Sullivan show back in 1965 and that same year caught him on the big screen in “What’s New Pussycat?” at the old Astor Theater on Broadway. Around the same period I discovered in a record store one of Woody’s comedy LP’s (Woody Allen Vol. 2) and scooped that up. Over the course of his stand up career Woody made three comedy LP’s (two on the Colpix label, “Woody Allen”, Woody Allen Vol. 2″ and his last, “The Third Woody Allen Album”, on Capital) that are now long out of print though they have resurfaced over the years in compilation copies under various names (Woody Allen: The Nightclub Years 1964-1968 and Woody Allen: Standup Comic) and cover art. The oddest cut on one of the original albums was a pantomime routine that lasted about two minutes. Yes, you’re reading this right, pantomime on vinyl! Two minutes of nothing but audience laughter. It was like watching a sit-com  minus the show.  END_OF_DOCUMENT_TOKEN_TO_BE_REPLACED 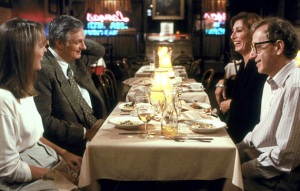 “Manhattan Murder Mystery”  is one of my favorites and maybe is my all time favorite Woody Allen film. Like many, I am a fan of “The Thin Man” movies and other amateur sleuth husband and wife type films that have appeared over the years. Think “The Ex-Mrs. Bradford” or “There is Always A Woman” or “Mr. and Mrs. North.” They’re light, entertaining and if you’re lucky there is a good mystery and some laughs.

The film is a throwback to some extent of Allen’s earlier work, which make sense since the script written by Allen and his former partner Marshall Brickman years ago and tossed in a draw only to be excavated after the trials, tribulations and accusations of his former lover Mia Farrow. Mia was originally supposed to play the part of Carol but due to all the personal animosity, Allen wisely sought out former lover and screen co-star Diane Keaton.  And let me say, Keaton is a marvel here, the driving force of the entire story. They look as comfortable working together as a pair of well-worn shoes. 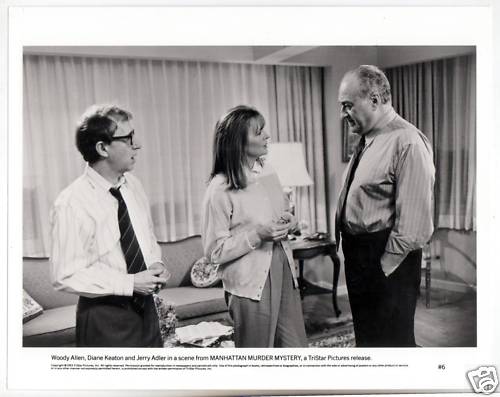 One criticism that has been leveled at the film is that Allen and Keaton are just playing older versions of Alvy Singer and Annie Hall. While there may be some validity to this, I don’t see it as detrimental. After all, didn’t Chaplin mainly play the same tramp character in each of his films as did Laurel and Hardy and Bob Hope.

Larry (Allen) and Carol (Keaton) Lipton are a empty nest couple living on the Upper East Side of New York. Their son Nick (Zach Braff) has recently gone off to college and they spend their time having dinner with friends, going to hockey games, movies and concerts. After walking out of Lincoln Center one night in the middle of a concert Larry quips, “I’m sorry, but every time I hear Wagner, I get the urge to conquer Poland.” 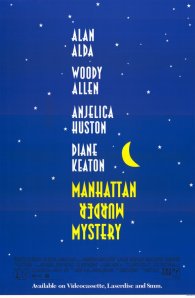 One Saturday evening after a hockey game at Madison Square Garden, Larry and Carol meet their neighbors Paul and Lillian House.  The older couple invites the Lipton’s in for a cup of coffee. While Lillian shows Carol her new exercise machine, Paul bores Larry with his stamp collection. “My favorite thing in life is to look at cancelled postage,” say Larry, who is more interested in watching an old Bob Hope movie that was going to be on TV.

Soon after, Lillian House dies and Carol becomes suspicious and obsesses about the woman’s death because Mr. House does not seem remorseful enough about his wife’s passing.   At first, Larry is reluctant to go along with Carol’s theories but is soon caught up in “her murder case” as she insistently calls it at one point. Also getting involved in the case is their friend, recently divorced playwright Ted (Alan Alda), who is not too subtle about his crush on Carol, continually encouraging her to open up a restaurant that he would help her run. “Ted sees himself as Rick in “Casablanca, I see him more as Peter Lorre”, Larry retorts.

Larry tries to hook Ted up with Marcia Fox (Angelica Huston), a novelist and sexy client of Larry’s, who is a book editor for Harper’s Publishing. Marcia’s creative mind conjures up a plan to expose Mr. House as the killer. Her theories on the murder, which turn out to be fairly correct, along with her sexy presence clearly intimidate Carol and turn on both Ted and Larry.  Carol in fact believes Larry is a little too fascinated with the tantalizing Marcia. 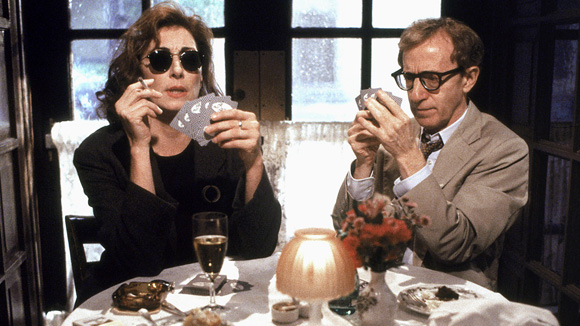 The Lipton’s get more and more involved until the climatic ending that screenwriters Allen and Brickman set up in a repertory movie theater in Queens, owned by Mr. House, and an ending that mirrors Orson Welles “The Lady from Shanghai.”

Allen, as he does in many of his films, references classic movies. At the beginning of the film, Larry wants to get home quickly after the hockey game to catch a late night Bob Hope movie (Hope was an Allen favorite and clearly a large influence on the Woody persona.) Early in the film they also meet two friends at a flea market on Canal Street (Ron Rifkin and Joy Behar), and together attend a showing of Billy Wilder’s “Double Indemnity.” Finally, at the end of the film is the shoot out that  pays homage to Welles “The Lady from Shanghai.” 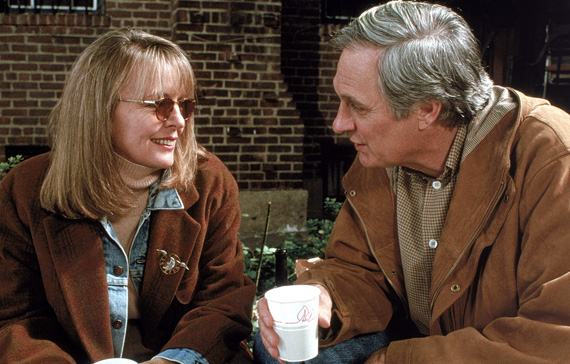 Along with Keaton’s fine performance, and the natural camaraderie and charm between her and Allen, Angelica Huston’s portrayal of the sexy long-legged confident Marcia Fox is a joy to watch.

My only problem with the film is the shaky hand-held camera work of cinematographer Carlo DiPalma, which I found intermittently annoying. His seemingly useless movement of the camera, in a restaurant scene where Allen and five other principals are discussing the murder, constantly blocking the character who is speaking by placing the camera behind the head of another. At times like this, it was downright frustrating.

At the time it opened “Manhattan Murder Mystery” was met with generally good reviews but was accused of being a lightweight Allen comedy and it is. This is no “Crimes and Misdemeanors” or “Husband and Wives.” As a mystery, do not expect Raymond Chandler or Dashiell Hammett.   What we get is a neurotic Nick and Nora Charles fumbling their way through a murder “investigation.”  At one point, Larry ever reluctant to get involved tells Carol to “save the craziness for menopause.”