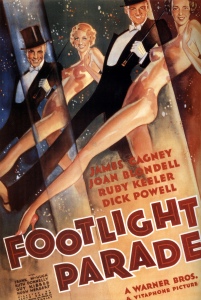 Check out my fifith of seven entries I am writing for the Musical Countdown being hosted by WONDERS IN THE DARK. Here is the link. 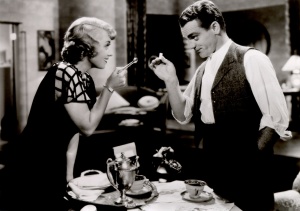 “The Tall Target” takes place almost one hundred percent of the time on a train. Anthony Mann has created an enclosed, claustrophobic, moody thriller set just days before the inauguration of President Abraham Lincoln. It’s difficult enough to make a great thriller but when your audience already knows your target is going to survive, well it just makes it all the much more or a challenge. Mann, I am happy to say was up to the task.

Dick Powell, who by 1951 had already made the transition from song and dance man to the dark lit streets of hardboiled film noir, is New York City policeman, John Kennedy. Kennedy has discovered a plot to assassinate the newly elected President. His superiors in the department do not take his findings  seriously; Kennedy soon resigns in disgust. He arranges to be on board the night train heading to Washington D.C. in an attempt to intercept the inaugural train in Baltimore and expose the plot.

On the train, Kennedy’s world is one of paranoia, darkness and confrontation from forces wanting to prevent his interference. His attempts to investigate and expose the assassination plot are continually met with suspicion and disbelief. Multiple efforts are made on his life. Friends and strangers alike become enemies. No one can be trusted. Every passenger on the train seems to be in a very tense state. A mixture of Yankees and Rebs, both sides are outspoken about their views on the new President and with each other making for quite few potential suspects. END_OF_DOCUMENT_TOKEN_TO_BE_REPLACED

Post war American bliss is shaken to its core in this Andre DeToth tale of the company man’s discontent. The film opens in a “Father Knows Best” environment complete with Jane Wyatt as Sue Forbes, though in a much sterner version than the thoroughly sweet homespun loving wife/mother she portrayed on the 50’s TV show. Making breakfast for her family, she calls up to husband John (Dick Powell) telling him to hurry or he’ll be late to the office. John’s been a good husband providing for his family, even as he grumpily notes at the breakfast table he feels like he is in a rut, a “six feet deep” one.  After all, he married the prettiest girl in school and he was voted the most likely to succeed; he should be doing better, and not just another average guy working for an insurance company.

END_OF_DOCUMENT_TOKEN_TO_BE_REPLACED 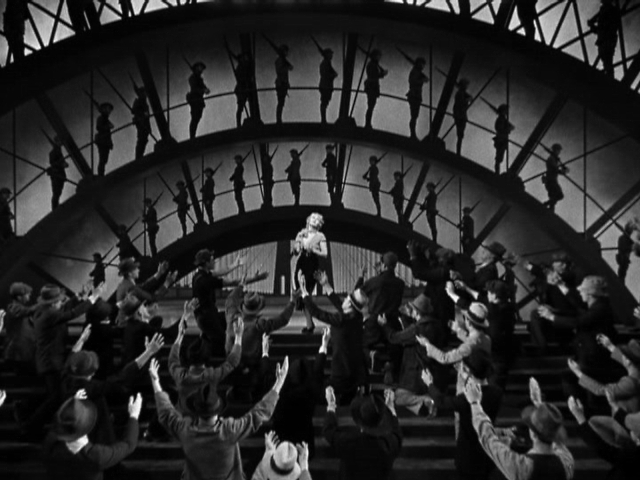 Directed by Mervyn LeRoy with songs by Al Rubin and Harry Warren and choreographed by Busby Berkeley (in the credits he is listed as dance director), Gold Diggers of 1933 was the second of Warner Brothers three 1933 backstage musicals, all reflecting the depression though none as directly and straight forward as this one.

The film opens during a rehearsal of the ironic and iconic song, We’re in the Money. It’s sung by Ginger Rogers (Fay) in a full face close up dressed in an outfit lined with silver dollars and a strategically placed large silver dollar covering her “private parts.” Along with a chorus of scantily dressed showgirls, Rogers sings the Al Dubin/Harry Warren standard.  Rogers even does one amazing verse of the song in Pig Latin. It’s a brilliant start to what is, arguably, the grittiest musical ever made. The musical number comes to an unexpected end when the sheriff and his boys come in and seize all the property and costumes including snatching Ginger’s most personal piece. This opening scene sets up the tone for the rest of the story, with Fay sarcastically informing the three leading ladies, as they talk about being out of work again, “it’s the Depression, dearie.”