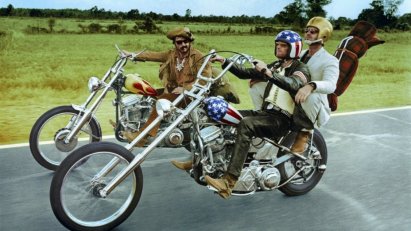 “You know, this used to be a helluva good country. I can’t understand what’s gone wrong with it.” – George Hanson

I originally was going to write about the year 1969 in film, but with the recent passing of Peter Fonda (in August) I turned my thoughts toward Fonda and Easy Rider.

It’s hard to believe that in Quentin Tarantino’s recent ode to 1969, Once Upon a Time in Hollywood, that neither Peter Fonda nor Dennis Hopper did not get a mention. Both are icons of the period. Though born into Hollywood royalty, Peter Fonda embraced the spirit of the sixties rebellion. He could have easily followed the path other Hollywood offspring and become a typical Hollywood idol in the tradition of Michael Douglas or Nancy Sinatra, instead, Fonda grew his hair long, rebelled, and became a symbol of the growing counterculture.