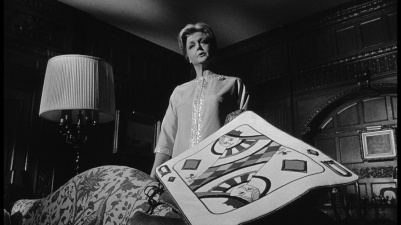 Frank Sinatra was never shy about expressing his political beliefs. As far back as 1945, he made The House I Live, an eleven minute short film with a plea for tolerance. By 1960, Frank was back on top of the entertainment world. He was one of the most powerful figures in Hollywood. Still a political liberal, Sinatra wanted to produce and direct a serious film. He chose William Bradford Huie’s non-fiction book, The Execution of Private Slovik (1954), the story of the only American soldier executed since the Civil War. Sinatra hired Albert Maltz, who coincidently happened to have written the The House I Live In script to do the adaptation. Maltz was one of the original Hollywood Ten blacklisted in Hollywood. By 1960, HUAC and the witch hunts were over, though remnants of the stink it created remained. Many writers still could not get a job, at least under their own name.  END_OF_DOCUMENT_TOKEN_TO_BE_REPLACED

Before Elvis, before The Beatles, before Michael Jackson and before whomever the latest pop star of the day is…there was Frank Sinatra. The teenage girls of the day swooned, screamed and peed in the panties uncontrollably  when Sinatra sang on stage at theaters like the Paramount theater in New York City. By the late 1940’s though Frank’s career was in a downward spiral. His film career up to this point was mediocre. There was the occasional big hit like Anchors Aweigh, On the Town and Take Me Out to the Ballgame, but more often there were second-rate films like The Kissing Bandit, Double Dynamite and It Happened it Brooklyn. More importantly for his career, his popularity on the record charts was also spiraling downward. Frank, of course, would rebound in the early 1950’s in both film and his music, but things were shaky for the future Chairman of the Board during the post war years. So why write about one of Sinatra’s less important films? There was a personal connection, well sort of, that attracted me to watch.  END_OF_DOCUMENT_TOKEN_TO_BE_REPLACED

As the title states, It Happened it Brooklyn, takes place in New York City’s largest, population wise, borough. To be more specific, the film takes place in the Bensonhurst section of Brooklyn at New Utrecht High School. It’s located on 80th street between New Utrecht Avenue and 16th Avenue. That’s about three blocks from where I lived long ago. I am being so specific here because, as you may have already guessed, New Utrecht, is my high school alma mater. Most of the film, except for a few early scenes in the film, take place at the school. Of course, the school you see on screen is a set in Hollywood. To see the real school, all one has to do is watch the opening credits of Welcome Back, Kotter. Those shot of the school in the background as an elevated train passes by is New Utrecht. As an aside, the series star, Gabe Kaplan was an alumni of the school. END_OF_DOCUMENT_TOKEN_TO_BE_REPLACED 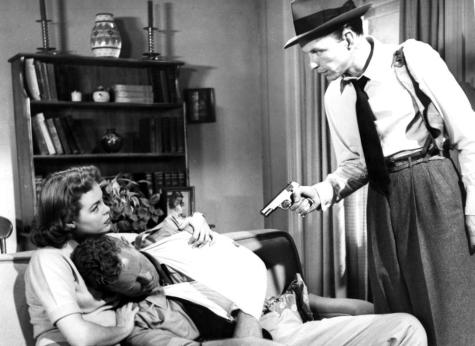 It was a strange choice for a follow-up to his big comeback Academy Award winning role as Maggio in Fred Zinnemann’s From Here to Eternity, but Frank Sinatra was never one to do what was expected. Released in 1954 by United Artists, Suddenly is a tale about three hired killers who come to the small California town of Suddenly with plans to assassinate the President. Written by Richard Sale, arguably best known today as the director of an early film, Let’s Make it Legal, that had a young Marilyn Monroe in its cast, Suddenly is a tight little thriller with a surprisingly nasty performance from its star. END_OF_DOCUMENT_TOKEN_TO_BE_REPLACED 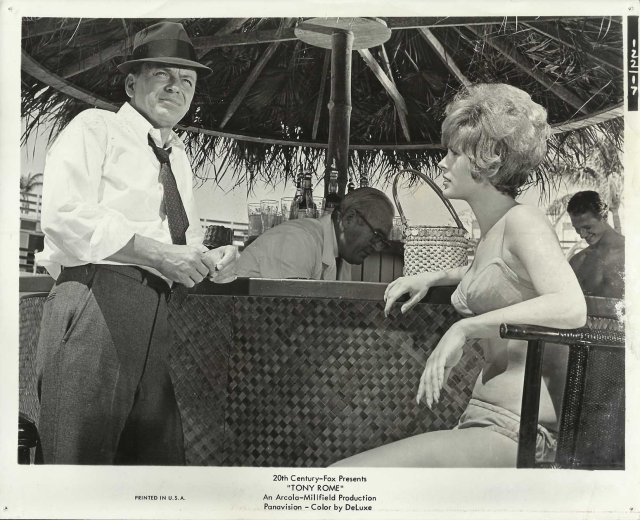 The private detective film made a comeback in the mid to late 60’s thanks to the Paul Newman starring 1966 film Harper. (There were shades of Bogart and a good story line thanks to the source novel The Moving Target by Ross MacDonald). Other films soon followed (P.J., Marlowe) in its successful path including Tony Rome released the following year.

By 1967, Frank Sinatra’s film career was once again on a slide downward, unlike Newman’s who pretty much ruled the screen in the 1960’s. The original Jersey Boy made three mediocre films in a row (Marriage on the Rocks, Assault on a Queen and The Naked Runner). They were films he walked through and he looked as bored as the films were themselves. With Tony Rome, Sinatra, the actor, found his way back with the kind of smart ass, wise guy loner the public always kind of felt the singer/actor was in real life. Sinatra does look a bit too old for the role, he was 51 and looked even older. Just compare a photo of 51 year old Brad Pitt next to Frank, the difference is obvious. However, that hard, tired face and look surely adds to the aura. END_OF_DOCUMENT_TOKEN_TO_BE_REPLACED 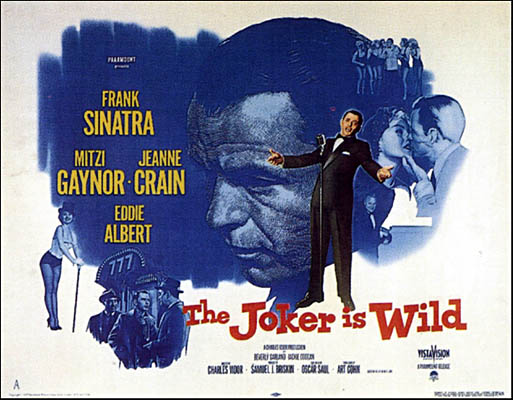 My parents did not go to the movies too often, though when they did they generally took me along. Sure my Mom did take me to the Disney movies of the day like Tammy and the Bachelor, Dumbo and whatever other family fare was out there during the summer, but as a family, meaning my Dad came along, it was not too often. I can remember family viewings of The Bridge on the River Kwai, The King and I and a little gem called The Joker is Wild. I was only about nine years old at the time, yet the film had a memorable impact on me. What made it so unforgettable was Frank Sinatra. We didn’t have a record player at the time but our home was always filled with music on weekend mornings with the sounds of Jerry Vale, Nat King Cole, Perry Como and a lot of Frank Sinatra. There was a radio show on WNEW-AM called The Make Believe Ballroom with D.J. William B. Williams. Williams played a lot of what he called The Great American Songbook and tops on his list was Sinatra. I bring this all up because, as far as I can remember, The Joker is Wild was the first movie I ever saw with Frank and there is a certain scene where Sinatra, as Joe E. Lewis, is badly beaten up by some mobsters. This all happens off screen but you see the aftermath which resulted in a scarred face, a cut tongue and an amazed little kid in the theater. END_OF_DOCUMENT_TOKEN_TO_BE_REPLACED 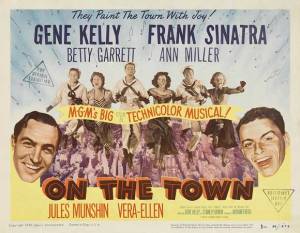 The Bronx is up and the Battery’s down

The people ride in a hole in the ground

And with these words “On the Town” gets off to a rousing start gliding us through a montage of three sailors on a one day pass seeing the sights of the city, New York City. The Brooklyn Bridge, the Village, Little Italy, Chinatown, the Statue of Liberty, Times Square, Central Park, the Empire State Building and Rockefeller Center. It’s a world wind tour, a sparkling pioneering opening and possibly an early inspiration on music videos. Based on the 1944 hit Broadway musical with music by Leonard Bernstein and lyrics by Betty Comden and Adolph Green. The book, also by Comden and Green, was based on an idea for a ballet called “Fancy Free,” by Jerome Robbins who choreographed the stage production. In 1949, MGM brought the musical to the screen and of course had to change things including dropping most of the original songs and adding new ones (Bernstein’s music was considered too highbrow for movie audiences), this despite the fact that MGM was an investor in the stage production! Only four songs survived and, of those, the opening number had to be “toned down” (the line New York, New York, It’s a hella of town was change to read it’s a wonderful town) to appease the censors and blue noses. Additionally, the storyline was changed, enlarging and focusing more on Gabey (Gene Kelly) and Ivy (Vera Ellen) than Ozzie (Jules Munshin) and Claire (Ann Miller). END_OF_DOCUMENT_TOKEN_TO_BE_REPLACED