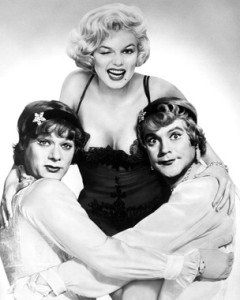 This posting is my contribution to the CMBA Comedy Classics Blogathon which runs through Jan. 27th. You can find more contributors here.

Do you remember the first film you ever recorded? I do, it was Billy Wilder’s “Some Like it Hot” way back sometime in the 1960’s. “Wait a minute!” You say, “How can you have recorded it back in the 1960’s when VCR’s did not come out until the late 1970’s?” Well, it was simple, on a reel-to-reel tape recorder. I loved this film so much I recorded the entire soundtrack. I use to lay down in bed or on the couch with my headphones on and listen to the entire movie, visualizing all the scenes.

Crazy, weird? Probably, I am sure my parents thought so.

Needless to say, “Some Like it Hot” is one of my favorite movies, it has stood the test of time. Because of this film, I became a lifelong admirer of both director Billy Wilder and Jack Lemmon. It is a film I never get tired of watching.

Before and since its release in 1959, there have been many films that have used men in drag as a plot device (“I Was A Male War Bride”, “Tootsie”, “La Cage aux Folles”), even TV shows like “Bosom Buddies” got into the act, however none have come close or surpassed “Some Like it Hot” in its farcical humor. The well-known storyline is simple, it is 1929, two Chicago musicians, Joe (Tony Curtis) and Jerry (Jack Lemmon), witness The Saint Valentine’s Day Massacre after which they decide it might be best for their health if they leave town. The only jobs available are as musicians in an all girl band heading for Florida. It is at the train station they meet Sugar “Kane” Kowalczyk (Marilyn Monroe) a ukulele player and singer with the band. END_OF_DOCUMENT_TOKEN_TO_BE_REPLACED

“Kind Lady” is a 1951 remake of a 1935 film based on a play written by Edward Chodorov which itself was based on a story by English novelist Hugh Walpole. The story is involves an elderly woman and art collector (Ethel Barrymore) who meets a starving artist (Maurice Evans) and sociopath who charms his way, with the help of friends, into her house.  Posing as her nephew he holds her prisoner in her own home convincing everyone the kind lady is mentally incapable of taking care of her own affairs. The film is a little loose in style rendering it less effective as a shocker than it could have been but it does have its share of good moments. Fine performances from Barrymore and Maurice Evans. Cast also includes Angela Lansbury, John Williams, Keenan Wynn and Betsy Blair. John Sturges, best known for his work on “Bad Day at Black Rock” and “The Magnificent Seven” directs. (***1/2) END_OF_DOCUMENT_TOKEN_TO_BE_REPLACED 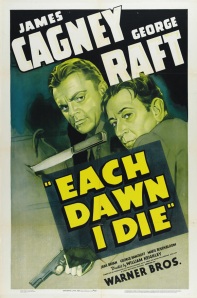 It is Cagney versus Raft in the classic 1939 Warners prison drama EACH DAWN I DIE. Directed by William  Keighley, Cagney is Frank Ross an investigative reporter who exposes a political candidate’s corrupt association with a construction company. After the article is published,  Ross is snatched by some goons right in front of the newspaper building, knocked out, and soused with alcohol he is sent away in a speeding car which results in a car accident with three innocent people being killed. Framed for the murders, Ross is sent to prison where he meets big shot Stacey (George Raft). At first, they get off on the wrong foot with Ross continuing to claim he was framed and innocent, all falling on deaf ears with both prison officials and his fellow inmates. The two soon become pals when Ross saves Stacey’s life from an attempt by another prisoner to kill him.

The film has all the by now standard prison themes you expect, the innocent man who  was framed, the prisoner who is a snitch, the sadistic guard, the prison system that turns a good man bad, the prison break and the riot. It’s all there but what is most exciting is Cagney! Brash, cocky and full of himself, grinning confidently just the way we like him. Here he gets to face off against George Raft, who by the way hooked up with some real gangsters in his off-screen  life, and is even better known for giving Humphrey Bogart some of the best roles of his career when he turned down “Casablanca” and “High Sierra.” Raft is fine as Stacey but the film belongs to Cagney who goes through an entire array of emotions from a wronged innocent to a crazed bitter jail-bird locked up in solitary.

The cast also includes George Bancroft as the Warden, Victor Jory as a corrupt member of the parole board, Jane Bryant as Cagney’s loyal girlfriend fighting for his release and former boxer Slapsie Maxie Rosenbloom. This is the kind of film you expect from Warner Brothers, hard-hitting, socially conscience and gritty. 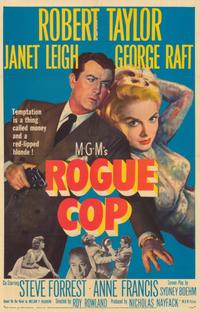 MGM was not known for its hard–hitting crime films though in reality they had their share, “Johnny Eager” and “The Beast of the City” to name a couple. In 1954, MGM released “Rogue Cop”, a crooked cop saga that can hold its own against other 1950’s crime films like “The Big Combo” and “Kansas City Confidential.”   The film stars former matinee idol Robert Taylor, along with Janet Leigh, George Raft and Anne Francis. For Taylor, the role of a crooked cop may be viewed as a stretch though he did play a gangster years earlier in “Johnny Eager.” For George Raft, it was a comeback of sorts, a return to the gangster role that he avoided for more than 15 years. The two leading ladies are both gorgeous and hold their own especially the under appreciated Anne Francis who plays Raft’s alcoholic girlfriend.  Her performance is really the standout in the film. The screenplay is by Sidney Boehmn, who wrote such other gripping crime films like “The Big Heat” and “Violent Saturday.” Boehmn’s screenplay was adapted from a novel by William McGivern. McGivern novels were also the source for many crime genre films among them “The Big Heat”, “Odds Against Tomorrow” and “Hell on Frisco Bay.”  Cinematographer John F. Seitz received an Oscar nomination for his excellent black and white cinematography.

While not perfect, “Rogue Cop” is a gritty tough film with Taylor providing a better than usual performance as the corrupt flawed detective Christopher Kelvaney, and George Raft is always at his best when he portrays a criminal. The acting highlight, as mentioned, really belongs though to Anne Francis who is the pathetic victim of Raft’s  low-key but sadistic hood with little so regard, after she misguidedly laughs at him after being beaten up by Kelvaney,  sends her over to some “friends” to have their ways with her. While you never see on screen what happens, the next time you see Francis you can just read her face and easily assume the horror she went through at the hands of  her former lover’s  “friends. “Rogue Cop” is a decent entertaining film noir that will not disappoint you.