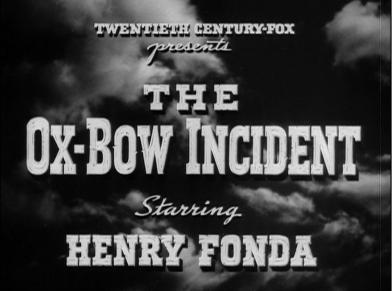 At this point in his career, Henry Fonda was not happy with most of the films he had made. Steinbeck’s classic novel, The Grapes of Wrath, was certainly one he was proud of, and thanks to John Ford, he got the role of a lifetime. Like Brando as Stanley Kowalski, or Cagney as George M. Cohan, it’s difficult to imagine anyone else fitting the role of Tom Joad other than Henry Fonda. But there was a price to be paid for getting that part. 20th Century Fox honcho, Darryl F. Zanuck would only give him the role if he signed a contract with the studio. One of the films he made for Fox during this period was The Ox-Bow Incident, based on Walter Van Tilbert Clark’s extraordinary novel. Directed by William “Wild Bill” Wellman, the film is an oddity in westerns of the period. In 1943, the war was on and most films focused on lightweight escapist entertainment, a two hour break from worrying about husbands, fathers, sons and the horrors of what was happening in the world. The Ox-Bow Incident was not lightweight entertainment, it was a downbeat, ugly look at humanity with little gun play. Instead it focused on vigilantism, group mentality that reduced men to the lowest primal level of thoughts and deeds.  It is arguably the first psychological western ever made. END_OF_DOCUMENT_TOKEN_TO_BE_REPLACED