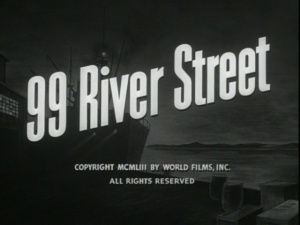 In the 1950’s film director Phil Karlson put out a series of solid crime dramas including, “Scandal Sheet,” “Five Against the House,” “Tight Spot,” “The Phenix City Story” and two works with John Payne, “Kansas City Confidential” and “99 River Street.” Karlson made his way up from Poverty Row working with the Dead End Kids (Live Wires and Bowery Bombshell) and Charlie Chan (Dark Alibi) to working on “B” features for the big Hollywood studios.  In the 1960’s Karlson worked with Elvis (Kid Galahad), Glenn Ford (A Time for Killing), also a couple of Dean Martin’s Matt Helm films before hitting box office big time with the south’s version of Harry Callahan, “Walking Tall,” the story of Buford Pusser, a Southern lawman willing to break the law in order to fight injustice.