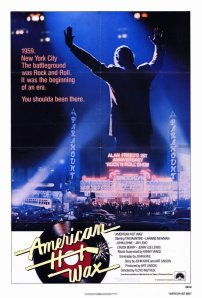 “American Hot Wax” may not be totally accurate (it’s not) but it does capture the favor, the spirit, the recklessness and the music of the early days of Rock and Roll. It does this through an excellent performance by Tim McIntire and the music by many of the great artists of the day including Frankie Ford, Screamin’ Jay Hawkins, Kenny Vance, Chuck Berry and Jerry Lee Lewis. The films center is Alan Freed   credited incorrectly with coining the phrase rock n roll, a term whose original meaning was a slang term for  sexual intercourse and had been used in a few songs going as far back a 1922*. Freed started in Cleveland,  put on live shows, moved to New York on 1010 WINS then to WABC Radio before being fired when he refused to sign a statement certifying he never accepted a payola payment.   Payola was rampant with DJ’s throughout the U.S. but Freed was one of the main targets, and a symbol of investigators and whose career would suffer the most. After he was fired by WABC, Freed never was able to find work with a major radio station again but like the screen Alan Freed tells the police toward the end of the movie “you can stop me, but you can never stop rock and roll.” 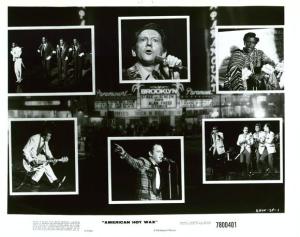 The movie plays loose with the facts, director Floyd Mutrux admits that he took some artistic license with the storyline in the film including changing the sequential order of Freed’s final days as a New York DJ. The screenplay unfortunately lacks any depth only skimming the surface of Freed’s character also making him much more of a saint than he really was.  You don’t learn much about him except for his passionate rebellious love for rock and roll, his willingness to play black music along with the fact that he smoked and drank too much.  Mutrux does not even touch on Freed’s sharing of songwriting credit as a form of payment. This co-writing credit was not limited to just Freed, it was common practice among top DJ’s and popular singers. Dick Clark was well known for sharing copyright credit.  Even Elvis Presley received songwriting credit receiving royalty for songs like Heartbreak Hotel among others early in his career. 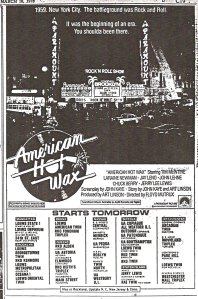 The film gives us a glance of Freed’ s days filled with eager young singers hanging outside the radio station attempting to “audition” for their big break as they sing popular songs of the day, or in a recording studio watching Frankie Ford record his one monster hit, “Sea Cruise”, or watching record producer Richard Perry play a fictitious music producer  working with a fictitious doo-wop group (The Planotones lead by Kenny Vance former of Jay and the Americans) recording “Come Go With Me”, a real hit by the Del-Vikings in 1957. The Planotones, as mentioned, started out as a fictitious group for the film. Some years later Vance would reform the group and they have been performing around the country singing doo-wop ever since.

The films real strength is in the performances with McIntire doing a splendid job as Freed and a young Fran Drescher who is engaging as Freed’s high pitched girl Friday. Also in the cast are Lorraine Newman as a Carole King songwriter wannabe and Jay Leno as Mookie, Freed’s chauffeur.  Most interesting are the performances by the great Chuck Berry, Jerry Lee Lewis and the other early rock and roll singers who appear along with the recreation of the Brooklyn Paramount Theater. “American Hot Wax” is a highly enjoyable low budget film. 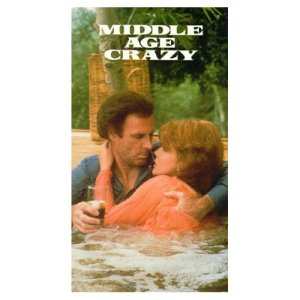 In “Middle Age Crazy”, Bobby Lee (Bruce Dern) is turning forty. It seems he can no longer take the pressure of being married to sex-loving Sue Ann (Ann-Margret), or that his college age son is dropping out, or his father dying or the pressure put upon him at his job. So Bobby Lee decides buy a new sports car and has an affair with a Dallas Cheerleader, to get away from all this pressure. Sue Ann, feeling rejected and abandon has an affair of her own. In the end, they finally decide to talk and jump into their hot tub fully clothed and make up. Credits roll. The problem, or should I say one of the problems, is that it is hard to feel sorry for Bobby Lee since, looking at the home he lives in, he obviously is making a good living. In addition, he has a beautiful wife who loves him and whose only fault seems to be is that she likes to have sex with him (she screams out “Bingo” every time she has an orgasm). Poor Bobby Lee, my heart goes out to him. The script attempts to make a point about entering middle age and the realization that life is passing you by however, it just comes off as dull and duller and in the end, nothing much happens.

Uninspired direction by Canadian John Trent keeps the pace slow, as does a TV of the movies script by Carl Kleinschmitt. The title song was written and sung by Jerry Lee Lewis.

The big question is how this film ever was made as a big budgeted feature and not as a movie of the week. Today it would be on the Lifetime channel. The cast is fine and it is good to see Bruce Dern play a regular guy for a change instead of a whacked out loser or a killer. Ann-Margret looks beautiful and does a nice job as the adoring Sue Ann as does Deborah Wakeham as Nancy, the Dallas Cheerleader, Dern hooks up with.

The film has not had a DVD release however, it was released on VHS years ago it is possible  it may be found at a video store that still rents them. “Middle Age Crazy” is worth a look if you like either Bruce Dern or Ann-Margret however, even their fans will have a tough time keeping focus.