My first exposure to Fred MacMurray was with his early 1960’s family oriented sit-com, My Three Sons. Fred was a sort of befuddled widower who brought up three boys with the help of a crusty father-in-law (William Frawley) and later on a great uncle (William Demerest). During these same years, MacMurray made a series of family oriented films for Walt Disney; Son of Blubber, The Absented Minded Professor and Bon Voyage among them.  The show, and these films, cemented an early image for me of MacMurray as a rather dull, and bland actor, a nice guy but uninteresting. In my defense, I have to add that at the time I knew very little about MacMurray’s earlier film career.

That would change the first time I watched Billy Wilder’s noir masterpiece, Double Indemnity. His Walter Neff was a classic noir sucker for a dame, willing to do dirty deeds for money and even more so for a seductive evil woman. Wilder once again brought out MacMurray’s dark side some years late in The Apartment where he played a sleazy corporate executive who used both women and men, in different ways, for his own salacious, adulterous  desires. These two films exposed me to a new side of Fred MacMurray; He still looked like the nice quiet guy who lives next door but now underneath that good guy exterior laid a dark character with immoral desires. END_OF_DOCUMENT_TOKEN_TO_BE_REPLACED 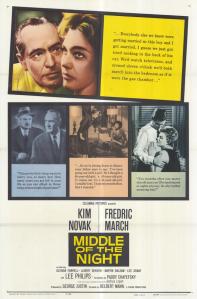 Middle of the Night is a story of a May/December romance. Written by Paddy Chayefsky and directed by Delbert Mann. Mann directed three films written by Cheyefsky, Marty, his first film which won Best Picture of the Year and Best Director awards, followed by The Bachelor Party and Middle of the Night. Later on Cheyefsky would write the screenplays for Network and The Hospital. He also adapted the William Bradford Huie novel, The Americanization of Emily for the screen.  Middle of the Night began as a TV episode on the anthology series “The Philco Television Playhouse”, starring E.G. Marshall and Eva Marie Saint. In 1956, Cheyefsky turned it into a play and it opened on Broadway with Edward G. Robinson as the older man and Gena Rowlands as the young woman. In 1959, the  movie version was released with Fredric March and Kim Novak in the roles.

Jerry (Fredric March), a 56 year old lonely widower, is a successful businessman in the garment district in New York and 24 year old Betty (Kim Novak) is working there as a receptionist and part-time model. Betty is newly divorced and uncertain about her future. The story centers on their romance and eventual decision to marry, the ups and downs in any relationship and specifically about one with a wide age difference. One of the more uncomfortable scenes is when Jerry meets Betty’s mother who it turns out is approximately the same age as he is. Later there is an even more painful confrontation with his family, which includes his daughter, a year younger than Betty, and his single over protective nagging sister. Everyone seems to have an opinion though the one thing everyone is in agreement on is that they are against the marriage. If all that is not enough there are the couples  own insecurities, Jerry’s jealousy when she talks to younger men or will she leave him in a few years? Betty anxieties are over her newly divorced husband, a musician who wants her back, and then there is her father fixation. In the end, despite all the objections from family and their own uncertainties they realize they love each other and maybe just maybe, they have a chance.

Fredric March is excellent as Jerry who at 56 feels that life has passed him by. Family and friends tell him that he should relax in his old age and take it easy. Jerry feels like everyone is ready to put him out to pasture until he starts dating Betty who makes him feel alive again. He tells everyone he’ll have enough time to take it easy when he’s dead! (Jerry would liked Warren Zevon’s song, I’ll Sleep When I’m Dead). You absolutely believe March in this role, the struggles and fears that he is facing at this particular junction in his life. Kim Novak also does a fine job as the young and insecure Betty whose father dumped his family when she was young. Conflicted about the breakup of her marriage she finds comfort and security with Jerry. She brings a nice vulnerability to Betty that makes her real. Throughout her career Novak has been underrated as an actress. She holds her own here with a magnificent cast that includes Lee Grant, Martin Balsam, Albert Dekker and Glenda Farrell. There are also some nice location scenes of New York’s garment district and other areas circa the late 1950’s.

One aspect that I found interesting is how old the actors look considering the age they are portraying. Fredric March who was 62 at the time portrays a man who is 56. Albert Dekker’s character was 59 ( he was 54 in real life), however both men look closer to being in their late 60’s maybe even in their 70’s. Compared to some of today’s actors equivalent in age like Dennis Quaid (55) or Jeff Bridges (59) or Harrison Ford (66) they looked much older than the ages they are portraying. Lifestyle? Healthier living? Whatever it is, people do look a lot young today than their counterparts of forty or fifty years ago.

Delbert Mann began his career during the Golden Age of Television drama. When people discussed directors from the Golden Age of Television who came to film in the late 50’s and early 60’s the names usually consist of John Frankenheimer, Sidney Lumet and Arthur Penn. Delbert Mann is rarely mentioned yet his filmography in those early years is pretty impressive. His debut film was Marty, which as previously mentioned won a few Oscars. That was followed by The Bachelor Party in 1957, Desire Under the Elms, Separate Tables, Middle of the Night and Dark at the Top of the Stairs. All of these were adaptations of stage plays except for Marty and The Bachelor Party. In the 1960’s Mann had success with two Doris Day comedies, That Touch of Mink and Lover Come Back. He made a few more films including Mister Buddwing and The Pink Jungle before going back to television in the 1970’s and 1980’s. While no auteur, Mann was a solid actor’s director and always told a good story. 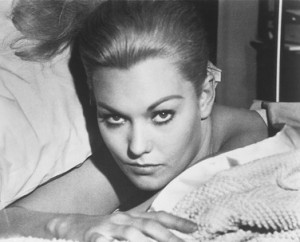 With Turner Classic Movies recent Kim Novak day as part of their Summer under the Stars Month, there have recently been a lot of articles reevaluating or just discussing her career. So having been a fan of Novak’s for years I’m throwing my two-cent in.

Underrated, surprisingly good.  You hear these terms a lot when critics discuss Kim Novak. She has always been underrated. Kim was surprisingly good in “Middle of the Night.” The question becomes if she is always considered underrated and is always surprisingly good how many films does it take before the surprise wears off.  The woman just never received the respect she deserves. What I want to know is when is the AFI going to do a tribute to her? With this year’s tribute to Warren Beatty and last year’s to Al Pacino, they seemed to have already moved on the next generation passing her by. She was a major star in her day working with many great directors and has appeared in quite a few films that most would consider classic. 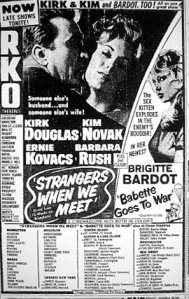 It is no secret that she was originally signed by Columbia Pictures as a Marilyn Monroe substitute. All the studios were looking for their own Marilyn. There was Jayne Mansfield, Sheree North and Mamie Van Doren, none achieved the level of success, nor did they have the magnetism of Marilyn. Kim was successful and had the star quality, without the cheapness of the Marilyn wannabes, and unlike Marilyn, Kim came across as a real woman. She was sensual, all you had to do was just look at her eyes and listen to her voice. She was certainly more attractive than the others were. Monroe never came across as authentic, someone that you could actually meet in the street whereas Kim was genuine. She was no fantasy figure. Kim was sexual without being obvious about it. Just watch her in “Pushover”, or “Strangers When We Meet.”

For someone who was suppose to be of limited talent she certainly attracted  some of the great directors of her time and she handled herself well under the guidance of Hitchcock in “Vertigo”, Preminger in “The Man with the Golden Arm” and Delbert Mann in “Middle of the Night.” With Richard Quine, she seemed to be exceptionally responsive. Just look at her performances in “Bell, Book and Candle” or “Strangers When We Meet.”  I have also enjoyed her performances in films like “Kiss Me Stupid”, “Boy’s Night Out” and “The Notorious Landlady.”

TCM’s recent all day Novak festival was a joy. While I have most of the films they showed, I finally got to record and will soon watch for the first time “Five Against the House.” I was also pleased to record “The Notorious Landlady” a particular favorite of mine being both a Novak and Jack Lemmon fan and not available on DVD, this was a must.

Novak retired from the movies in the early 1990’s and she hardly ever looked back. Making only rare appearances like the Larry King Show in 2004, where she still looked very good, otherwise Kim lives on her ranch with her husband and their many animals