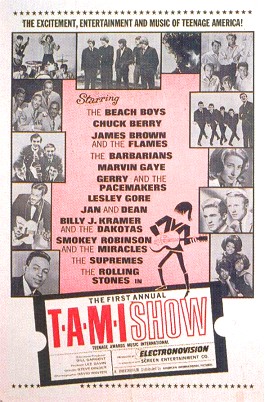 “The TAMI Show”, the first rock and roll concert film, was made only months after The Beatles invaded the Ed Sullivan Theater and claimed America. Filmed in a new process called “electronvision” (an early form of High Definition), “The TAMI Show” was shot at the Santa Monica Area in California over a two day period in 1964. Directed by Steve Binder who four years later would direct “Elvis’ ’68 Comeback Special.” The music director was Jack Nitzsche later one of the most influential music producers, arrangers, composers and session musicians in rock working with Phil Spector, The Rolling Stones,  Ry Cooder, Buffalo Springfield and most notably Neil Young. 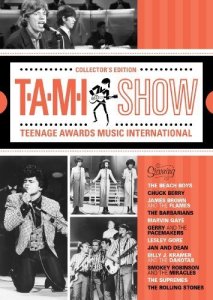 The performing artists are now mostly considered legendary, artists like the pioneering Chuck Berry (Johnny B. Goode, Sweet Little Sixteen) who every rock musician that followed owes a debt too. There was also Lesley Gore with songs like “It’s My Party”, and “You Don’t Own Me” the latter considered by some an early pre-feminist anthem. Motown was well represented with the great Smokey Robinson and the Miracles (You Really Got a Hold on Me, Mickey’s Monkey), Marvin Gaye (Hitch-Hitch, Pride and Joy) and The Supremes (Where Did Our Go, Baby Love). In 1964, with British groups controlling the American charts, The Beach Boys were just about the only American group to compete with songs like “Surfin’ USA” and “I Get Around”.  Soon after this film was made, Brain Wilson and the boys went into the studio to record their classic “Pet Sounds” album.  The British were represented by Billy J. Kramer and the Dakotas (“Bad to Me”, Little Children), Gerry and the Pacemakers (Don’t Let the Sun Catch You Crying, How Do You Do It) and the closing act, The Rolling Stones singing among others songs, “Time is On My Side”, “Around and Around”, “Off the Hook”  and  “It’s All Over Now.” In looking at the list of the songs performed, once again it must be noted the influence of the great Chuck Berry, whose music was performed not only by himself but also by Gerry and the Pacemakers (Maybellene), The Rolling Stones (Around and Around) and The Beach Boys with Surfin’ USA, where Brian Wilson blatantly ripped off Berry’s melody from “Sweet Little Sixteen.” (Berry eventually sued and would receive co-writing credit). 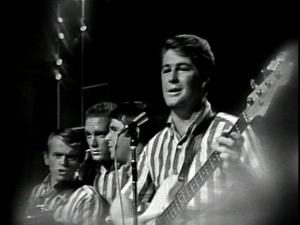 Just before the Stones appeared, the hardest working man in show business James Brown came on and blew everyone else away with hits like “Out of Sight”, “Prisoner of Love”, “Night Train” and “Please, Please, Please.”  Brown was a wild man, his music at the time considered too black for most white teens except the most hip. His fusion of soul and rock and roll plus his extraordinary energy and dance moves are now legendary. For many white kids this film was their first exposure to James Brown, as it was for Brown his first major exposure to an almost all white audience. Brown’s performance was the highlight of one of the greatest Rock and Roll concert movies ever, and the act chosen to follow Brown would suffer by comparison. The task fell to The Rolling Stones. After seeing Brown rehearse earlier in the day, The Stones were nervous, how in the hell were they going to follow him. There was talk about them going on earlier and letting Brown be the final act. Ultimately, that did not happen. Keith Richards later said following Brown was one of the biggest mistakes in their then young career. Mick Jagger tried to compensate the best his could prancing around like a rooster, doing splits and other spastic moves. The teenager girls were hysterically screaming however performance wise Brown had stolen the show. 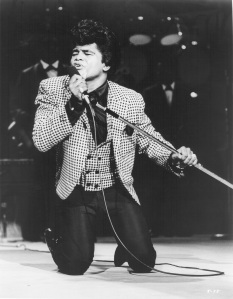 The concert was hosted by the pop duo Jan and Dean who broke out in the late 1950’s with a single called “Baby Talk” but really hit their stride as part of the surf music craze with songs like “Linda”, “Sidewalk Surfin’” and “The Little Old Lady from Pasadena.”  They and The Barbarians (Hey Little Bird) are arguably the weakest links in the film. On stage with the performers were numerous go-go dancers decorating the “mod” set. The energetic dancers included then unknowns like actress Terri Garr and chorographer Toni Basil.  The backup band for most of the artists included Leon Russell and Glen Campbell. The backup singers were The Blossoms who included Darlene Love later lead singer of such Phil Spector productions like “He’s a Rebel” and “He’s Sure the Boy I Love.” (Though billed as The Crystals it was really Love and the other Blossoms backing her up). 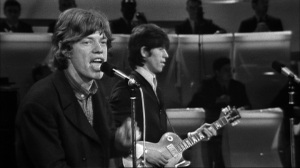 T.A.M.I. is an acronym standing for the “Teenage Awards Music International” or “The Teen Age Music International.” According the Wikipedia, the two were inconsistently used in advertising. The film has been among the missing since its release in December 1964. When the video revolution started in the late 1970’s a quasi-legal copy of the film was released on VHS and was sold in stores like the RKO Warner Video Store that was located on the southeast corner of 49th Street and Broadway in NYC. The store may have been under another name at the time, either way; the tape was soon pulled off the market due to multiple legal entanglements and has not been available on home video since except for bootlegs. About ten years ago, Dick Clark decided to put some money and time into getting the multiple legal entanglements straighten out with the goal to have a home video release. It took just about ten years to accomplish this feat. Thanks to DC the film is now available for the first time in its full-length version on DVD.