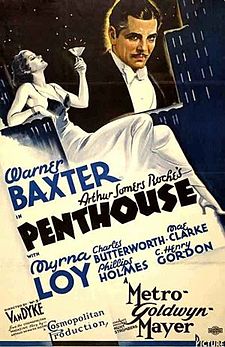 Poor Mae Clarke, she always seems to get the sour end of the lollipop when it came to men. Cagney shoves a grapefruit in her face in THE PUBLIC ENEMY. Two years later in the 1933 film, LADY KILLER, Jimmy drags her by her hair and kicks her out of his apartment. That same year in “Penthouse” poor Mae is dumped for a high society dame by her new love, Phillip Holmes and soon after is shot dead. The dame just can’t get a break!

But I am getting ahead of the story. We first meet Jack Durant (Warner Baxter), a hot shot lawyer for a big time law firm, who likes to moonlight working for underworld clients like hoodlum boss Tony Gozotti (Nat Pendleton) who he saves from jail and the death penalty. The problem is Durant’s law firm does not like the idea of his defending hoodlums. Jack, on the other hand, like the edginess of dealing with these types of clients as well as the nightlife and the women that come with it. END_OF_DOCUMENT_TOKEN_TO_BE_REPLACED 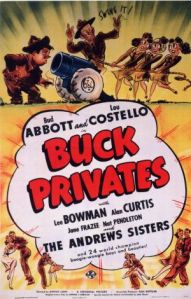 I grew up watching Abbott and Costello movies on WOR-TV channel 9, then an independent station in the New York City area. Every weekend one of the legendary team’s movies would be on and I would be glued to the TV set. Additionally, there was the Abbott and Costello Show which aired every weekday afternoon on WPIX Channel 11 just before or right after, I don’t remember which, The Three Stooges with Officer Joe Bolton doing the hosting. As a team Abbott and Costello made over thirty films, eight in two years! I’ve seen everyone,  multiple times, some too many times to even remember. Along with “Abbott and Costello Meet Frankenstein” and “Hold That Ghost,” one of my favorites is “Buck Privates,” their second film together. The film was released in February 1941, the U.S. was only months away from entering World War II which was already raging in Europe. The comedy duo would soon be among the top box office attractions during the war and were the number one box office attraction in 1942.

Bud and Lou outlasted many of their contemporaries as they moved from Burlesque to Vaudeville to Movies, Radio and finally Television, successful in each and every medium. They first performed together as a team at the Eltinge Theater on 42nd street in New York City which was located in what is now the lobby of the AMC Empire 25. END_OF_DOCUMENT_TOKEN_TO_BE_REPLACED