Released earlier this month, The Real James Dean: Intimate Memories from Those Who Knew Him Best is a collection of previously published articles written by Dean’s family, friends, co-workers and professional contemporaries, in other words, by those who really knew the rebel icon. Many of the articles have been unavailable since they were first published, some as far back as more than sixty years ago. They cover his entire short life from his childhood days in Indiana until his untimely death on September 30, 1955 at the age of twenty-four. Edited by Peter. L. Winkler (Dennis Hopper: The Wild Ride of a Hollywood Rebel)  the book reveals an individual of complexity, admired by some and despised by others, but always fascinating. END_OF_DOCUMENT_TOKEN_TO_BE_REPLACED

This is part two of my conversation with author Peter L. Winkler whose new book, “Dennis Hopper: The Wild Ride of a Hollywood Rebel” is now available. The book brings you inside the world of one of cinema’s most beguiling characters. For part one of this interview click here. 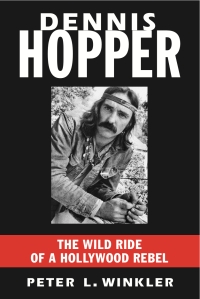 John: And that leads to “The Last Movie” which I guess there could have been a good movie there, I have not seen it, but it seems to be just a film where Hopper was just out of control. I know it won an award at the Venice Film Festival but it just got ravaged by every critic at the time.

Peter: Dear reader, I have suffered for you, you need not suffer, I have seen the film three times so you don’t have to!

Peter: Universal actually put out a VHS video tape of “The Last Movie” in 1993, unfortunately, not letterboxed but panned and scanned. You can find used copies at Amazon.com if you’re interested. The movie’s flaws were not the result of Hopper’s alcohol and drug consumption. The script for “The Last Movie” was written in 1965 by Hopper’s friend, Stewart Stern, based on an idea Hopper had. It was going to be Hopper’s first directorial effort before “Easy Rider,” but in 1965 nobody was interested in anything Hopper had to say or offer as a project. As he said, “I was looked on as a maniac and an idiot and a fool and a drunkard,” so it had to wait until after “Easy Rider.” After “Easy Rider,” Hopper had the clout to get the film made. As long as he stayed on schedule and within the budget, Universal Pictures gave Hopper creative carte blanche. He even had control over the final cut. Away from Hollywood, away from any executive supervision, Hopper was able to do what he planned to do on “Easy Rider” but wasn’t allowed to. He went down to Peru and the first thing he did was practically throw away Stern’s script. Hopper improvised the film’s action and dialogue on location. Hopper came to the set every day, the script suggested some ideas, from that he would come up with his own. If something occurred to him on the spot they would shoot it. But I don’t think there was, surprisingly, a lack of discipline, because the movie was shot in about three months, and it was made within budget, which was about $850,000. I don’t think Hopper’s creative decisions were adversely affected by his drug intake. Brooke Hayward said, “Dennis is a demonic artist, like Rimbaud. Nothing matters but his work.” Paul Lewis, who produced “The Last Movie,” said, “We weren’t doing anything that interfered with what we thought was our work. So, like, you know, it was always the work. The work was the most important thing, and the drugs and the alcohol and all those things are secondary to it.” Hopper made exactly the film he wanted to make. Hopper improvised and gave the film a non-linear structure in the editing room, along with cinematic devices like starting the film with a countdown leader and inserting title cards saying “Scene Missing,” which rubbed the viewer’s nose in the fact that it’s a movie, everything’s artificial, nothing in a film is real, you’re watching actors, you’re not watching characters, which of course robs the viewer of any sense of involvement with the characters in the film. This was the one film he directed where he got to do exactly what he wanted to do. If the film is ever released on DVD, it should be of interest to people who are interested in Hopper’s career because here, if you will, is the pure Hopper. END_OF_DOCUMENT_TOKEN_TO_BE_REPLACED 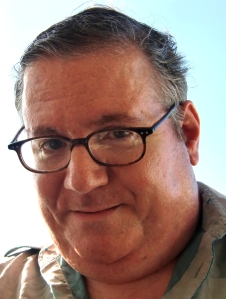 Peter L. Winkler’s new biography, “Dennis Hopper: The Wild Ride of a Hollywood Rebel” is just that, a wild, informative, thrilling, readable ride of an iconic life that was constantly evolving. The book is as colorful as its subject. Peter is a film historian who has written for a variety of publications, including Cinefan, Filmfax, Crimemagazine.com, Playboy, and Video Theater. This is Part One of our phone conversation that took place on October 12th.

John:  Is this your first book?

John:  Would you tell us a little about your professional background?

Peter:  I attended the University of California, Los Angeles (UCLA) from 1974–1978. I graduated in 1978, receiving a Bachelor of Arts in History with academic honors. Then I entered law school, the last refuge for liberal arts majors who don’t know what to do next. The rheumatoid arthritis that afflicted when I was nine years old became much worse, and I was stricken with secondary Sjogren’s Syndrome, which became disabling. I didn’t practice law. I didn’t do much of anything, so I figured, well, you know, I was always a good academic writer, so I thought maybe I had what it took to be a professional writer. I purchased my first computer in 1985, a laptop; I’ve owned nothing but laptops, because it’s hard for me to sit at desks for long periods. I sold the first article I wrote, which was good beginners luck.

John:  So you did all your own research?

Paul:  I did my own research. I did everything except crank the printing press and bind the pages. I wrote my own dusk jacket copy, procured the blurbs, I did it all, and here it is!

John:  What made you decide on or should I say select Dennis Hopper as a subject?

Peter:  You interviewed Patrick McGilligan, who blurbed my book. In 1997 he gave an interview to a website called Beatrice, which has a lot of very good author interviews archived there, and they asked him the same question. What draws you to a certain subject and he said, “The honest answer is always the contract. There’s a dishonest answer: ‘The subject is personally fascinating and has a deep personal subtext for me . . .’ ” After striking out with a book proposal for a biography of actor Nick Adams, I decided next time out, I am going to find a biographical subject where lack of name recognition is certainly not a problem. Dennis Hopper is an iconic or near iconic figure in film and there should be no problem there. He led a very rich and eventful life which was quite colorful. He was quite the character himself. So I figure it was something I could probably sell, it’s marketable, and it turned out that it was, of course. END_OF_DOCUMENT_TOKEN_TO_BE_REPLACED