Nothing seems to make sense in “Kiss Me Deadly,” even the opening credits roll backwards. Author Mickey Spillane hated the movie, screenwriter AI Bezzerides hated the book and film goers back in 1955 must have been confused with what it was they were exactly looking at. Sure there was a P.I. and plenty of hot looking dames with legs that went from one end of the screen to the other but, this is the 1950’s, the time of The BOMB, we’re not just dealing with dope here, this time it’s serious.

Ralph Meeker’s Mike Hammer may just be the dumbest P.I. to ever grace the screen, still director Robert Aldrich gives us one of the great film noirs of all time with a touch of science fiction tossed in just for good measure. It’s violent, sexy, nasty, and one of a kind. The film’s ending is one of those, to use an antiquated 1960’s term, mind blowing, one of the great film endings that will stay with you long after the film is over. Meeker is perfect as the thuggish Mike Hammer, a bedroom dick, who is not beyond letting his secretary/ lover, Velda (Maxine Cooper) have sex with someone just to gain information on the case. END_OF_DOCUMENT_TOKEN_TO_BE_REPLACED

TCM is showing this film at noon today so I thought I would feature my review from a while back. Below is the link. 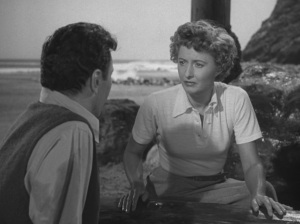 “Jeopardy” is a terrific little thriller from MGM, cheaply made, did okay at the box office and disappeared without much fanfare. MGM known for its lavish and expensive musicals also had a small unit that produced low budget films, programmers, product to keep pumping out to theaters. With a small budget and stars who were no longer at the top of their career the studio was able to put out some decent films that turned a profit. “Jeopardy” falls nicely into this category.

A typical American family is driving down to Mexico for a vacation. Let’s remember this is 1953, post-war America, the Eisenhower years, folks were glad the war years were over and enjoying the open roads, the country’s super highways. Barbara Stanwyck’s narration in the film alludes to this as well as to the unknown trouble that lies ahead.  The destination is an isolated beach area her husband, Doug Stilwin (Barry Sullivan) went fishing there years ago with former Army buddies.  The rest of  the family consists of wife Helen (Barbara Stanwyck) and their young son Bobby (Lee Aaker).

The first stop is Tijuana but from there it is a long ride to the isolated beach some 400 miles south on the Baja peninsula. When they first arrive young Bobby goes exploring on a pier that has been condemned (only the condemned sign is in Spanish and we do not find out the meaning of the word until it is too late). Bobby gets his foot stuck in between two boards and Dad has to go out on the pier and pry his son’s foot loose. On the way back one of the weaker boards gives way and Dad falls, a piling pinning his foot underneath. Unable to get him loose and with the tide beginning to come in, Helen, panic stricken, is forced to take the car and go for help hopefully getting back before the tide comes in drowning Doug.

Not knowing any Spanish, unfamiliar with the terrain and half hysterical Helen drives wildly searching for help. She meets some locals walking down the road but the language barrier prohibits any communication and she drives off frantically still in search of help.  She comes upon a roadside gas station but the place seems deserted. She breaks in looking for a heavy rope or some other material that would help free her husband.  Suddenly, a man appears standing by her car, he’s an American and she tells him her tale. He instantly agrees to help her; they jump into her car and take off. As they drive away, the camera,remaining behind at the gas station, slowly moves over revealing a dead body lying on the ground. The supposed good Samaritan is Lawson (Ralph Meeker) a half psychotic escaped prisoner.  He isn’t interested in helping Helen and her husband as much as using the car to get away from the Mexican police. To make Helen’s situation even more desperate he finds a pistol in the glove compartment, one Helen’s husband packed for shooting practice.

The remainder of this short (69 minutes) film becomes a duel between Helen, a woman determined and willing to do anything to save her husband and the crazed Lawson (the film hints that she agrees to a sexual encounter), who mocking her fears that her husband may die at one point tells her to “stop it, you’re making me cry, I’m a very sensitive guy.”

Stanwyck is always at her best when she combines vulnerability and toughness which she does so well here, but the real revelation is Ralph Meeker (who incidentally replaced Brando in “A Streetcar Named Desire” on Broadway). Best known as Mike Hammer in the classic Robert Aldrich film “Kiss Me, Deadly,” here he just about steals the entire film in what has to be one of his best and juiciest roles. It was a good year for Meeker, he also had a role in Anthony Mann’s “The Naked Spur.”

As exciting as Meeker is in his role, Barry Sullivan is just as dull. He has the less fortunate part of the husband who for most of the film is stuck under the pile with the tide coming in, the waves crashing up against him harder and harder. Actually it is not so much Sullivan’s talent that is at fault as it is the role itself.  Lee Aaker who plays the young son Bobby is best remembered by baby boomers as Rusty in the TV series “The Adventures of Rin Tin Tin” that began filming the following year and ran for five years.

Though the film was set in Mexico, the Yucca Valley and an area near Laguna Beach were substituted for the Baja Peninsula. The screenplay was written by Mel Dinelli who wrote such fine thrillers as “The Spiral Staircase,” “Cause for Alarm,” “The Window” and “Beware, My Lovely.” Directed by John Sturges on a very small budget,  He would within two years go on to make his first great classic, “Bad Day at Black Rock.”

Notice in both the poster and the insert how in the advertising of this film they allude to Stanwyck’s character having sex with the killer Lawson with phrases like “she did it…because her fear was greater than her shame!”  and “she did it…and no woman in the world would blame her”

“Jeopardy” is a fine thriller without ever reaching the level of greatness, but you will not be bored.