If ones idea of a horror film is a madman’s unrelenting attacks on young girls with plenty of blood and guts spilling out then “Magic” directed by Richard Attenborough will be sure to disappoint.  Screenwriter William Goldman and director Attenborough take a more serious, quiet and psychological approach to madness. The horror is in the terror of watching a personality crumble, split apart, ruining not only his life but others who he comes into contact with.

Corky Withers magic act is a flop until he hits on the idea of adding a ventriloquist dummy named Fats to his act. We first hear Fats voice heckling Corky from the rear of the audience, the wilder Fats responds the more the audience eats up the act. Corky is soon on the verge of signing a network TV contract thanks to his manager Ben Greene (Burgess Meredith) however, Corky is getting cold feet, or is it something else that will not make him sign the contract.  You see one of the stipulations of the contract is Corky must succumb to a “routine” psychical which he refuses to do. He instead flees to upstate New York where he grew up; there he comes upon Peggy Ann Snow (Ann-Margret), the woman of his dreams during his high school years, now the aging wife of philandering former ballplayer “Duke” (Ed Lauter) who is away on a hunting trip. They get reacquainted and soon fall into bed together.  They talk of packing up and leaving. Corky prefers to do this before old Duke comes home while Peggy feels somewhat obligated to inform Duke that she is leaving even though their marriage has been on the down side for some time.

Corky’s breakdown continues to slide downhill as the film progresses with Fats seemingly taking over and being in charge. Fats face eerie becoming more demonic as the film progresses.  This leads to the death of Ben Greene when he shows up to take Corky back to the city and get him some psychiatric help.  There is an interesting scene just before Ben’s demise where he attempts to get Corky to put Fats down and make him not communicate via Fats for just five minutes. Corky tries to convince Ben, and himself, that this “experiment” is ridiculous but we see the tenseness and sweat building on Corky’s face as the minutes tick by. He cannot do it.

One must keep in mind the horror in all in Corky’s head, this is no “Chucky” filled with voodoo rituals or a Zuni doll (1975 TVM Trilogy of Terror) coming to life with some nasty teeth. As I mentioned, the horror is all in Corky’s unstable mind. 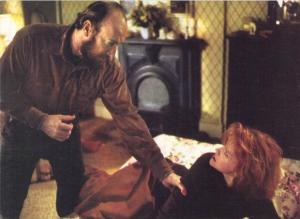 A young Anthony Hopkins plays the personality challenged schizophrenic ventriloquist Corky, with a very charming Ann-Margret as his former high school crush, now an unhappily married woman. Hopkins also was the creepy piercing voice of Fats which was quite a contrast from the dull Corky.  Burgess Meredith as Ben Greene who unfortunately is killed off too early in the story also does a fine job. The film is aided by the fine eerie cinematography of Victor Kemper whose vision fits the cold winter air and the dark eerie atmosphere that prevails throughout the second half of the film and the music of Jerry Goldsmith. For director Richard Attenborough, this was a different type of project to tackle than what you would expect from the director of “Gandhi” and “Oh, What a Lovely War.”

The idea of menacing ventriloquist dummies has been used before as far back as 1925 in the silent Tod Browning classic “The Unholy Three” with Lon Chaney, remade in 1930 as a talkie, again with Chaney in his final film, also in the excellent horror anthology film “Dead of Night” and again in one of the most memorable “Twilight Zone” episodes, “The Dummy.”,  In 1976, novelist and screenwriter William Goldman felt there was still some life in the story and wrote what would become a bestselling novel called “Magic.” Two years later 20th Century Fox released a film version from a screenplay by Goldman.

“Magic” is not a great film but it seems to have fallen under the radar and should not be. Yes, there are some plot holes and it would not rank high on the “gore” meter still just look at the photo of Fats above and you have to admit that is one scary looking dummy.