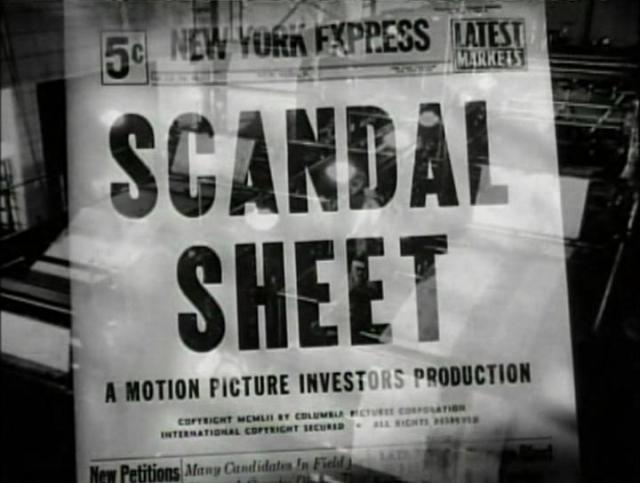 Directed as if he were holding a sharp knife to the gut, “Scandal Sheet” was the first in a series of noirish crime films made by Phil Karlson in the 1950’s. Based on a novel (The Dark Page) by filmmaker Sam Fuller with a screenplay by Ted Shedeman, Eugene Ling and James Poe, “Scandal Sheet” moves along at a speedy pace throughout its 88 minute running time. Karlson’s dark world is aided nicely by cinematographer Burnett Guffey who manages to make the studio bound sets feel like the dirty grit of the big city.

Once a respectable New York City newspaper, but with a falling circulation, relentless editor Mark Chapman (Broderick Crawford) was brought in to turn the paper into a tabloid seeking sensationalistic rag exploiting the helpless victims of crimes. In return, he has more than doubled the papers’ circulation satisfying the majority of the newspaper’s board members. Crawford is intensely uncompromising as Chapman, a cynical man who has escaped from a previously secret life some twenty years earlier. Like many noir anti-heroes though, his past comes back to haunt him. In this case, it’s his wife. END_OF_DOCUMENT_TOKEN_TO_BE_REPLACED

This is the fourth of seven entries I am writing for the Musical Countdown being hosted by WONDERS IN THE DARK. Here is the link.