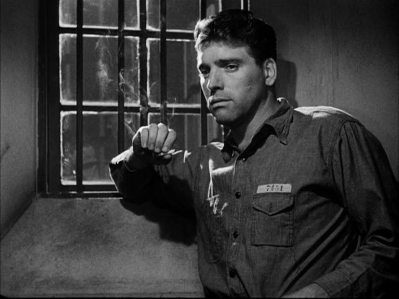 Jules Dassin’s Brute Force is a brutally, cruel, claustrophobic prison film that will turn your knuckles bloody to the skin. This was the director’s first venture into the world of film noir. It has a tough hard core texture, thanks to not only Dassin’s sharp direction, but the cinematography of William H. Daniels (The Naked City, Lured) and the music score of Miklós Rózsa (Ministry of Fear, Woman in Hiding). END_OF_DOCUMENT_TOKEN_TO_BE_REPLACED 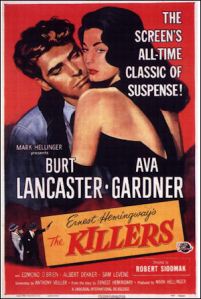 “The Killers” is a hard-boiled film noir that starred an unknown 32-year actor making his film debut and a contract player from MGM, of limited talent, with little in her filmography at that point in time, to prove she would amount to anything.  “The Killers” is intricate and visually stunning with its black blacks and pure white whites. Just take a look at the opening scene when the two killers arrive in town, the film is a dark fatalistic work of photographic beauty, a visual feast of light, darkness and shadows. Credit goes to director Robert Siodmak and cinematographer Elwood “Woody” Bredell. The opening is also enhanced by Miklos Rozsa’s music, which may sound familiar to some who remember the theme from the old TV police show “Dragnet.”

Ernest Hemingway’s short story “The Killers”, written in a hotel room in Madrid sometime in 1926, first appeared in Scribner’s Magazine in March 1927. The story is characteristic of themes that would continue to emerge in Hemingway’s work, the inescapability of death and the emptiness of life.  Producer, newspaper columnist and theater critic, Mark Hellinger purchased the film rights for $36,750.  Hemingway’s story is about two killers who come to the small town of Summit, Ill. (changed to Brentwood, New Jersey in the movie), looking for a man known as The Swede. Why is never said. Most of the short story takes place in Henry’s Diner where The Swede is known to come for dinner most nights. Hemingway’s story ends after Nick Adams, Hemingway perennial character, and a customer in the diner at the same time the two killers show up and announce they are going to kill The Swede, sneaks out to warn him of the two men out to kill him. The Swedes’ fatalistic resolve that there is nowhere left to run, to just remain where he is, accepting the consequences is where the short story ends. It leaves open a multitude of questions. What did The Swede do that these two guys want to kill him. Who hired them? Why has The Swede given up running readily accepting his doomed fate? END_OF_DOCUMENT_TOKEN_TO_BE_REPLACED