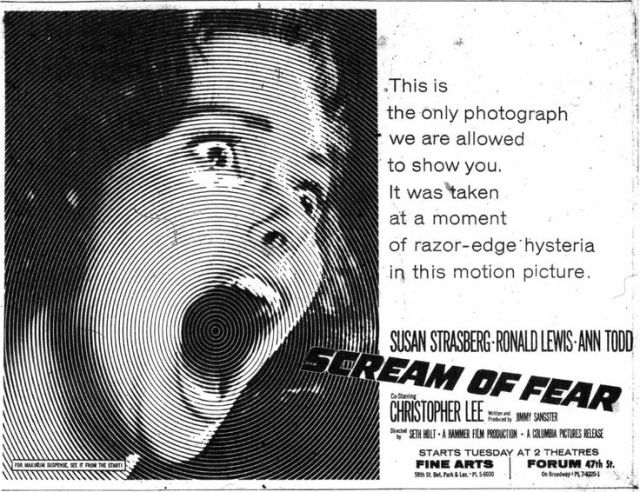 Hammer studio was known for reinvigorating the horror film with its revisionist versions of Universal icons Frankenstein and Dracula along with providing a gaggle of sexy semi-dressed female vampires. But Hammer was more than just horror. The studio also made a series of suspense/crime films one of which is the 1961 thriller, “Scream of Fear.” Directed by Seth Holt with a script by Hammer main stay Jimmy Sangster the film contains its share of shocks closer in style to a Hitchcockian suspense thriller than Hammer’s better known blend of monsters and vampires. I first watched this eerie atmospheric film years ago on a beat up rented VHS tape and finally got to watch it again recently thanks to a copy I found at a local library. (1)

The film opens with a prologue prior to the opening credits. It takes place in Switzerland; the police dragging a lake for a body, a woman is soon found and identified as Emily Frencham.  We later find out she was traveling with  her friend Penny Appleby (Susan Strasberg), together on vacation, when Emily, for reasons never explained, left her hotel during the night and ended up dead in  the lake.  Sometime later we meet Penny, a wheelchair bound young woman who returns, for the first time in ten years, to the creepy looking villa of her father on the French Riviera. Her father left England years ago moving to France after divorcing Penny’s mother. After her mother’s recent death and with her father remarried to a woman named Jane (Ann Todd), Penny comes to France meeting her step mother for the first time. END_OF_DOCUMENT_TOKEN_TO_BE_REPLACED 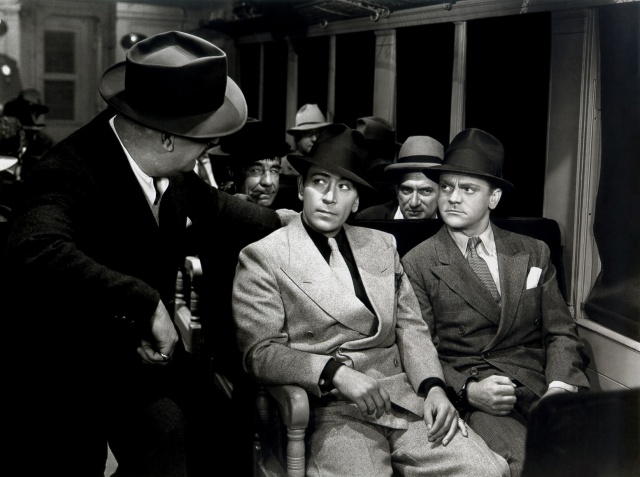 Each Dawn I Die (***1/2) It is Cagney versus Raft in this classic 1939 Warner Brothers prison drama. Directed by William Keighley, Cagney is Frank Ross an investigative reporter who exposes a political candidate’s corrupt association with a construction company. After the article is published, Ross is snatched by some goons right in front of the newspaper building. He’s knocked out, soused with alcohol and tossed into a speeding car resulting in a car accident which kills three innocent people. Framed for the murders, Ross is sent to prison where he meets big shot Stacey (George Raft). At first, they get off on the wrong foot with Ross continuing to claim he was framed and innocent, all falling on deaf ears. The two become pals when Ross saves Stacey’s life from an attempt by another prisoner to kill him. END_OF_DOCUMENT_TOKEN_TO_BE_REPLACED