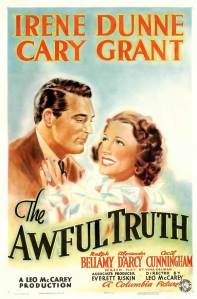 Along with Howard Hawks and Preston Sturges, Leo McCarey arguably epitomizes the art of the screwball comedy. Of course other filmmakers have dabbled in screwball with winning results like William Wellman (Nothing Sacred),  Gregory La Cava (My Man Godfrey), Mitchell Leisen (Easy Living) among others but these three men combined made some of the cleverest and funniest works of that period.

Made in 1937, “The Awful Truth” is one of the gems of this, for lack of a better term, sub-genre. Nominated for Best Picture, Leo McCarey managed to snag the Best Director award though the film lost to the more “important” and “esteemed” winner, “The Life of Emile Zola.”  Based on a play by Arthur Richard with an Oscar nominated screenplay by Vina Delmar, though it is said Dorothy Parker had much to do with the script. END_OF_DOCUMENT_TOKEN_TO_BE_REPLACED