Comedy films of the 1940’s were a fairly diverse group from social commentary, satire to slapstick. From the sophistication of Ernest Lubitsch to vaudeville based films of Abbott and Costello. I love it all. Abbott and Costello narrowly missed the list, as did so many others.  The 1940’s  was a rich period for comedy in films.  It wasn’t easy narrowing the list down to just ten. This is the fourth post in the series. You can read about them here. END_OF_DOCUMENT_TOKEN_TO_BE_REPLACED

….Bob Hope that is in this double feature review of two of his best. 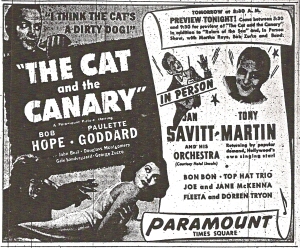 These two films, relatively early in Bob Hope’s film career and made only a year apart are similar in storyline yet show a growth in Hope’s screen persona that would cement his career for the next forty or so years.

The story of “The Cat and the Canary” has a long history dating back to a 1922 play written by John Willard. In 1927 Universal made a silent version. As directed by German Expressionist Paul Leni and starring Laura LaPlante the film is a moody, expressionistic work. Unlike most filmed plays of the time, Leni made this a visual delight. In 1930, Universal made an early sound version retitling it “The Cat Creeps.” Unfortunately, this film which predates Universal’s classic horrors is presumed lost with only clips remaining (despite someone’s claim, and a number of votes on IMDB to have seen the film. They may have it confused with a 1946 film with the same title.) 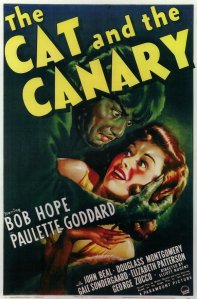 In 1939, Paramount purchased the rights from Universal and resurrected the story again for Bob Hope turning it into an old dark house thriller with laughs. This film which is finally seeing the light of day on DVD is one of Hope’s best. The script was rewritten tailored to Hope’s talent adding his now well known style for wise cracks yet retains the original thrills of the original.

No matter what version you look at, the plot is the same with only minor changes. Family members and friends are summoned to an old dark house in the Louisiana Bayou, owned by the deceased Cyrus Norman for the reading of his will (specified to be read at midnight ten years after his death). Of course, there is no way off the island until the next morning. Also on board is a housekeeper (Gale Sondergaard) who would give Mrs. Danvers a fright along with secret passageways, hidden treasures, greedy relatives’ lights that mysteriously go on and off, a killer on the loose and plenty of eerie atmospheres. The Louisiana Bayou setting also adds to the sinister surroundings.

Paulette Goddard as Joyce Norman is both the fortunate and unfortunate inheritor of the estate. Hope is Wally Campbell, a ham actor and childhood friend of Joyce who helps her solve the strange goings on and saves her life. George Zucco plays Crosby the lawyer who does not make it through the night and Gale Sondergaard is the creepy housekeeper that assist in keeping the atmosphere sinister and also adding some comic fodder to the proceedings.  John Beal, Elizabeth Patterson and Douglass Montgomery fill out a fine cast.

Hope’s screen persona is just beginning to be evolve, his wicked wise cracking style was developed here for use in this film (“don’t empty houses scare you” he’s asked. “Not me, I worked in Vaudeville!”). Still, he is a bit more laid back and while cowardly it is not as prevalent at it would become later on just one year later in the first Hope/Crosby Road film and the second Hope/Goddard pairing in “The Ghost Breakers.”

If anything this second 1940 feature is spookier and funnier than the first pairing of Hope and Goddard. Again it is Goddard who inherits a spooky mansion, this time on a small bleak island just off the Cuban coast. Hope plays Lawrence L. Lawrence (the middle initial stands for Lawrence. As he says “My parents had no imagination.”). This time he is a radio broadcaster who mistakenly believes he shot and killed a close associate of a local gangster. This gives Larry purpose to stow away on the same ship Ms. Goddard’s character is leaving on. Goddard is warned that her life may be in danger if she continues on to the “haunted house.”

As in “The Cat and the Canary”, the film is filled with hands that reach out from behind secret panels, trap doors, sinister individuals, ghosts and a murder. The film provides a nice mixture of “old house” style horror, mystery and comedy, Hope style.

Black actor Willie Best is Hope’s servant and side kick and unfortunately, like in many films from this period the racial stereotyping is embarrassing and politically incorrect, however this takes nothing ways from Willie’s performance. John Beal, Elizabeth Patterson and Douglass Montgomery fill out a fine cast.

One other reason that these two films work so well is the distinctively eerie camerawork by Charles Lang whose excellent cinematography graced both of these films. Lang’s long career included such great movies as “The Big Heat, “The Uninvited’, “Ace in the Hole” and “Wait Until Dark” among many others.

After working with Goddard for the first time, Hope got to meet his idol, and Goddard’s husband, Charlie Chaplin. During the filming of “The Cat and the Canary”, Chaplin would watch the rushes every night and said to Hope one day that “you are one of the best timers I’ve ever seen.” Hope was obviously enthralled.

Together these two films make a great double feature. Hope was just entering the best period of film career which by the 1960’s would sadly deteriorate to films that were just plain embarrassing. If you are familiar with Bob Hope only from such late career horrors like “I’ll Take Sweden” or “Boy, Did I Get A Wrong Number” give his forties and fifties filmography a try. You will see a comic actor at the top of his game and understand why Woody Allen considers him such an influence. The Woody Allen character is cowardly and a womanizer, at least in his own mind, traits he borrowed straight from Hope. You see this especially in his early films like “Bananas”, “Sleeper” and even in “Annie Hall.”