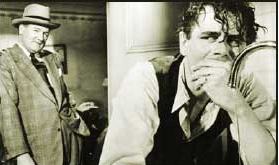 Glenn Ford is no stranger to the dark streets of film noir, he’s walked them many times before, in “Gilda”, “The Big Heat” and “Human Desire.” In Joseph H. Lewis’ 1949 film, “The Undercover Man,” a low rent though first-class crime drama filmed in a semi-documentary nourish style. Treasury Agent Frank Warren (Glenn Ford) who is out to bring down the gangland syndicate leader known only as “The Big Fellow” leads a criminal investigation. It would sound ludicrous if it were not true that the IRS brought to justice real life gangster Al Capone, whose story this film tells a fictionalize version of. Based on a Collier’s magazine article called “Undercover Man: He Trapped Capone” by Frank Wilson, it tells the story of how the federal government finally caught Al Capone on income tax evasion.  The screenplay is credited to Sidney Boehm and Jack Rubin, though independent producer Robert Rossen is said to have had a say in the script.  Boehm would go on to write many noir films including “The Big Heat”, “Violent Saturday”, “Mystery Street” and “Side Street.”

Burnett Guffey’s gritty dark lit cinematography is filled with murky overcrowded city streets, dark movie theaters and seedy hotel rooms not fit for a two-dollar hooker but good enough for federal enforcement officers to shack up in during the investigation. It is a dark dingy world filled with squealers, bookies and murderers. In this part of town, the bookies are dropping dead, quicker than flies attacked by a blast of bug spray.

Glenn Ford is a dour actor who barely breaks a smile here until the film’s ending. His government agent is at times tormented, driven, paranoid and almost beaten. He’s prepared to give up his job, until the mother of slain bookie Salvatore Rocco, hands over her son’s books, and tells him how she and many others came to America to get away from the Mafia in Italy, and how thanks to brave men like him, she and others no longer have to live in fear. The woman’s story brings tears to Agent Warren’s eyes and he decides stay on the case. Joseph H. Lewis states in an interview with Peter Bogdanovich that this scene was shot in one take using three cameras. He felt it was the only way he could capture the realistic emotions as portrayed by the actors. Nina Foch, who would have the lead role in Lewis’ “My Name is Julia Ross” is Judith, Warren’s wife. While she has some nice moments, Foch is generally wasted in a role that is of minor importance to the film. James Whitmore is on hand, in his film debut, as fellow T-Man George Pappas.

Lewis spent most of his career in the bargain basement department of filmmakers, though he proved himself a master of camera placement with some of the most unconventional shots to come out of poverty row. He was given the name “Wagon Wheels Joe” after he did one low budget oater that had more cowboys than actors in the cast. Since they could barely read their lines, Lewis, in order to distract the audience from the lack of talent, shot a scene with the camera looking through a wagon wheel. The shot was considered so artistic; it gave Lewis a reputation for placing his camera at unusual angles. 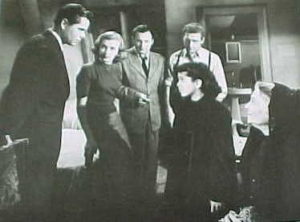 While “The Undercover Man” was a second feature, it had a budget of about one million dollars and turned out to be the film on the double bill everyone wanted to see. Lewis’ noir films like the aforementioned “My Name is Julia Ross”, along with “So Dark the Night”, “Gun Crazy” and “The Big Combo” are required viewing for any serious film enthusiast.. Along with his noir work, Lewis’ filmography consisted of westerns, generally starring Bob Baker or Johnny Mack Brown. In the 1950’s he made two westerns with Randolph Scott however, his oddest western was the 1958 film “Terror in a Texas Town”, that opens with Sterling Hayden walking down the town street carrying a harpoon! There were war films like “Retreat Hell,” films of intrigue and even the East Side Kids in Poverty Row stuff like “Boys of the City”, “Pride of the Bowery” and “That Gang of Mine.” In the 1960’s, Lewis spent the final days of his career in television doing mostly western series like “The Rifleman”,  “Bonanza”, “Gunsmoke” and “The Big Valley.” He died in 2000.

“The Undercover Man” is a good crime thriller. It will not make you forget “My Name is Julia Ross” or “Gun Crazy” or “The Big Combo”, though it will remind you of what a large talent can do with just a small amount of money.

The Undercover Man will be on TCM on August 7th at 10PM EST.