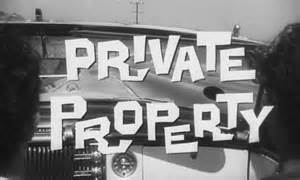 Private Property is an independent film from 1960 about two young and dangerous drifters who spy on and eventually work their way into the home of a beautiful young married woman. At the time of its release, the film was condemned by the Catholic Legion of Decency for its lascivious themes and violence. Thought to have been lost for many years, Private Property is a voyeuristic journey into the minds of the morally corrupt. Corey Allen, of Rebel without a Cause fame and later a TV director, and Warren Oates star as the two vicious losers out for a good time at any expense.

END_OF_DOCUMENT_TOKEN_TO_BE_REPLACED

In 1957, Allied Artists released a low budget gangster film called, Al Capone, starring Rod Stieger. The film was an immediate hit raking in over one million dollars. Big bucks back then for a low-budget film. The film is notable for starting a new cycle of gangster films that included Pretty Boy Floyd with Leif Erickson, Machine Gun Kelly with Charles Bronson, The Purple Gang with Barry Sullivan and a young Robert Blake, King of the Roaring Twenties with David Jansen, Mad Dog Coll with John David Chandler and Vincent Gardenia, and Portrait of a Mobster with Vic Morrow. There was even a hit TV series, The Untouchables.   Included in this blood shed of works was Budd Boetticher’s The Rise and Fall of Legs Diamond.  END_OF_DOCUMENT_TOKEN_TO_BE_REPLACED

If I choose to like John Milius’ 1973 AIP “Dillinger” more than Michael Mann’s current version of the outlaw’s life in “Public Enemies,” it is certainly not because Mann’s pixel filled opus lacks style. The film struck me as maybe having too much style. Johnny Depp’s Dillinger is way too cool for the times. Since cool as an aesthetic, as an attitude, is something that only became part of popular culture in the 1950’s (like James Dean in Rebel without a Cause), Depp’s brash Dillinger acts more like a modern day anti-hero than a mid-westerner who grew up on a farm in the 1930’s. Depp looks good in the 30’s style clothes; his aura just comes across as too modern. Warren Oates has no such façade, his Dillinger is not the natty dresser we see in Mann’s film and presents a more believable character.

Then there is Christian Bale’s Melvin Purvis, who is stoic but rather dull due to an underwritten character. He does not really do much. This unlike Ben Johnson’s version, who is as determined as Bale’s younger and more age appropriate Purvis in “Public Enemies”, depicts a fiercer grunting bear like, cold hearted, meaner and certainly more violent Purvis. Milius, who wrote the script, also gives Purvis some nice characteristic touches like every time he kills one of the FBI’s most wanted, he lights up a cigar, and he lit up quite a few during the film’s running time. Warren Oates’s John Dillinger is tough, handsome, in a rough sort of way, certainly no pretty boy like Johnny Depp, though it is Oates’ John D. who compares himself to movie star Douglas Fairbanks (actually it is Michelle Phillips’, Billie Frechette who compares him to Fairbanks the first time). In fact, Oates bares an uncanny close resemblance to the real John Dillinger. Both films parallel the similar duel stories of Dillinger and Purvis until they merge one faithful violent night outside the Biograph Theater.

Mann’s film is certainly better looking than Milius’ ”B” film, from the scenery to the actors there is nothing that is not “pretty.” If comparing the two, this makes Milius work look gritty. Mann’s constant stylization makes it seem every action in “Public Enemies” is a monumental moment even if the famed outlaw is only jumping over a fence.

Both films are plagued with inaccuracies, then again, you should not be watching a movie for a history lesson. History is sometimes not as neat as fiction. For example, Baby Face Nelson dies in both versions before Dillinger, while in real life, Dillinger died in July of 1934 while Nelson in November. Gang member, Homer Van Meter, also shown dying before Dillinger actually died a month later.

Characterizations change in each film, reflecting the filmmaker’s point of view. While in both versions, John Dillinger is portrayed as a gentleman, well actually, he is more of a gentleman in Mann’s version than in Milius’, where he beats up Billie Frechette pretty badly upon their first meeting. Depp’s Dillinger seems to have more respect for his woman. Frechette in the 2009 film is portrayed as a more tragic figure, and their affair is a central part of the film, where as in the Milius’ version she is pretty much regulated to the background. In Milius’ version of the Little Bohemia lodge shootout, the killing of FBI agents is way over the top with more G-Men dying than we had battlefield deaths in World War 2. John Milius’ love of guns is well known and he was never shy about using them.

Both films are loose with chronology and facts however; both were miles ahead of the 1945 film, “Dillinger” with Lawrence Tierney as Big John. Other than the name, there is not much that is true. Of course, truth is not a prerequisite for a good story.

John Dillinger, like Bonnie and Clyde and Pretty Boyd Floyd were rural outlaws in the tradition of Billy the Kid or Jesse James more than gangsters like say, Al Capone. They flourished during the great depression when banks were seen by many common folk as the enemy foreclosing on good honest working people. They also thrived because they out powered the law. Dillinger, as well as Bonnie and Clyde, favored the powerful Browning automatic rifles, which they generally stole from National Guard Armories. A trait, never explored in either film is how Dillinger became  a master criminal unlike Bonnie and Clyde who John D. looked down on as amateurs and wanted nothing to do with them. In both films, Dillinger is very conscience of his public image.

Milius does not waste anytime in his action packed film; even before the opening credits, which unfold to the tune of “We’re in the Money”, the gang robs a bank. From the get go, the film moves at a break neck speed with rarely a moment to catch ones breath. “Dillinger” was John Milius’ first film as a director. He had built a reputation as one of the 1970’s young and upcoming screenwriters with “Jeremiah Johnson” and “The Life and Times of Judger Roy Bean” to his credit. He also worked, uncredited, on “Dirty Harry.” At the time of its release, “Dillinger” seemed redundant of better films like “Bonnie and Clyde” (the depression, the use of We’re in the Money and even a scene where the “heroes” goes home one more time to see family before they die). Warren Oates is the perfect John Dillinger, the physical resemblance, as I previously mentioned is remarkable.  Ben Johnson vividly portrays Melvin Purvis; many will remember Oates and Johnson were on better terms as the Gorch brothers in Peckinpah’s “The Wild Bunch.” Cloris Leachman is Anna Sage, the lady in red and a crazed pre-star Richard Dreyfuss is maniacal as Baby Face Nelson. The Mamas and Papa Michelle Phillips made her screen debut as Billie Frechette. Harry Dean Stanton is Homer Van Meter who dies in a blaze of bullets courtesy of friendly local town folks, after a college student whose car he highjacked at gunpoint drives off leaving him in the middle of town. His final words: “Thing aren’t workin’ out for me today.” Overall, Milius accomplished just as much if not more with this low-budget rural outlaw film than Mann did with his millions of dollars in budget.