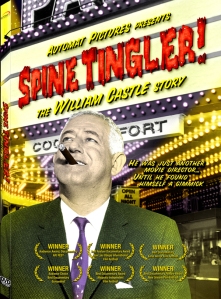 The first film I ever saw of William Castle’s was “13 Ghosts” back in 1960 at a local theater in Brooklyn called The Culver. Audience members were given viewers containing both a red filter and a blue filter that you would look through depending on if you wanted to see the ghosts or not after being prompted to do so by the movie. While it worked, the entire idea was not exactly state of the art special effects, even for 1960. But it was fun and “Spine Tingler: The William Castle Story” is even more fun and filled with memories, interviews and plenty of footage from Castle’s classic “B” filmography. For younger viewers and the uninitiated, terms like “Illusion-O,” “Percepto” and “Emergo” will be new but don’t worry it’s all engagingly explained.

Those familiar with only Castle’s horror films may be surprised to discover his earlier films and his association with Orson Welles. He was a second unit director for “The Lady from Shanghai.” Castle had purchased the screen rights to “If I Should Die Before I Wake” by Sherwood King, the source novel the film was based on,  and asked Welles to pitch the story to Harry Cohn of Columbia with the idea Castle himself would direct. It didn’t work out that way though with Cohn deciding to go with Welles directing. END_OF_DOCUMENT_TOKEN_TO_BE_REPLACED 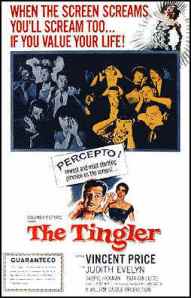 Only as a producer did William Castle ever make a truly great horror movie.  That was because he had the fortunate luck or the insight to have a great horror novel as the foundation and a master of the macabre as the screenwriter and director.  The film, of course, was “Rosemary’s Baby,” directed by Roman Polanski from Ira Levin’s best selling book.  If “Psycho” ushered in the era of the modern day horror films, “Rosemary’s Baby” gave the genre a more sophisticated acceptance than previously existed, at least for a few short years. 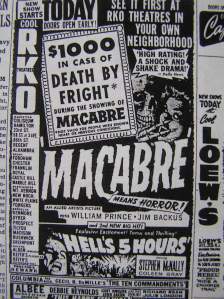 Now, I am not here to damn William Castle but to praise him.  Yes, his works are mired with dull direction; bad acting and certainly some of the scripts could have or should have been better. But, surprisingly, films like “Macabre,” “The Night Walker,” “The Tingler”, House on Haunted Hill”, “13 Ghosts”, “Strait-Jacket”,  and “Homicidal” hold up today better than expected.  The “Night Walker”, with a script by Robert Bloch, and an excellent cast headed by Barbara Stanwyck and Robert Taylor is certainly still a terrific thriller, as is “Strait Jacket,” again scripted by the talented Robert Bloch. This film starred Joan Crawford and Diane Baker.  Certainly, the casting of these excellent actors was an advantage, which enhanced both of these films. In Matthew Kennedy’s new biography Joan Blondell: A Life Between Acts” Kennedy tells the story that Blondell was all set to play the role eventually portrayed by Crawford until either Crawford assumed the role was hers after talking with Castle at a social gathering or Blondell bowed out due to illness depending on which story is to be believed. Either way it sounds pretty enticing the thought of Joan B. in the role of the psychotic mother. Then there is “The Tingler” and “Homicidal” both still strange and scary enough to send shivers down your spine. The test of time has made William Castle’s work more appreciable.  Known best for his publicity  gimmicks, such as “Illusion O”, where in “13 Ghosts,”  filmgoers were given special glasses upon admission, giving them the choice of whether view the ghosts by wearing the glasses, or not.  With “The Tingler” the gimmick was called “Percepto” which was nothing more than electric buzzers attached to selected seats in the movie house designed send a few shock waves giving the person sitting in the seat a slight tingle.  Can you imagine doing a stunt like this today? Lawsuits would be filed quicker than a 95 mile an hour fastball! Then there was “Macabre” where Castle sold policies, insuring the filmgoer against dying of fright!  As an aside, all this is lovingly portrayed in Joe Dante’s affectionate look at schlock movie making in “Matinee.” (1993)  John Goodman stars, playing a character obviously inspired by William Castle. 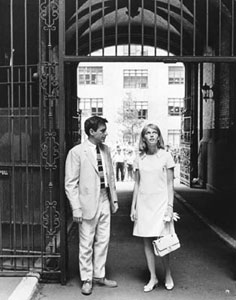 In most cases, Castle’s films have been dumped upon by critics, yet teenage audiences and quiet a few adults of the late fifties and early sixties loved these films. It would probably be politically incorrect to make some of these films today. “Macabre” with its story of a young child being buried alive would be too frighteningly real today.  Like all films, they are a product of their times.

Many of Castle’s films are more fun and thrilling to watch than the majority of the blood and gore stuff that is released as horror today. Unfortunately, only a few of  Castle’s films have been made available for home video, “Strait-Jacket”, House on Haunted Hill,” “13 Ghosts” and “The Tingler” with its original color sequence in tact. “The Night Walker” was released years ago in VHS but sadly has yet to see a DVD release. If you are resourceful enough you can find some of the others through private collectors willing to trade barter or sell. In 2007, a documentary on William Castle was released called “Spine Tingler: The William Castle Story.” The film had a limited release and as of now, there is no scheduled DVD release. Also worth seeking out are the trailers,   you know those “Coming Attractions,” of William Castle’s movies, some of the most entertaining ever done, this side of Hitchcock.  Also worth seeking out is his autobiography “Step Right Up! I’m Going to Scare the Pants Off America.”