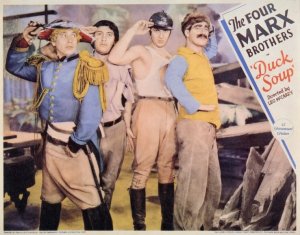 Revolution for the Hell of It, Abbie Hoffman wrote back in the late 1960’s but he was way too late in his call. Some thirty-five years earlier the Marx Brothers blew the lid off turning rebellion into a mischievous art form in Leo McCarey’s masterpiece of mayhem, Duck Soup. Marxist chaos rules in the land of Freedonia.

It is difficult to imagine what a depression era audience, the film was made in 1933, made of the pandemonium being presented to them on screen. Like in all previous films, the Marx Brothers have no respect for anything. All positions of authority are targets for ridicule. Anti-politics, anti-war, anti-authority; as Groucho once sang in an earlier film (Horse Feathers), Whatever It Is, I’m Against It.” To the Marx Brothers it was all fodder for their antics to exploit the self-righteous, the rich, and the pompous and most all themselves.

Not so surprisingly, Duck Soup was a financial flop, and Paramount ended their relationship with the Brothers after five feature films. Irving Thalberg and MGM would pick them up. Under the cover of the big lion Thalberg would sanitize, soften and make the team more palpable by adding silly romantic subplots with the likes Kitty Carlisle and Jack Jones that just stopped the bedlam dead in its tracks. For the first two films under the boy genius, with the help of George Kaufman and Morris Ryskind doing the scripts, the MGM works are still outstanding, if you excuse those dead spots filled with romance and mundane musical numbers the MGM staff insisted on putting in. A Night at the Opera and Day at the Races are rightly lumped up there with their best works, that is as long as you fast forward passed the deadly musical interludes.

Duck Soup is the Marx Brothers masterpiece. It’s the one time they worked with a gifted director. It is the most original, chaotic, and I mean that in the most complementary way, film of all their works. In previous films they attacked the pompous upper class (Animal Crackers), Prohibition and Universities (Horse Feathers) and here they go after bureaucrats and the futility of war along and just about everyone who crosses their path.

The plot will be described briefly, since this is a Marx Brothers movie and plot is incidental. More than plot one must look at the film as a group of related skits loosely tied together by Marxist insanity. Anyway, here it goes. The country of Freedonia is broke and in need of an influx of money. The only person willing to provide the large amount is Mrs. Teasdale (the wonderful Margaret Dumont) but only if Rufus T. Firefly (Groucho) is made President of the country. Meanwhile the Ambassador, Trentino (Louis Calhern), of neighboring country of Sylvania has designs on taking over Freedonia. He enlists two spies, Chincolini (Chico) and Pinky (Harpo) to infiltrate Firefly’s inner circle and create more havoc than normal. From this loose foundation we get one outstanding piece of comical business after another, physical slapstick, double entendres and plenty of Groucho’s puns upon puns. 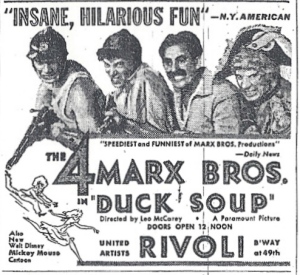 As a leader, Firefly leaves a lot to be desired. He insults both enemies like Trentino, (” Maybe you can suggest something. As a matter of fact, you do suggest something. To me, you suggest a baboon. Uh, I’m sorry, that isn’t fair to the rest of the baboons”), and friends like Mrs. Teasdale (“Remember, you’re fighting for this woman’s honor, which is more than she probably ever did.”). 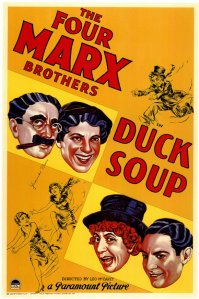 Duck Soup takes place in a mythical European country yet the characters names are all similar to what we have heard before. Groucho’s Rufus T. Firefly is typical Groucho. While Chico’s name though European (Italian) is just a variation of names he previously used (Ravelli in “Animal Crackers”, Baravelli in “Horse Feathers”) and would use later (Fiorello in “A Night at the Opera”). Louis Calhern’s Sylvanian Ambassador also has an Italian sounding name (Trentino). Then there is Margaret Dumont’s Mrs. Gloria Teasdale who despite the fact she is Freedonia’s richest citizen has an upper crust non-ethnic name. Like everything else in this film it seems to make no glorious sense, but oddly in the world of the Marx Brothers it does.

For much of the film, Chico and Harpo get the best of Groucho. Harpo is Groucho’s chauffeur, but manages to leave him behind every time he wants to go somewhere. Then there is the film’s most famous skit. It has become known as the mirror scene, where Harpo and Chico sneak into Mrs. Teasdale’s home to steal war plans locked in a safe. During the botched attempt Harpo breaks a full length mirror. Groucho comes down in a nightshirt and cap to investigate. The two “spies” already dressed exactly like Groucho, previously  tricked the clueless Mrs. Teasdale into giving them the combination. Harpo pretends to be Groucho’s mirror image as he stands opposite him where the now broken mirror once stood. Harpo matches every move Groucho makes in his attempts to catch him in a mistake. This scene has been imitated many times over the years from Bugs Bunny to The Three Stooges to Harpo reprising the scene with Lucille Ball.

Much of Firefly’s dialogue is a contradiction of what he just previously said. He tells Chincolini he can’t have the job he was going to offer him. “What job was that?” he asks. “Secretary of War,” Firefly answers. “Good, “I’ll take it,” says Chincolini.  “Sold!” Firefly replies. Then there are the insults when Mrs. Teasdale announces the Ambassador has arrived with a change of heart. “A lot of good that will do him, he still has the same face.” Firefly responds. A diplomat he is not.

War is declared by Trentino after is being slapped in the face by Firefly. The entire ‘battle’ sequence is frenzied. Groucho’s military uniforms change from one scene to the next, from one period to another. Newsreel footage of police cars, fire engines are inserted, the meaningless of war, the senseless, pettiness of diplomatic ‘honor’ as an excuse to wage battle. False national pride is ridiculed when Mrs. Teasdale attempts to sing the Freedonian national anthem only to be is bombarded by apples thrown by the Brothers. Chico and Harpo change sides after realizing “the food is better in Freedonia.”  Apparently, one real dictator, Benito Mussolini, took Duck Soup a bit too personally as a direct insult and banned the film in Italy.

The screenplay was written by Harry Ruby and Bert Kalmar with additional dialogue by Nat Perrin and Arthur Sheekman. Ruby and Kalmar previously worked with the Marx Brothers on Horse Feathers as screenwriters, but the team were mainly songwriters responsible for many of Groucho’s most famous songs including,  Whatever It Is I’m Against It (Horse Feathers),  Hello, I Must Be Going, and Hooray For Captain Spalding, both from Animal Crackers, the latter of which would become Groucho’s theme song for his hit radio and TV quiz show, You Bet Your Life.

As I mentioned earlier, Duck Soup was not a success at the box office and led to the end of the Brothers tenure at Paramount. The film opened at the Rivoli Theater on Broadway in New York where it played to small audiences for its three week duration. It would also be Zeppo’s last film. From here on in there would only be three Marx Brothers on screen. I really did not mention Zeppo because he was a non-entity in this film as he was in all their films. He was there but he lacked any screen presence, generally looking uncomfortable like some guy wearing a stiff collared shirt one size too small.

Duck Soup is the Marx Brothers best film. It doesn’t have any romantic ingénue love stories, no bland musical numbers, not even Harpo and Chico’s musical interludes. It’s pure, uncut Marxmania. Leo McCarey has said over the years he did not like making this film. He found the Brothers unmanageable. The end result is the film is more Marx Brothers than Leo McCarey and maybe that is where his problem stems from, but for most of us this film is a pure joy.