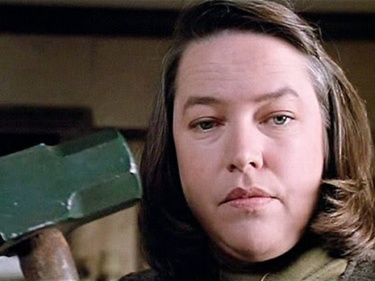 Whether you are a musician, writer, actor, artist or any other public figure, you know having fans is an integral part of the experience.  Fans are supportive, financially and  artistically. Fans follow the artist on social media, fans share experiences and thoughts between each other, and fans are devoted.  However, with some fans there comes the point when that devotion takes a turn toward some very dark places; far from the ordinary, toward the bizarre, the maniacal or even worst. Fan is short for fanatic which derives from the Latin adjective fanaticus. Unlike the average or normal fan, the fanatic has lost all perspective of their relationship to the artist. They are overly passionate  and unreasonable in their devotion to their idol. Some even feel they know the artist and have a personal relationship where the artist is speaking directly to them. It’s all very delusional, and needless to say, way outside the boundries of what is considered conventional behavior. Then there is Annie Wilkes. 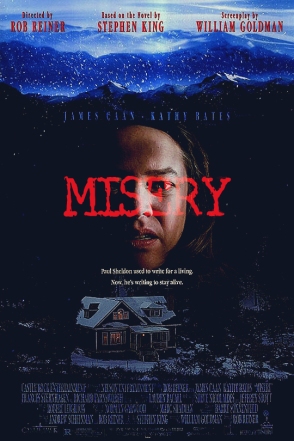 Misery tells the story of novelist Paul Sheldon who wants to change the course of his writing career. A successful author of bodice-ripping, historical romance novels featuring heroine Misery Chastain, Sheldon wants to transition to serious literary fiction. The author has just finished his latest book, the first in his post-Misery Chastain series. Though he lives in New York, superstitiously, he always likes to complete his books at a lodge in Colorado. Finishing up the book, instead of heading back to the east coast, Sheldon decides to travel on to Los Angeles. Driving thru the Colorado Mountains, Paul runs into a severe snowstorm with extremely treacherous road conditions; his car suddenly swerving every which way and going off the road, down an embankment, flipping over in the process. When Sheldon comes to, he finds himself seriously injured and in the home of former nurse, Annie Wilkes who just happens to be his self-proclaimed number one fan. It turns out Annie, a bulky and strong woman found the overturned car, pulled Paul out and took him home. Was she following (stalking?) Paul? Maybe. Being his number one fan, she knew his writing ritual and where he stayed when in Colorado. Either way, it was fortunate, or maybe not s fortunate, she came by and recused him.

Annie is obsessed with the author’s Misery Chastain series. During his ‘stay’ at her farm house, the final Misery book becomes available. Annie quickly picks up her reserved copy at the local bookstore. To Annie’s shock and anger, Misery dies at the end of the book finishing off the series. For Annie, this betrayal, it’s nothing less, is intolerable. How could Paul kill off Misery? Annie’s favorite character of all time. Annie’s quickly turns from Florence Nightingale to Nurse Ratchet with Paul realizing he is more a prisoner than a patient. Annie insists Paul must write another Misery Chastain novel resurrecting the heroine from her untimely demise. She also forces the author to burn his new literary work. Paul, unfortunately, was not yet into using computers to write and his only copy of the manuscript was on paper, thus once set on fire, it was gone forever. 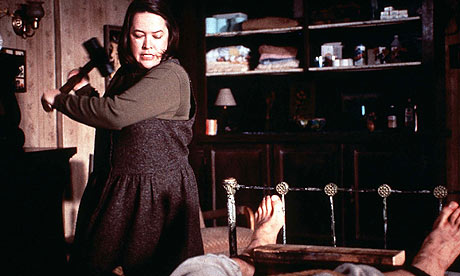 Annie’s behavior is that of an extreme version of an overzealous fan. But it gets even worse as Paul, and we the audience, learn even more unsettling news about Annie. During her years working as a nurse, Annie was suspected of killing a series of patients at the hospital where she worked.

Crazy Annie is obsessive and controlling; her attitude reminding me of Bette Davis as Baby Jane. She cuts Paul off from the outside world,  denies her ‘patient’ food when he ‘misbehaves’ punishing him like a mother hen gone psycho. Her verbal outburst and abuse are just as frightening, turning on and off as quick as you can strike a match. Despite her character’s bizarre behavior, Kathy Bates somehow manages between all this unsettling horror to instill a darkly comic tone  at times into her performance which in the end makes Annie Wilkes, and the film, even more horrifying. 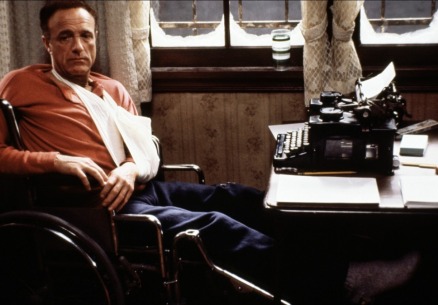 Directed by Rob Reiner with a screenplay, adapted from King’s novel, by William Goldman, Misery is, on the surface, a nicely crafted thriller. However, as he has done in many of his works over the years, King digs a bit deeper, In this case, what it means to be a writer: the fears, the uncertainty and dilemma’s they face. In Bag of Bones, Mike Noonan has a severe case of writer’s block, in Secret Window, Secret Garden, King’s surrogate, Mort Rainey  deals with plagiarism of the worst kind. Other works by King with writers as characters include The Shining, The Dark Half, Salem’s Lot, Word Processor of the Gods (short story from the Skeleton Crew collection) and a few others. For Paul Sheldon, writing the Misery Chastain books has brought much financial success and fame, but like with many things in life, success sometimes it comes with a high price tag. For Paul, who had aspirations of being a serious author, it was a career where he became best known for being a hack romance writer.  Now, though with financial success, he can afford to rid himself of his ‘Misery’ and write his version of the great American novel. Unfortunately, Annie Wilkes did not quite see it that way.

Along with the script, the film works because of Kathy Bates who turned in a horrifically split toned performance as the nurse from hell, giving Louise Fletcher’s Nurse Ratchet in One Flew Over the Cuckoo’s Nest, a run for her psychotic money.  Bates’ ‘mood’ swings transition from one moment when she is behaving sweet, concerned and charming to flat out terrifying. She accomplishes this smoothly and convincingly. You never feel she is acting. Bates accomplished performance convinces you Annie Wilkes is a woman completely unhinged. Fittingly, Bates, still relatively unknown at the time, received an Oscar for her performance.

There are other engaging performances from Richard Farnsworth and Frances Sternhagen. Unfortunately, Lauren Bacall is wasted in a small role as Paul’s agent.

Going in, we know this is not an art film or a serious work. What we’re watching is pure pop culture entertainment presented by some of the best names at it, King, Reiner, and Goldman, along with the tremendously effective performance by Kathy Bates deliver the goods. And as Jerry Seinfeld said, “Not that there’s anything wrong with that.”

This post is part of the Great Villain Blogathon. For more takes on nasty cinema villians click here.