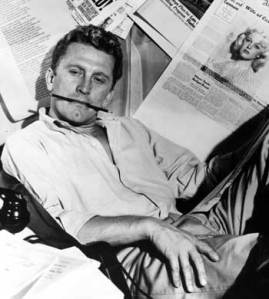 Manipulation, exploitation, opportunism, and hard-boiled vile, shaken, mixed and slammed into your guts by Billy Wilder. “Ace in the Hole” (aka The Big Carnival) is a lurid, take no prisoners portrait of the news media delivering a knock down nasty assault on journalism and the morbid character of the blood leeching public. No one is spared. A film made more than fifty years ago, yet more relevant today than ever.

From the moment journalist Charles Tatum (Kirk Douglas) arrives in Albuquerque in his broken down vehicle to the final shot of him falling down dead, his face inches from the camera, Wilder creates a rare work that scorches the celluloid it was made on. A disaster at the box office when first released, the film was a hit overseas in Europe where critics liked it for Wilder’s attack on American ethics, even winning the International Award at the Venice Film Festival. Wilder was stung by the bad reviews and poor box office and retreated over the next several years, sticking to adaptations of plays and novels. It was not until 1959 with “Some Like it Hot” that he would do another original screenplay. Critics in the U.S. must have taken the attack personally which may account for the hostile reviews. Bosley Crowther in The New York Times wrote, “Mr. Wilder has let imagination so fully take command of his yarn that it presents not only a distortion of journalistic practice but something of a dramatic grotesque.”   I guess Mr. Crowther could not take a joke, especially when the morbid joke is on his profession.

Kirk Douglas stars as the egotistical, self-centered despicable Tatum exiled to Albuquerque, New Mexico. As soon as he arrives Tatum makes his way straight to the office of the Albuquerque Sun-Bulletin where he reveals his fast talking smart ass personality right away when he notices a needlepoint hanging on the wall with the words TELL THE TRUTH weaved in. “Who did that?” He questions. A woman sitting nearby responds, “Mr. Boot, but I did the needlework.” Tatum’s sarcastic retort, “I wish I could coin’em like that. If I ever do, will you embroider it for me?” 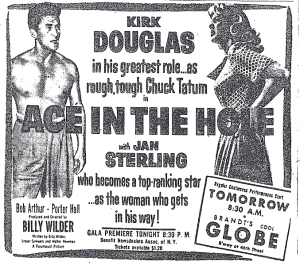 He talks Boot, the publisher, into giving him a job, admitting that drinking, a libel suit and fooling around with a publisher’s wife got him kicked off eleven newspapers back east.  Now he wants to get the one big story, the one that is going to take him back to New York.

One year later Tatum is still doing county fairs and rattlesnake hunt stories. His big break comes when a poor sap named, Leo Minosa, is trapped in an Indian Cave dwelling while searching for ancient artifacts to sell at his nearby souvenir store. Tatum sees the story as his big break and orchestrates a plan to prolong Leo’s predicament thereby creating a national media sensation and getting an exclusive story that will get him back to the big city beat.  Loraine (Jan Sterling), Leo’s trashy peroxide wife sees this as an opportunity to split from her dull life of five years until Tatum convinces her that there is money to be made and she would be a fool to leave now. 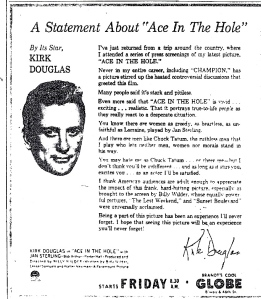 Soon, huge crowds, paying a twenty-five cents admission, arrive creating a carnival atmosphere trivializing the tragedy. For their money, they get a country and western singer singing a song about Leo, while a young woman standing next to him sells the words and music, along with food concessions, a carousel, souvenirs and a front seat to America’s latest sideshow.

Today, opportunistic journalists pushing the limits of ethics is a recurring trend. Remember Jayson Blair, fired by The New York Times for fabricating articles on the Washington D.C. snipers, and Stephen Glass who was fired from the New Republic after fabricating a series of articles on a young computer hacker in addition to inventing other stories. The news media, in general has become more about show business, making news more than reporting news objectively. You have a segment of the population whose only news sources are Jon Stewart and Stephen Colbert on Comedy Central. We have been subjected to countless stories of sensationalism and exploitation. There was O.J. Simpson’s Ford Bronco chase televised, with NBC even interrupting the NBA finals to join in on the reporting, and the coverage of Princess Diana’s death. So-called entertainment news shows, making “superstars” out of marginal personalities like Paris Hilton, and the Anna Nicole Smith saga that was practically on television nightly for a year after she died. Charlie Tatum would fit right in with today’s media world.

Kirk Douglas is perfectly cast as the caustic, success at any price, driven Charles Tatum. Wilder’s casting of Douglas is a perfect meeting of character and the right actor fusing together. Jan Sterling who made a career out of playing trashy women is equally venomous as Loraine Minosa, Leo’s hard-boiled low life wife who can’t wait to get out of town.

Wilder has been criticized for his unobtrusive camera. In interviews, he has stated he does not like it when the camera gets in the way of the story. Fancy camerawork just distracts from the movie. He makes movies, not cinema.  That said, in “Ace in the Hole” there are at least two outstanding uses of the camera that belie this fact. First, when Tatum goes to the church to get a priest to give Leo his last rights, Wilder sets the camera at a low angle from behind the car Tatum drove. He points the camera up at the gate entrance and the adobe church behind the gate, both of which have crosses that appear as if they are next to each other, a beautifully composed shot. The other shot is the last in the film when Tatum falls down dead, his face practically hitting right into the camera.

Wilder’s previous film, “Sunset Boulevard,” was a huge success and on its way to classic status giving Wilder his artistic freedom.  He decided to split with his long time writing partner Charles Brackett with whom he had written such films as “The Lost Weekend,” “A Foreign Affair,” “Hold Back the Dawn,” “Ninotchka,” “Midnight,” “Bluebeard’s Eight Wife” and others.  For this film, Wilder selected Walter Newman and Lesser Samuels as his writing partners. The ideal for the film began with a true incident that happened back in 1925, when a man name Floyd Collins, was exploring a cave in Central Kentucky and became trapped fifty five feet below the surface. The story made national news when a young reporter started interviewing Collins while still trapped drawing media attention and thousands of gawkers. 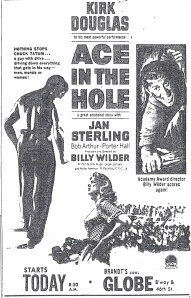 Tough acidic movies about journalistic integrity remain rare but there have been some. In 1957, Elia Kazan’s “A Face in the Crowd” gave a preview of the power of the media in political elections. A couple of years later the Kennedy-Nixon debates would validate the power of television.  Alexander MacKendrick’s magnificent “Sweet Smell of Success,” a film almost as acidic and ruthless as Wilder’s film came out the same year and is a must see with excellent performances by Burt Lancaster and Tony Curtis. What a double feature, “Ace in the Hole” and “Sweet Smell of Success” would make! After watching that, you would have to wash your mouth out with Listerine just to get the sour taste out of your mouth. More recently, two films that have dealt with disreputable reporters are Costa Gravas’ “Mad City”, and Billy Ray’s “Shattered Glass” (2003). I have not seen either one so I cannot really comment though I doubt either of these films reaches the level of success or pungent taste that Wilder’s film achieved. “Ace in the Hole” is in a class by itself, and one other thing, nobody today writes dialogue as well as Billy Wilder.

Note:  A couple of years ago I did a series of reviews for Halo-17 an Australian music and arts website which from what I can tell is no longer out there in cyber space. In the past I have occasionally linked to some of these reviews here at Twenty Four Frames. Recently, it seems all the links lead to an internet void, subsequently over the period of the next few weeks and months I will be posting these reviews here in updated versions. “Ace in the Hole” appears here in full for the first time.