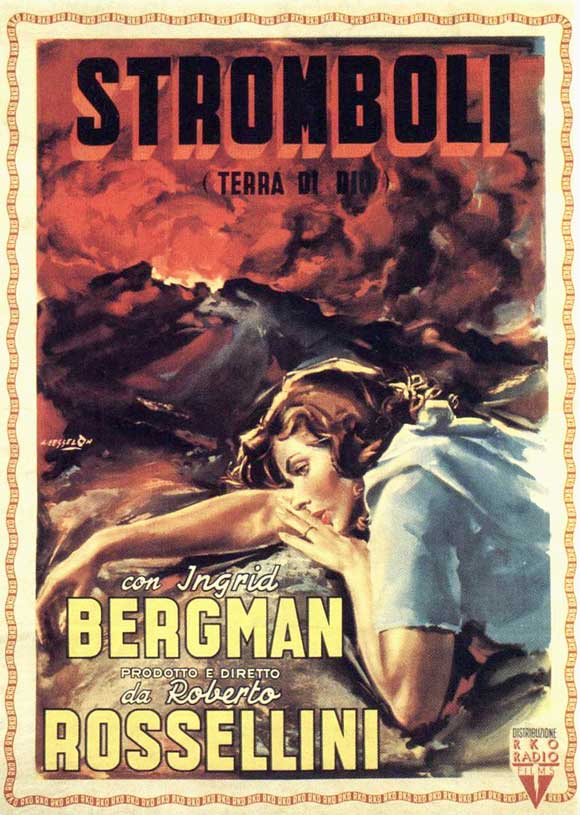 Like her character, Karin in “Stromboli,” Ingrid Bergman found herself ostracized in real life from Hollywood and America after making this film with her director/lover Roberto Rossellini. Their affair and out of wed-lock child caused a scandal that found Bergman unable to find work in the United States for six years. In the film, Bergman is a Lithuanian refugee, released from an internment camp when she marries Antonio (Mario Vitali), an Italian and former prisoner of war. They go to live in his home in Stromboli, an almost deserted village located on a small volcanic island off the coast of southern Italy. Marriage and life in the poor village is far from what Karin envisioned for herself. Most locals who were born there have left. The ones who remain are a stoic group unwelcoming to strangers. Her attempts to brighten up their home by decorating are met with indifference from Antonio.

When she becomes friends with Mario, the good looking lighthouse attendant, Antonio, upon discovering their friendship, beats her and locks up her in their home. Convinced she can no longer take this life of isolation in the village she takes off toward the recently erupted volcano with thoughts of committing suicide.

“Stromboli’s” release in America was met with both barrels of a shotgun, one from the critics and the other, more damning from politicians, clergymen and the self righteous public. Banned in Georgia thanks to a state senate resolution, initiated by one Senator Lumford, banning all films starring Ingrid Bergman or made by Roberto Rossellini stating the couple were a danger to American society with their irresponsible life style. Senator Edwin C. Johnson of Colorado, condemned Bergman on the floor of the U.S. Senate attempting to push through a bill banning Bergman from America in order to protect Americans from the moral decay she and Rossellini posed.

Clergymen in the cities of Los Angeles, Philadelphia, Memphis and the state of Indiana found Bergman and Rossellini’s conduct a symptom of moral corrosion. However, the biggest firepower came from the American Catholic Church criticizing Bergman for brazenly attacking the laws of God with cheap tawdry behavior masquerading as romance. The Boston Pilot declared, “The devil himself is at work.” In Europe, the Church was generally more tolerant condemning the “cannibalistic aggression” in America against Bergman. Surprisingly, the Legion of Decency rated the film acceptable issuing a statement that read, “It is our policy to judge the film itself, not the actors in it.”

The critics were not much kinder. In New York City where the film opened in more than 100 theaters, New York Times critic Bosley Crowthers states…

“Let’s be quite blunt about it. The story is a commonplace affair, completely undistinguished by inventiveness or eloquence in details. A Czechoslovak woman, whom the handsome Miss Bergman plays, marries an Italian ex-soldier to escape from a displaced persons camp and goes to live with him, without love or interest, on Stromboli’s bleak volcanic isle.”

In an article printed in the New York Times the weekend after the film opened Crowthers wrote the following, “As to the artistic merit of “Stromboli,” that is easy to state. In this corner’s  estimation, it has absolutely none. As a matter of fact, it is dumbfounding that two people with such acknowledged gifts as Mr. Rossellini and Miss Bergman should have spent their talents to such an end.” This from a critic who also knocked Siodmak’s excellent film noir, THE KILLERS and most infamously, Arthur Penn’s BONNIE AND CLYDE which finally ended his stranglehold as the top critic at the Times.

Crowthers did get one thing correct, Stromboli’s bleak volcanic isle. He is practically wrong about everything else in his review from the “Czechoslovak” woman when Bergman’s character clearly states she’s from Lithuania to a story undistinguished by inventiveness. What Rossellini gives us here is a post war story of a woman who is in pursuit of a better life only to find herself isolated in a remote backward fishing village where women have little rights and are considered either Madonna’s or whores. Karin’s openness and general demeanor are alien to the closed society.

In the beginning the crowds came, but they quickly diminished and the film faded from the screens in cities where it was allowed to be shown. What the American public saw was a truncated version of Rossellini’s work. RKO, under Howard Hughes, cut the film to 81 minutes, from its original 107 minutes, for American distribution. Hughes apparently found the film dull slashing it and in the process making it a bastardized version. Rossellini was upset to say the least.

Most of the characters were locals and like all films from the neo-realist period this contributed to the film’s gritty desolate documentary mood. You can almost feel the volcanic ash (1) that covers the island or smell the fish in the exquisitely detailed deep fishing scenes, one of the highlights of the film. One can understand Karin’s depression; the island, the people are at the bottom of life’s food chain. Most seem to live day to day in their drudgery with little signs of happiness. The local priest just tells Karin she must accept her dismal life.

“Stromboli” is not a masterpiece or even a satisfying film. It does drag in spots but it remains a fascinating document. Bergman is beautiful, maybe a little too beautiful for the role, standing out from the rest of the cast. There is one spectacular semi-erotic scene where she wades knee deep in the ocean, holding her dress up a bit exposing her legs, which is met with distain by locals who see her. In truth, it is a lovely scene beautifully as photographed by her director and over Roberto Rossellini.

(1)  While filming the volcano scenes the filmmakers had to climb up the volcano and live there with no plumbing or electricity.

As Time Goes By: The Life of Ingrid Bergman – Laurence Leamer