E.J. Bellocq is best known today for his evocative photographs of the prostitutes of Storyville, the notorious section of New Orleans where prostitution became legal in the late 1800’s and lasted through the early years of the 20th century. Bellocq was a native of New Orleans and began his photographic career, first as an amateur photographer then turning professional, shooting mostly ships and machinery for local companies in the area. However, Bellocq did have a private side to his life  few people knew about. He would travel across Basin Street to Storyville where he turned his 8×10 camera on the ladies of the New Orleans night.  It is these photographs Bellocq today is best remembered for.  In many ways, the portraits at first seem standard portraits of the women of the day except that in many pictures the ladies are nude, though not always. Some of the women seem uncomfortable in the photos, not because they are naked, but more likely because they have no idea how to pose in front of the camera. Yet, others come across as very comfortable, relaxed, posing with an innocent grace. Bellocq was no pretencious “artist,” his work is very informal, almost anti-artistic. They have an old world charm, the women are plump, the clothes almost 19th century. The photographs become even more intriguing for the details they reveal about the interior living conditions, what it looked like inside these “specialty” houses. For example, in one of the photos we surprisingly see college banners (Louisiana, Michigan and Missouri) hanging on a wall.

By 1978, the “Jaws,” “Star Wars” blockbuster mentality had just about taken over from the sophisticated, artistic, personal films of the early 1970’s.  Out of synch with the new Hollywood trend, French New Wave director Louis Malle released his first American film, PRETTY BABY in 1978 with Keith Carradine as E. J. Bellocq. The film also stars Susan Sarandon and a young Brooke Shields as mother and daughter. Sarandon is a prostitute named Hattie with a 12 year old daughter (Violet). The story opens with Malle playfully seducing the audience’s expectations as we first meet Violet in an extreme close up of her face.  On the soundtrack we hear what sounds like a woman approaching a sexual climax. However, as Malle soon reveals the woman is really in the middle of child birth.

Bellocq comes to the house of ill repute one day requesting to photograph the “employees.” The cocaine sniffing house Madame, Nell (Frances Faye) ,agrees only after Bellocq agrees to pay for the privilege. Bellocq befriends Violet as he goes about meticulously photographing the ladies of the house. Soon after, Madame Nell decides Violet is ready to enter the house business raffling off her virginity to the highest bidder.  A celebratory ceremony accompanies Violet’s delivery to the winner. Both Bellocq and the black piano player known as the Professor (Antonio Fargas) stand off to the side from the “festivities” effectively reflecting their unease with the perverted ritual, yet both remain quiet, no attempt is made to stop it, knowing this is Storyville and that’s the way it goes.

Hattie wants out of the business and manages to marry a financially well off customer, leaving New Orleans and her past behind, moves to St. Louis. Violet refuses to go, for her, this house is her home, she stays behind. However, Violet does eventually go to live with Bellocq. They marry, he gives her a doll. Yet Bellocq’s real passion in life is his photography which frustrates Violet who though so experienced in many ways is still a child of 12 and acts as such. Hattie, now a proper lady, returns. Against her daughter’s marriage, she has come back to New Orleans to take Violet back with her to St. Louis. Bellocq lets her go realizing the young girl needs a more normal life than he can ever provide. 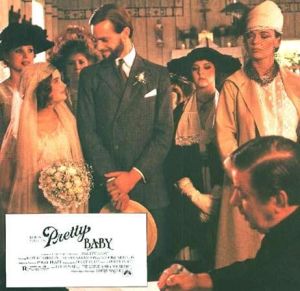 Malle’s intent is to present a particular period and place in time. Not a good time, a sad one in fact, but unique and one that did happen. Malle and cinematographer Sven Nykvist take an unpleasant subject and managed to handle it with taste. There is nothing neither salacious nor extremely explicit in the film. Malle co-wrote the screenplay with Polly Platt. Adding to the atmosphere is the excellent soundtrack filled with ragtime tunes by Jelly Roll Morton, Scott Joplin and others.  Most versions available today on DVD are edited by a few minutes. Additionally, some frames, specifically some shots of young Ms. Shields, have been blow up to avoid showing her nude.

Many of Bellocq’s photographs are dutifully recreated in the film, though much of his work, all glass negatives were destroyed and no prints were ever found. However, some of his Storyville negatives survived over the years.  What remains a mystery is why some of the surviving works, the original glass negatives, contained damaged faces that were scratched or totally obliterated. Whether this was done purposely or not and by whom remains unknown.

Bellocq’s work remained relatively unknown until Lee Friedlander, then a young photographer, purchased the surviving glass negatives. He first became aware of their existance in the late 1950’s. A showing of Bellocq’s work with new prints by Friedlander became part of an exhibition at the Museum of Modern Art in the early 1970’s. Fame came to Bellocq some twenty years after his death.

Not much is known about the real Ernest J. Bellocq except for the fact he had a slight physical impairment; he was short and did not indulge in any sexual activity with the women in the profession. He has been compared to Toulouse- Laitreac physically, but how true that is, I do not know. He spent his final years roaming the streets of New Orleans going from one camera store to another becoming a fixture in some of the establishments. His Storyville photographs went unknown to all except for a few people and the idea he someday would be considered an artist with his work hanging in New York’s Museum of Modern Art would have been laughable to those who knew him.

In addition to the exhibit at the Museum of Modern Art in New York, Louisiana Tech University honored Bellocq by naming a photography gallery after him. Bellocq’s work has also appeared in books like “Storyville, New Orleans.” As a character Bellocq has appears in various novels including Peter Everett’s “Bellocq’s Women.”