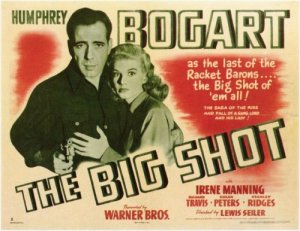 Joe “Duke” Berne (Humphrey Bogart) is a three-time loser. One more arrest and the law will send him away for life. With that ingrained into his head, Duke has given up the criminal life. The problem is getting a regular job, you know how it is, who’s  going to hire an ex-con? No one, so here he is roaming the streets, unshaven, wondering where his next meal is going to come from.

In desperation, Duke gets involved with some old cronies who are planning an armored car robbery. At first Duke wants nothing to do with it. He wants to remain clean despite taunts from a young punk named Frenchy who calls Duke a coward even throwing a glass of milk in his face. Duke takes it all.

When Duke finds out mob lawyer, Martin Fleming (Stanley Ridges) in backing up the deal he becomes interested.

Duke visit’s Fleming who is now married to Lorna (Irene Manning), Duke’s former lover. It’s obvious from the first time they see each other, Lorna still has a thing for Duke and visa versa. With Duke in charge they plan the robbery (Duke straightens Frenchy out by throwing a glass of milk in his face and kicking him off his chair) which all seems to think will be a piece of cake except for Duke. The night of the robbery as Duke is getting ready to join the boys, Lorna shows up at his door pleading with him not to go through with it. She tells him they could run away together and start a new life. Duke, still hooked on Lorna, stays with her.

The robbery, without Duke goes bad, all the criminals are killed except for Frenchy who will get his revenge on Duke soon after. A witness to the robbery, an elderly woman, is brow beaten by the police into mistakenly identifying Duke as the crook who got away.

Duke, now being hunted by the police, figures the only way to get himself off the hook is to get Fleming to defend him by setting up a full proof alibi. Fleming double crosses Duke after Frenchy, getting his revenge, tells Fleming about finding Duke and his wife together.

The remainder of the film spirals out of control as Duke escapes from prison, but in an unbelievable moment of weakness agrees to give himself up in order to set the record straight about a young con who is innocently being accused of being part of the escape plan and the resulting murder of a prison guard. We know from the beginning, Duke is doomed since the entire story is told in flashback from Duke’s deathbed in prison.

“The Big Shot” was made after Bogart had finally become a major Warners star that is after “The Maltese Falcon” and “High Sierra” so it is surprising to see him in a film that has the look and feel of a programmer. Still, Bogie is Bogie and he makes the film enjoyable but overall there is not much there. The car chase sequence toward the end is poorly planned with state police on motorcycles chasing after Bogie and his girl along a snowy icy twisting road. The motor cycle cops are implausibly shooting at Bogart’s car with one hand while managing to steer the motorcycle along the icy curved road with the other.

Directed by Lewis Seiler, who spent most of his career cranking out standard melodramas and westerns of little distinction. Bogart during his second tier days worked with Seiler in quite a few films (Crime School, You Can’t Get Away With Murderer and King of the Underworld), Seiler’s other works include some early westerns starring Tom Mix, “Tugboat Annie”, “Pittsburgh” and “Guadalcanal Diary”, probably his best known work. George Raft turned down this role and as he did with “High Sierra” and “The Maltese Falcon” and just like those earlier flicks, Bogart took over the part.  Don’t expect much from this minor film other than Bogie who makes it worth at least one viewing considering it was his last gangster role.