Comedy films of the 1940’s were a fairly diverse group from social commentary, satire to slapstick. From the sophistication of Ernest Lubitsch to vaudeville based films of Abbott and Costello. I love it all. Abbott and Costello narrowly missed the list, as did so many others.  The 1940’s  was a rich period for comedy in films.  It wasn’t easy narrowing the list down to just ten. This is the fourth post in the series. You can read about them here. 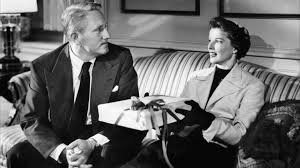 Written by the husband and wife team of Garson Kanin and Ruth Gordon, Adam’s Rib is once of the most charming and funny battle of the sexes comedies to ever grace the screen. For me, this is the best film Tracy and Hepburn ever made together. The characters feel like they truly are a married couple. Though in some cases their thinking and ideas are at opposite ends of the pole. Politically, the film was way ahead of its time. Hepburn is a feminist while Tracy play your typical chauvinist husband who thinks the wife should be in the kitchen shaking those pots and pans. Oh sure, he’s proud of her and all, but hey, enough is enough. Sometimes, after all, a woman has to be put it her place. The film also exposes the court system as lacking an equal sense of justice between the sexes.  The supporting cast of Judy Holiday, David Wayne and Hope Emerson all add to the pleasure.

I watch this film at least once a year, generally in the fall, the time of the year when the film is set. It’s a delightfully hysterical farcical comedy with dark overtones. Abby (Josephine Hill) and  Martha Brewster (Jean Adair) are two sweet little old ladies. Everyone in the Brooklyn neighborhood loves them. Living with the senior ladies is Teddy, their nephew who thinks he is Theodore Roosevelt. The big secret is  that the two sisters have a nasty little habit of killing off lonely men with a bit of elderberry wine that happens to be spiked with a touch of arsenic. There are a dozen bodies buried, so far,  in the basement. Coming for a visit is nephew Mortimer Brewster (Cary Grant) who just married his love, Elaine (Pricilla Lane). They are on their way to Niagara Falls for their honeymoon. Unfortunately, the trip is going to be a bit delayed when Mortimer discovers his aunties hobby, and the return of a third brother, the murderous and ugly Jonathan Brewster  (Raymond Massey) along with his creepy assistant, Dr. Einstein playing by Peter Lorre. It’s a delightful combination of farce and black comedy rare for its time. Click here to read the entire post. 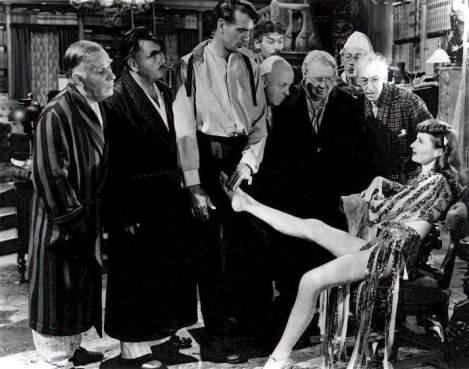 Billy Wilder is one of my all time favorite filmmakers. This won’t be the last time you will find a Wilder film in this series. Of all the classic era actresses Barbara Stanwyck has always stood out for me, in many ways. Subsequently, a combination of Wilder and Stanwyck is a surefire winner.  This is another film I wrote about a while back so jump over here to read more.

The second pairing of Bob Hope and Paulette Goddard, first being The Cat and the Canary,  is both spooky and hilarious. Like in the first film, Goddard inherits a spooky mansion located on a small bleak island just off the Cuban coast. Hope plays Lawrence L. Lawrence (the middle initial stands for Lawrence. As he says in the film “My parents had no imagination”). Here he is a radio broadcaster who mistakenly believes he shot and killed a close associate of a local gangster. This gives Larry purpose to stow away on the same ship Ms. Goddard’s character is leaving on.  The film is filled with hands that reach out from behind secret panels, trap doors, sinister individuals, ghosts and a murder. It provides a nice mixture of “old house” style horror, mystery and comedy, Hope style.

One of the most intelligent, romantic, funny screwball comedies to grace the screen. Preston Sturges opened the door for other screenwriters, like Billy Wilder, who were frustrated with directors messing with their work, and wanted to direct their own scripts. Henry Fonda manages to fall, trip, slide, and slip so many times that he seems to spend much of the film on the ground. What may be my favorite scene is when Barbara Stanwyck practically seduces Fonda by continually twirling his hair while he is reclining on the floor getting more and more flustered. One of the most seductive and sexy scenes ever filmed. I was breaking out in a cold sweat just watching! 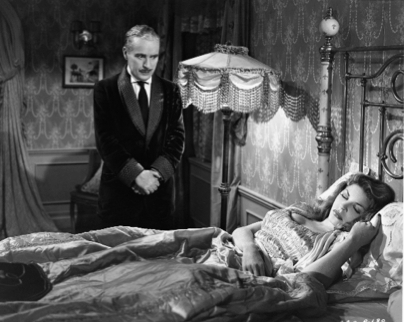 I have called  Monsieur Verdoux: A Comedy of Murders  Charlie Chaplin’s best film. If it’s  not his best, it is certainly one of the best. Chaplin was way ahead of his time with this brilliant black comedy . It was unlike anything else he made. Little traces of his well known  sentimentality.  In its place, he had a mass murderer. You can read my complete review by clicking here!

Barbara Stanwyck again! Yep, she is my favorite actress of the period, and Remember the Night is one of my favorite films for the Christmas season. Stanwyck was always at her best when her character came from the wrong side of the tracks. She seemed to have a natural affinity for those whose lives have mostly been filled with hard times, scrapping by the best way they can. Maybe, it had to do with her sad Brooklyn upbringing, her mother dying when she was four, pushed from a streetcar by a drunk, and her father leaving only weeks later, never heard from again. That kind of pain has to leave an indelible mark on one for life. Yet, beneath the tough exterior would hide a gentle desirous heart longing for acceptance and love that would eventually reveal itself. This double side of Stanwyck’s persona is clearly on display in many of her films including this 1940 holiday comedy/drama. Here is my complete review.

To Be or Not to Be 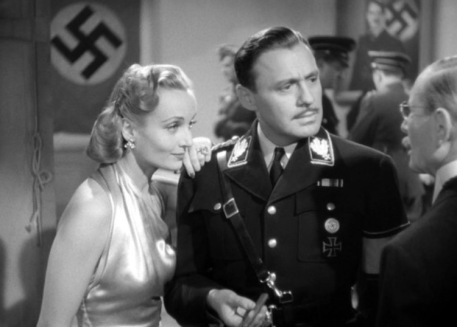